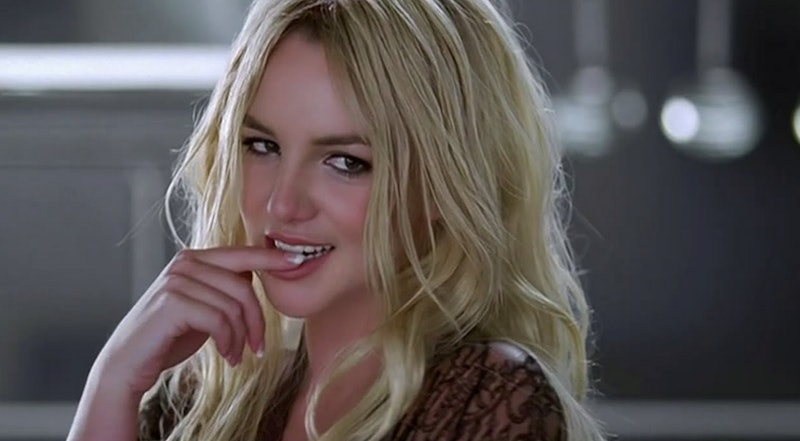 As one of the quintessential matriarchs of pop music as we know it, it's no surprise that Britney Spears has some boss music videos to back up her legion of hot tracks. One of my personal favorite song-and-video pairings from Ms. Spears is "Womanizer" from 2009. I never knew that philandering lovers could make you want to get up and dance, but Spears' music video certainly accomplishes the task. All I remember from when the video premiered is that it featured a lot of staple Spears dance moves, a plethora of costume changes, and various aesthetically pleasing spectacles operating at a pulsing clip. In other words, I remembered it being AWESOME. As an avid fan of both Spears and nostalgia, I decided to take a gander at the video today for the first time in years.

Oh. My. Gawd. There was a lot going on in that video. From office hijinks, to a skilled maraschino cherry moment, and a decidedly confused office employee, I would have to say this is one of Spears' finest works to date. You probably remember that the nearly four minute spectacle involved Spears going incognito to seek revenge on her cheating boyfriend, but there are several titillating tidbits that you may have not been able to fully appreciate after only one viewing — I know I didn't. Let's take a walk down memory lane and behold 11 moments from "Womanizer" that we all forgot about.

1. It Started Out Pretty NSFW

It's Britney, b**ch! Less than 10 seconds into the video, a naked Spears shows us that her schoolgirl days are long behind her. Work it!

Clearly, the womanizer in question (i.e., the dude reading a newspaper in his boxer briefs) can't take the SUPER OBVIOUS hint that Spears is onto his cheating ways.

3. The Womanizer's Office Had Terrible Coffee

He was not pleased — one sip warranted a stank face.

4. Spears Went (Sort Of) Incognito At The Womanizer's Work

Come on, dude. I know she's wearing a wig and glasses but can you honestly not recognize your own girlfriend? Also, rather than be phased by the sudden presence of a dancing vixen, all the office employees simply join in with some intricately choreographed moves. No case of the Mondays, here!

6. This Guy Who Was Understandably Perplexed By Everything

Finally, someone has an appropriate reaction to all the mayhem.

All my love goes to the guy doing a back bend whilst removing his jacket.

9. Spears Used Her Foot To Steer A Limo

Although I wouldn't condone anyone getting behind the wheel to try this move, it does make for a pretty sweet shot.

10. The Womanizer Got Caressed With A Stiletto

It takes almost the entire video for this guy to realize something suspect is going on, but this moments marks the point where he becomes appropriately terrified.

11. When The Womanizer Gets Woman-Handled By All Three Of Spears' Personas

Cheaters everywhere, take note: if you screw around on your girlfriend, three different versions of her will show up and terrify you. OK, that's not actually possible, but don't cheat. Mmmkay?