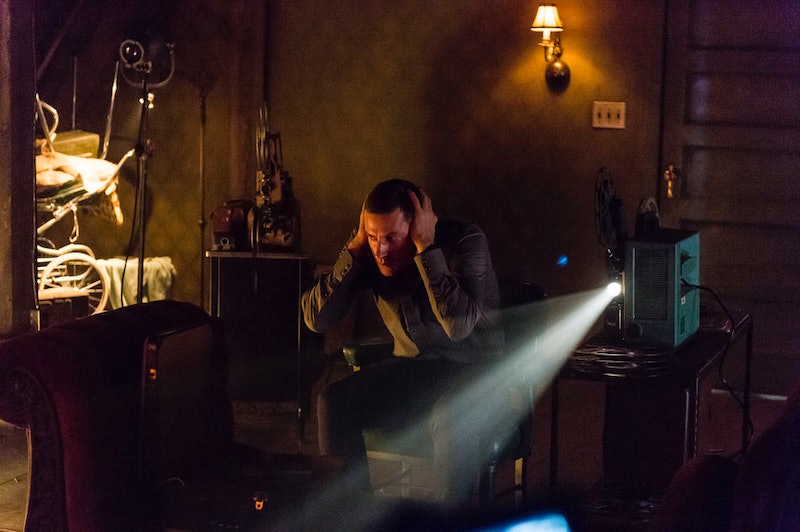 The beginning of the hour showed us the birth of the titular serial killer who privately deems himself "the Red Dragon" — but who is given the humorously emasculating nickname "the Tooth Fairy" by the local press. Played by Richard Armitage (yes, that's The Hobbit's Thorin Oakenshield as a full-sized human), Francis Dolarhyde is a force to be reckoned with, possessing an enviable physique, a terrifying tattoo, a truly hideous set of chompers... and a compulsion to slaughter entire families in their homes.

This is actually the third onscreen portrayal of Dolarhyde, after having been played by Tom Noonan in Michael Mann's 1986 film Manhunter and by Ralph Fiennes in Brett Ratner's 2002 film Red Dragon. And while all the familiar trappings of the character will be present to readers of Harris's oeuvre, the grace notes are entirely Fuller's: the prolonged opening shot of the killer flexing his power by cracking his knuckles; the sight of a blood-soaked Dolarhyde howling at the full moon; and the surreal imagery of him wrapped in celluloid, light pouring from his orifices.

But the introduction of the titular killer wasn't even the most shocking event of the hour. Following the opening credits, the show jumped ahead three years into the future — a time jump many Fannibals knew was coming, but was no less jarring for it. Hannibal is prison, enjoying tête-à-têtes with Drs. Chilton and Bloom; Special Agents Zeller and Price are back with their concomitant comedic relief; and, mostly shockingly of all, Will is happily married to a woman named Molly and is a devoted stepfather to her 11-year-old son.

But thanks to Dolarhyde's slayings, Will's happy domestic life doesn't last very long. Jack Crawford wastes no time in pulling Will out of retirement, hoping to stop any further killings. And with Will's return to the field comes another aspect of Hannibal that has thus far been missing in Season 3: the profiler's trademark pendulum-swinging crime scene reconstructions. Fuller's Grand Guignol of a series has always been known for pushing the envelope when it comes to stylized violence and gore; but the veritable orgy of blood that viewers encountered in the home of the slain Leeds family may have take the cake... once again raising the question of how the heck Fuller is managing to slip past network television censors. (Might the show's negligible ratings have something to do with it?)

Realizing he's been out of the field too long to solve this case on his own, the episode ended with Will heading to the Baltimore State Hospital for the Criminally Insane to seek advice from his old frenemy, Hannibal Lecter. If "The Great Red Dragon" itself was more prologue than main course, it was a decidedly juicy one. We have yet to hear Dolarhyde utter a single word (only some truly unsettling howls) and the ending simply teased at the coming confrontation between Will and Hannibal. But for those viewers frustrated by the slow-burn pace of Season 3's first half — and for those viewers intent to savor every last drop of Hannibal before it airs what will likely be its series finale in five weeks — this was an immensely satisfying appetizer.

More like this
The ‘Squid Game’ Season 2 Renewal Teases A Creepy New Figure & A Return
By Brian Anthony Hernandez and Bustle Editors
Everything We Know About When To Expect Money Heist: Korea Part 2
By Kadin Burnett
Wait, What’s Going On With Ben In That Umbrella Academy Season 3 Post-Credits Scene?
By Gretchen Smail
Viktor Hargreeves’ Coming Out Scenes Are The Sweetest Part Of Umbrella Academy Season 3
By Gretchen Smail
Get Even More From Bustle — Sign Up For The Newsletter