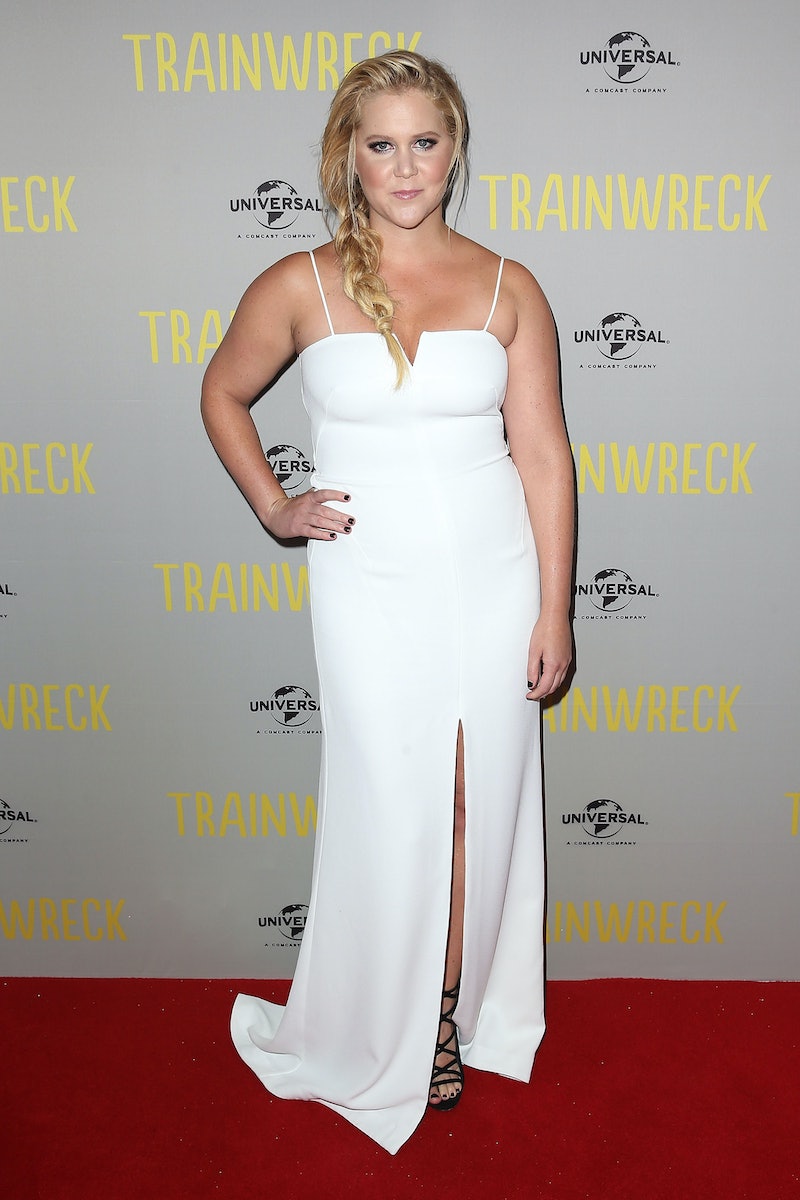 Amy Schumer may be a self-proclaimed train wreck, but she is a train wreck that has gone up in white hot flames — an entertainment collision of epic proportions that the world can't stop looking at or buzzing about; and don't even get me started on Amy Schumer's fashion. It is undeniable that the comedian boasts her own unique, obsessed-over brand of sarcasm, real talk, and wit, but Schumer's style game is also on point, people. From Trainwreck permieres to appearances on late night TV to her ever-popular tour of stand up shows, the leading lady of late has been making the rounds and is proving she is as fashionable as she is funny.

The best part about Schumer’s style is that her humor and I-don’t-give-an-eff-what-you-think confidence shine through in everything she wears. Clearly, she doesn’t take herself too seriously and her larger than life personality and fierce fashion sense are a killer combination. Schumer’s off-the-cuff real talk and talent are obviously what make her the star millions want to befriend, but here are nine reasons she is also as stylish as she is hilarious. It is definitely time to give props where props are due on the fashion front because, quite frankly, girlfriend has been killing it.

1. Her LBD Game Is On Point

2. She Wears Black And White Geo Like A #GirlBoss

Black and white and geo all over + a messy bun = mod perfection.

You know you've made it when you have your name emblazoned on the back of a leather jacket in studs. She's basically Kimye marriage life status.

4. She Isn't Afraid Of A Little Sideboob

Sideboob can be a tricky trend to pull off, but, as with everything else, Schumer fearlessly goes all in with an expert side flash.

5. Her Crown Braid Game Is Fierce

Never mind that she is posing with an actual real life koala, which ups her coolness factor yet again, or practically glowing in a totally mod black and gold dress, her crown braid is b-a-n-a-n-a-s. #HairGoals.

6. She Rocks A Well-Placed Cut Out

Cut-outs and Lebron James: 2015's hottest must haves. The power of a woman who knows the value of a well placed cut out, whether bare-skinned or mesh covered, obviously knows no bounds.

7. Her Co-ords Are On Fleek

Schumer may joke for a living, but she has a serious co-ord game.

8. She Is A Badass Queen Of Bodycon

Not only did she shut down Hollywood movie execs when they wanted her to go on a diet in preparation for her Trainwreck role, she regularly rocks a bodycon dress to show off everything her mama gave her.

9. She Plays With Androgyny

Schumer seems to realize that "borrowing from the boys" is an antiquated way of thinking about gender roles in fashion, and always looks chic while sporting traditionally masculine pieces like this tuxedo jacket dress.

Clearly, Schumer's penchant for stringing together hilarious words that no one else has the gumption to say and her impeccably confident style are both a tornado-sized breath of fresh air. You keep doing you, Amy.

More like this
Amy Schumer Is Actually The Other Kardashian Sister You Never Knew About
By Jake Viswanath
Iris Law's Skunk Mullet Is Not For The Faint-Hearted
By Tomi Otekunrin
Machine Gun Kelly Wore A $30K Diamond Mani To The BBMAs
By Paris Giles
How To Master Baby Braids, According To TikTok
By Tomi Otekunrin
Get Even More From Bustle — Sign Up For The Newsletter