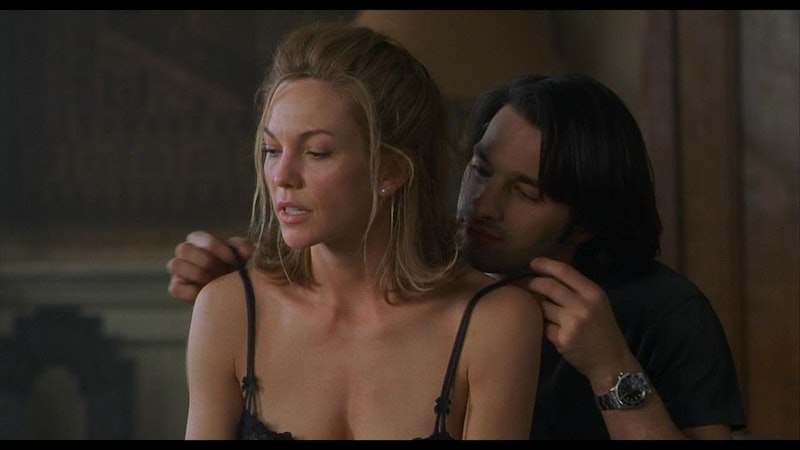 A young woman (Tang Wei) who is a secret agent in World War II is tasked with seducing a dangerous enemy official (Tony Leung Chiu Wai). A thrilling forbidden romance follows. Due to the explicit sex scenes in the film, it was given an NC-17 rating in the United States. Director Ang Lee received the Golden Lion Award for the film at Venice Film Festival, his second time wining the award after having won it for his 2005 film Brokeback Mountain.

Shame is a movie about a seemingly successful man Brandon (Michael Fassbender) with a dark secret: He is a sex addict whose addiction has infiltrated his life to a numbing degree. The film follows Brandon as he navigates the sexual urges in his life, while simultaneously dealing with the complicated nature of his relationship with his sister, Sissy (Carey Mulligan), when she comes to town and crashes with him. The sex scenes are so intense that the movie received a NC-17 rating in the United States.

Two decades ago, director Paul Verhoeven shocked audiences with this neo-noir, which featured Sharon Stone as the bisexual femme fatale Catherine Tramell. When Catherine is linked to the murder of a rock star, homicide investigator Nick Curran (Michael Douglas) begins a peculiar relationship with the suspect while trying to maintain some semblance of order in the case that only gets more and more complicated as the film continues. Stone’s now-infamous scene in which she opens her legs while being interrogated has become one of the most popular sexy scenes in modern film.

Bare is about a 20-something woman named Sarah (Dianna Agron) who sparks a friendship with a drug-dealing drifter named Pepper (Paz de la Huerta) and gets pulled into her lifestyle of partying, stripping, and drugs. Leaving her quiet life and boyfriend behind, Sarah begins a intoxicating relationship with Pepper, but soon learns that not everything is always as it seems and that her old life can easily come back to haunt her.

This film tells the story of a self-diagnosed nymphomaniac played by Charlotte Gainsbourg, who recounts her sexual history to a man who finds her beaten up in an alley one night. Once you finish the first part of the film, make sure to watch Volume 2, as it was made into two volumes but tells one story.

The love scenes might not be as racy as every other movie on this list, but the storyline is still pretty intense. Two lifelong best friends (Robin Wright and Naomi Watts) begin steamy affairs with each other's teenage sons. The movie follows the two families over the course of many years, documenting life-changing moves, having children, and facing heartbreak.

Two strangers, John (Mickey Rourke) and Elizabeth (Kim Basinger), become involved in a new relationship. It begins as a courtship, but becomes extremely sexual, as John begins to push for more daring and kinky scenarios including striptease and bondage on Elizabeth. In some ways, this is like the '80s version of Fifty Shades of Grey, and some might say it’s even sexier, with more genuine chemistry between its leads.

Stuck in a rut of mediocrity, piano teacher Erika falls in love with the illusion of an affair with her 17-year-old student. The romance escalates between the two and sexual fantasies that Erika has only dreamed of are explored.

This movie, is hot, hot, hot. Edward (Richard Gere) plays a husband who finds out his wife, Connie (Diane Lane), has had an affair with a stranger she encountered randomly. As he learns more about the adultery, he is met with the realization that he has harbored a rage within that rears its head in a moment of passion.

A one-night-stand turns out to be something more in this minimalist feature. The film takes place over the course of a few years, following the affair between Chris Messina's character and Marin Ireland's character as the two meet in hotel rooms.

Princess Tara (Sarita Choudhury) becomes engaged to King Raj Singh (Naveen Andrews), but, after the wedding, finds out her maid Maya (Indira Varma) has slept with Raj on their wedding night because of Tara's treatment of her. Maya is sent away from the palace, but her sexual and sensual nature lures Raj to her in a hedonistic pursuit.

16. In The Realm Of The Senses

In the Realm of the Senses is about a woman at a traditional Japanese brothel who falls deeply in love with one of the main proprietors. The journey unravels in a twisted path of erotics and fetishes.

Stream In the Realm of the Senses here.

Yes, this movie may not be full of blindfolding and whips like Fifty Shades, but the pure romance and genuine love scenes are sexiness at its best.

This article was originally published on July 11, 2017