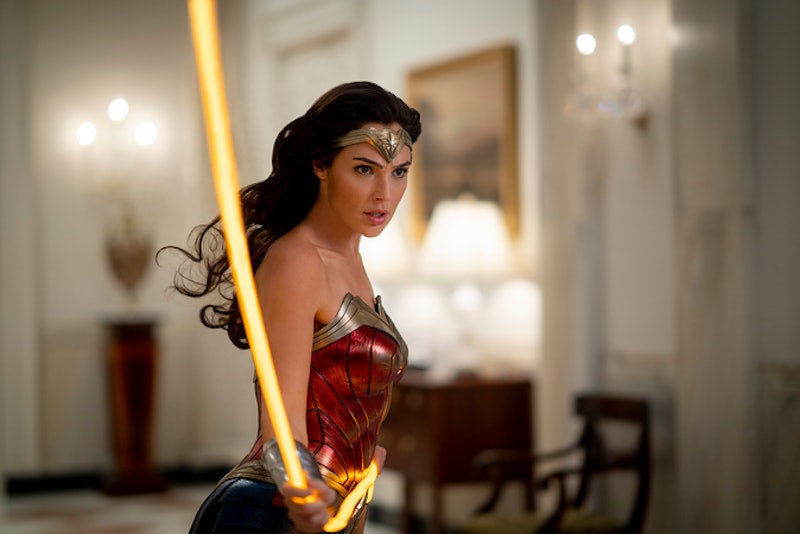 Spoilers ahead for Wonder Woman 1984. The latest DCEU film has brought the world into chaos and righted it again, so it’s time to discuss Wonder Woman 1984 — especially now that Wonder Woman 3 is officially on the way. The superhero flick debuted on Dec. 25 in theaters and on HBO Max, and even made a strong showing at the box office in spite of the ongoing COVID-19 crisis. With so many fans following the latest heroics of Diana Prince (Gal Gadot), questions have been raised and WW1984 theories have been formed.

The film follows Diana as she and a new colleague, Barbara (Kristen Wiig), encounter an unusual stone and discover that it has the power to grant wishes — at a cost. After Diana inadvertently brings back her lost love, Steve Trevor (Chris Pine), in the body of another man, the two realize they need to do more digging. They discover that the failing business mogul Max Lord (Pedro Pascal) has taken the dreamstone for his own selfish (and dangerous) ends. It’s up to them to stop him, but Barbara is ready to do whatever it takes to prevent that from happening. When all is said and done, it’s a victory for the side of good and truth, but that doesn’t mean everything is resolved. Fans had theories based on where the story left off.

1. Diana Is Single And Maybe Ready To Mingle

After more than 60 years and not one but two heartbreaking goodbyes with Steve, Diana may have reached a point where she is open to a new love interest. While she told her flyboy she’d never love again, he made it clear he hoped she would. Whether or not she took it to heart, some fans certainly have. There’s already speculation that she could strike up a romance with any of her love interests from the comic books, such as Superman, Batman, or Tom Tresser (aka Nemesis).

2. A Lack Of Wish-Renouncing Could Be A Problem

Saving the world in Wonder Woman 1984 relied on Diana getting through to everyone about the cost of their wishes. Realistically, though, would everyone have renounced their wishes? Many people on Twitter say no, and they make some valid points.

Again, it seems very possible that some people would choose not to renounce their wish. In fact, we saw Barbara do just that when Diana appealed directly to her. That final speech probably wouldn’t have moved her, either, so even though she no longer looked like Cheetah at the end, that doesn’t mean she’s truly back to normal. One Twitter user theorized that because Barbara made a wish to be like Diana before Max became the stone, she might have lost her cat-like form while still retaining her super strength, etc. That would make it easy for her to be brought back in Wonder Woman 3 to continue to cause problems for Diana as she does in the comic books.

When Max wished to become the dreamstone, the citrine part disintegrated, leaving just the base that Diana found on his desk. Presumably, it would have formed again once Max renounced his wish, as one Redditor pointed out. Could it still be out there? That might matter in the future. After all, some fans thought the movie was seeding an appearance by the god who created it, but that didn’t happen in WW1984.

5. Asteria And Diana Could Team Up

When Diana told Steve about Asteria, the great warrior who wore the gold armor while defending her fellow Amazons, she noted that she found the suit but never the woman. Then, the mid-credits scene revealed Asteria is still alive and well — and played by the legendary Lynda Carter. Fans loved that cameo, and many are hoping that it means Diana will team up with a fellow warrior in the final installment in the series.

Wonder Woman 3 is on the way, so anything is possible.

More like this
What’s New On Netflix: Ana De Armas’ 'Blonde' & A Nick Kroll Special
By Arya Roshanian
12 ’90s Movie References You Missed In 'Do Revenge'
By Radhika Menon
Florence Pugh Reflected On Her ‘Don’t Worry Darling’ Experience On Opening Day
By Brad Witter
How To Stream 'The Woman King'
By Morgan Leigh Davies
Get Even More From Bustle — Sign Up For The Newsletter