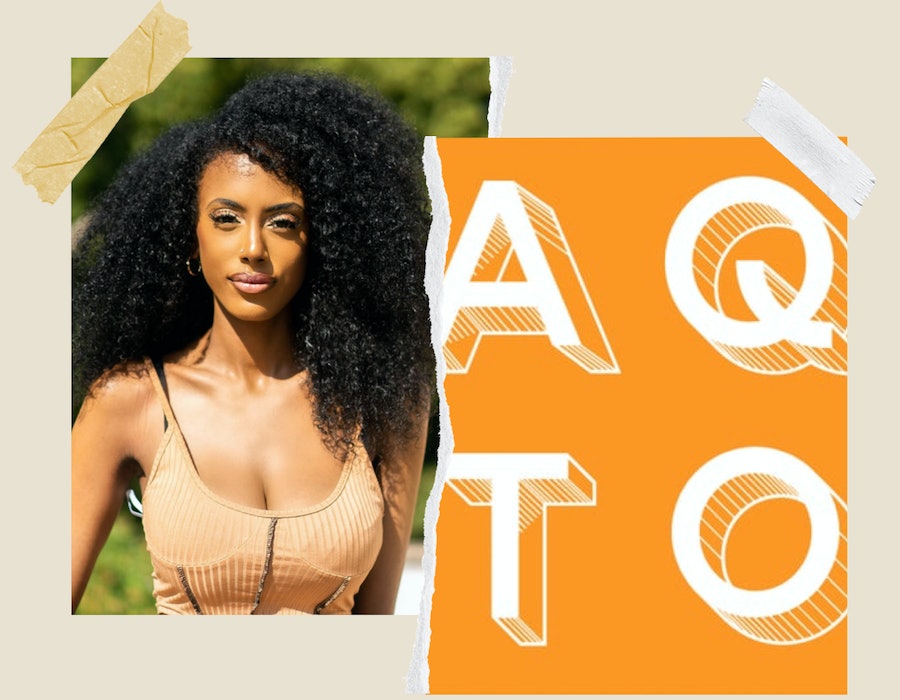 “I want to evoke joy, and nostalgia, and home,” says Magdalene Abraha, when I ask about the motivation behind her work. She may be only be 26, but in her career as an award-winning writer and publisher, she’s already gained a wisdom that surpasses her years. Her aim? To archive and tell the stories of Black people in Britain as authentically as possible.

Abraha started out as a journalist, becoming one of the Independent’s youngest columnists, before finding her place in publishing. She won the London Book Fair Trailblazer Award in 2020, and now, she’s launching a new series titled A Quick Ting On (AQTO). As we chat over Zoom, it’s clear that she has a real passion for her community, driven by a collaborative approach to storytelling.

First announced in 2019, AQTO is an eight-book series that explores Black culture, told from the perspective of young Black voices in the UK. Topics range from Afro hair to Black businesses, Grime to Afrobeats, the Black British power movement to plantain – there’s so much to dig into, and yet, Abraha promises there’s lots more still to come.

While she’s been the editorial and marketing manager for non-fiction at Jacaranda publishers since 2019, getting into the industry wasn’t easy. “I was very ignorant and naive,” she tells me, describing the the publishing scene as a “massive culture shock” at first.

“I thought maybe it’s not the industry for me, because it’s not inclusive. And then I thought, actually no. If I’m going to be in this industry, let me try and do my bit.”

Her main issues came down to a lack of diversity. In 2020, #publishingpaidme revealed the pay gap disparity between Black and white writers, and a report by the Publishers Association found that only 13% of respondents identified as BAME, per the Guardian.

“I thought maybe it’s not the industry for me, because it’s not inclusive,” Abraha muses. “And then I thought, actually no. If I’m going to be in this industry, let me try and do my bit.” She set out to create opportunities for people who might not see themselves as writers, and to provide “safer spaces for extensive Black storytelling.” And that’s exactly what she’s done.

The AQTO series introduces new names, including producer Tobi Kyeremateng, who writes A Quick Ting On Theatre Sh*t: Reimagining Black British Theatre, and model and jewellery designer Sophie Tassew, who dives deep into street fashion and its hidden meanings in A Quick Ting On: Bamboo Earrings. “I think for me, the most important thing was that the writers cared deeply about the project,” says Abraha. “It's about finding stories in unconventional ways, because everyone has a story,” she adds.

AQTO was originally due to be published in 2020, but as with so many other releases, it was pushed back and the first book in the series (A Quick Ting On: Afrobeats) was released on October 7 this year.

“It's about finding stories in unconventional ways, because everyone has a story.”

“It was a very intense period for a series that is centred around Blackness,” Abraha explains, reflecting on the real-time shift in the lives, culture and stories of Black people in the last 18 months. She notes that the delay in publication gave the writers a chance to reflect, recalibrate, and rewrite. “It's such a contemporary series, so much of the content had to adjust and change.”

Although the series doesn’t shy away from tackling important subjects, overall AQTO is an uplifting reflection of the Black community’s shared understanding. “At times the stories are really funny, other times they take you back to secondary school,” Abraha smiles. “Sometimes, I’m laughing. A lot of times I'm sad.”

She plans to continue building on the AQTO series, she says. “What Black Britishness means expands so quickly, and it's already changed so much. The whole premise is that it will go on forever, when we’re all old and grey there will still be more coming out.”

“What Black Britishness means expands so quickly, and it's already changed so much.”

On her aspirations for Black writers, she says, “I hope Black writers are always able to choose what they want to write about, and that there isn't a ceiling on the subjects they can explore and the way they can explore them. We have such a rich history, and I think it's really important to not forget about those who have come before us. We should continue to support those works because books last forever, writing lasts forever.”

Her best advice is to seek out Black-owned publishing houses, bookshops and imprints – “It’s about supporting those.” I ask if she will ever set up her own publishing house? “Oh, that’s a good question,” she laughs, giving nothing away. “And, I'll end it there!”