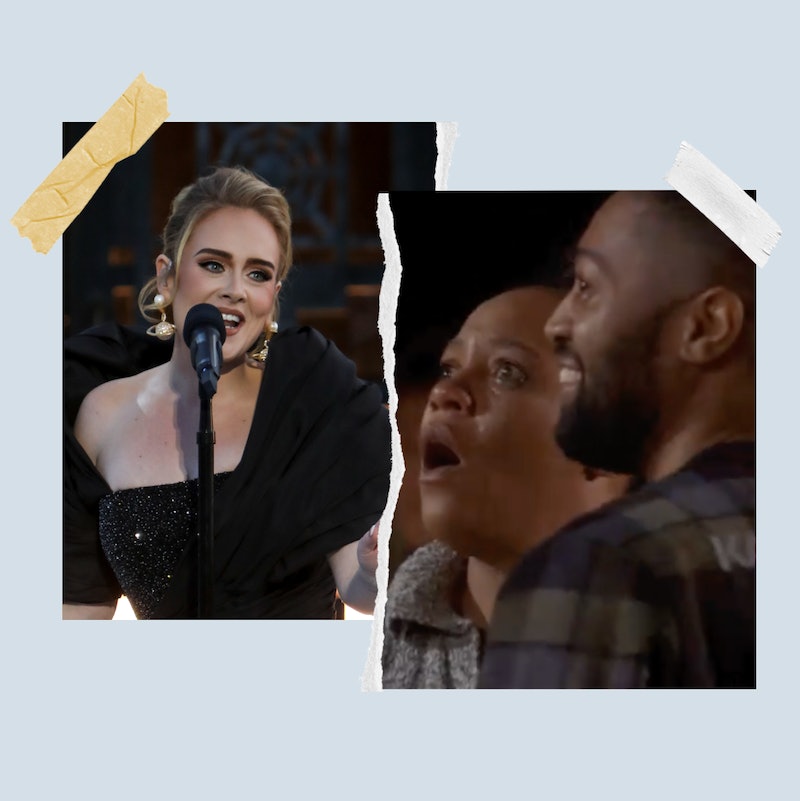 Adele’s latest album, 30, may be about “divorce, babe” — but during the televised Adele One Night Only special, the “Easy on Me” singer proved that she still very much loves love by assisting in what may be the most romantic proposal ever. Adele event noted that it was all “a bit ironic.” Here’s how the surprise proposal went down: First, Adele told the crowd of celebs to be quiet as Quentin and his blindfolded girlfriend, Ashley, made their way up to Griffith Observatory, where the show was taking place.

Ashley removed her blindfold as Quentin got down on one knee and delivered his romantic proposal, but because the lights were still dimmed at the observatory, so she had no idea how many stars were watching the sweet scene play out. “Who are these people?” she asked, as she heard laughs throughout the crowd. “Thank god you didn’t let me eat, I would’ve thrown up.”

As Quentin finally asked, “Will you marry me?” Adele came out on stage to sing “Make You Feel My Love,” and the newly engaged couple took their seats in the front row — super casually seated next to Lizzo and Melissa McCarthy, who offered congratulations and a glass of champagne.

Adele seemed as relieved as Quentin by the successful proposal. “Thank god you said yes,” she said from the stage, “because I didn’t know who I was gonna have to sing this song to next ... look at her, she’s so in shock!”

The emotional surprise had Twitter crying, too. “This Ashley and Quentin moment has to be among the best produced tv surprises I’ve ever seen in life,” tweeted entertainment journalist Chris Witherspoon. “No pressure Quentin and Ashley,” wrote user youfoundbethany, “just the whole word rooting for you!”

Clearly, Adele’s music is enough to make you (and Quentin and Ashley, and the entire world watching at home) feel her love. The 30 era ahead is sure to deliver plenty of songs and lyrics worth crying to, but there’s still room for happy, heartfelt moments here and there.