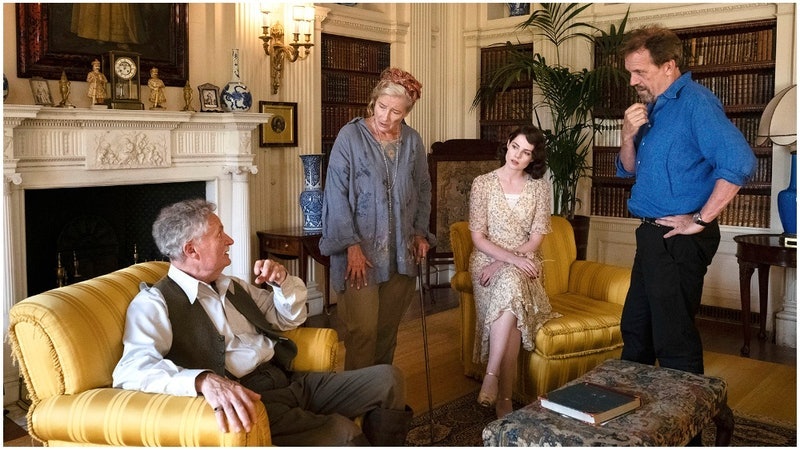 This article contains spoilers for Why Didn’t They Ask Evans?, the book and TV show

Penned by the queen of crime herself, Agatha Christie, back in 1934, Why Didn’t They Ask Evans? first hit screens back in the 80s and again in 2011. But streaming platform BritBox has delivered a brand new iteration of the bestselling novel.

House’s Hugh Laurie directs and stars in the TV adaptation, with The Ipcress File’s Lucy Boynton and Will Poulter (The Chronicles of Narnia: The Voyage) rounding up the lead cast.

But enough about the TV series, let’s focus on the original material. Here’s everything you need to know about the the Why Didn’t They Ask Evans? book, and how it ended.

The story starts when Bobby (Will Poulter) stumbles across a man lying at the bottom of a cliff. Assuming the man fell, Bobby goes to check on him. The man dies, but not before asking Bobby one vital question, “Why didn't they ask Evans?”

A quick search of the man and Bobby discovers no identification, just the photograph of a beautiful woman in his pocket. Bobby leaves the man with a helpful stranger, Roger Bassington-ffrench.

Certain that this was no accident, Bobby partners up with his childhood friend, Lady Frances 'Frankie' Derwent (Boynton), to investigate. But, the amateur detectives soon discover that they’re way out of their depth.

The dead man is claimed to be Alex Pritchard by his sister, Amelia Cayman, who admits to being the woman in the photograph. But when Bobby spots an article in the local paper with a different image than the one he saw, Bobby and Frankie realise that Bassington-ffrench swapped the photographs and that Amelia is not related to ‘Alex Pritchard’ at all.

Bobby and Frankie decide to search for Roger Bassington-ffrench, tracking him to Roger's brother, Henry, and his sister-in-law, Sylvia’s home, where they feign a car accident hoping Frankie will be invited to stay at their house to recover. After Frankie produces a newspaper cutting about the mysterious dead man; Sylvia remarks that he looks like Alan Carstairs, a traveller and close friend of John Savage, a millionaire who had killed himself after learning he had terminal cancer.

Frankie meets Henry’s neighbours Dr Nicholson and his younger wife, Moira — who turns out to be the woman that Bobby had seen in the photograph. She admits to knowing Alan Carstairs, the real identity of the dead man, and Roger reveals that he recognised Moira and wanted to avoid scandal for her, so he took the photo.

It seems like the mystery of the photo is solved but, when Frankie returns to Henry and Sylvia’s house, she finds Henry dead from an apparent suicide.

Frankie thinks the answers to the mystery of the man’s death lie in the will of the late John Savage. She discovers that he left all of his money to Mr and Mrs Templeton when he became convinced he had cancer (although one specialist told him he was perfectly well). After he died by suicide, Carstairs was on the hunt for the mysterious Templeton.

Bobby and Frankie trace the witnesses to the signing of John Savage's will, hoping to discover who exactly the Templetons’ are. Finding the former cook and gardener of Mr and Mrs Templeton, the pair discover that the cook and gardener never met Mr Savage before the signing, while the parlourmaid did and would have realised that it was Roger in the "deathbed" who wrote the will and not Mr Savage.

The parlourmaid’s name? Gladys Evans, hence the reason for Carstairs' question, "Why didn't they ask Evans?"

Confused? We don’t blame you. Why Didn't They Ask Evans? Is a complicated story, packed with twists and turns.