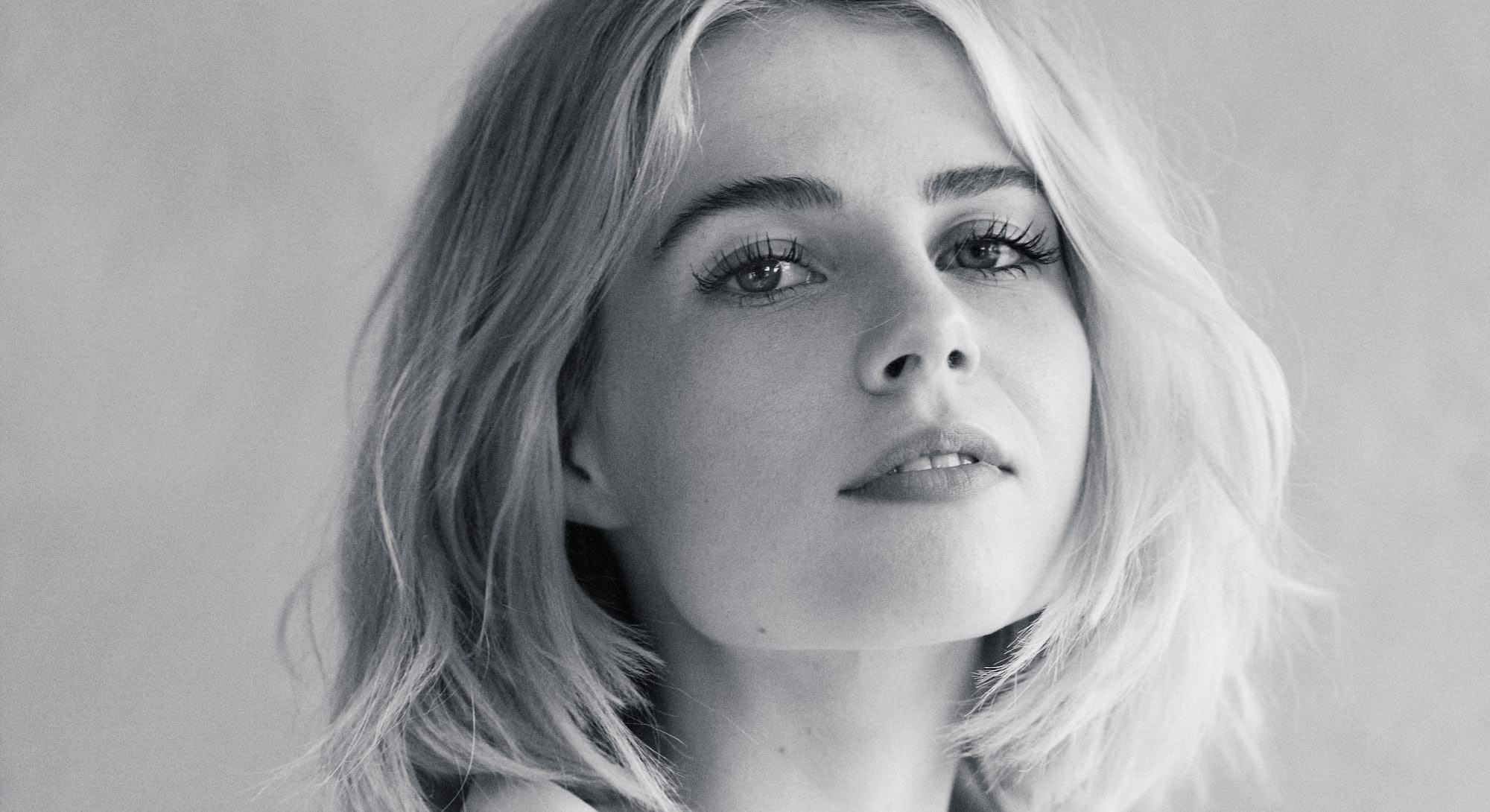 Lucy Boynton and I kick off our call in a classically British fashion: by talking about the weather. “I’m trying to soak up as much sunshine as I can before heading back to London [from Los Angeles].” Looking out at the grey and stormy skies beyond my window, I feel compelled to tell her that she might want to extend her trip a little. Though born in New York, Boynton was raised in London from a young age (her parents, both journalists, are English) and came to acting early on. Her on-screen debut was at the age of 12, when she portrayed a young Beatrix Potter in the 2006 children’s film Miss Potter.

“I don’t think of myself as a former child star. I think it’s a Britain vs America thing,” she explains. “I was really lucky to grow up somewhere like London, where you walk down the street, and you have no idea what anyone does for a living. It feels more like a job than a lifestyle.” Still, Boynton made a smooth transition from child-to-adult actor, going on to appear in high-profile projects such as the Queen biopic Bohemian Rhapsody, in which she co-starred with her real-life boyfriend Rami Malek, and Netflix’s The Politician. Now, the starlet has taken on the role of Jean Courtney in ITV’s six-part adaptation of espionage tale The Ipcress File.

While the 1965 film of the same name holds somewhat of an icon status, in no small part thanks to its lead performance from Sir Michael Caine, this latest reimagining is based on the original book. A talented spy from a privileged background, Jean is a force to be reckoned with in the male-dominated environment she inhabits. When we first meet her, she’s engaged, and due to abandon her life in London for her future husband’s job in New York. But Jean, a young woman of the new ‘60s, rebels against tradition, choosing to follow her own path. This flash of feminist liberation, and the gender politics Jean faces as a working woman — a female spy, no less — heavily influenced Boynton’s approach to the role.

“The easiest way to discredit a woman is to say that she’s ‘emotional,” Boynton remarks. “Jean had to guard herself against that, so I made her really steely. I wanted her to operate like a man in that environment.” Noting how women are always expected to be warm and approachable, the actor marvels at the response she’s had to her thought-out portrayal. “I’ve been told, ‘Oh, gosh, Jean really doesn’t crack a smile, does she?’ I’m as frustrated as I am satisfied with that feedback. I played her like a man in that environment, and people would never say that of a male character, so it proves my point.”

As well as being drawn to the series’ exploration of gender politics, Boynton was also lured by the chance to live in the ‘60s for a while. The 28-year-old has a particular fondness of the era, and it’s a good job too, as she’s playing ‘60s icon Marianne Faithful in an upcoming biopic. In The Ipcress File, Jean is undoubtedly the fashion focal point, sporting chic ensembles that look as though they came straight from a Mary Quant ad campaign. Boynton’s not shy about telling me she wanted to keep the “entire” wardrobe.

“When you think of a spy, you think of them wearing muted colours, and trying to camouflage into the background. But as a young woman in that era, who’s consistently underestimated, Jean can hide in plain sight,” the actor notes. “When you see Jean walking down the street, you do not assume she’s the assassin who’s coming after you. As a result, she gets to wear these bright, empowering colours and shapes.”

Hiding in plain sight is a little more difficult for Boynton. It doesn’t help, either, that she’s dating a high-profile actor. How does she deal with the fame and the interest in her personal relationship, I ask? “I can understand the intrigue,” she explains. “I feel the same towards actors whose work I like, I’m intrigued as to who they really are. But it’s also counterproductive to offer that information as an actor. The whole point of my job is to suspend your disbelief so that you can accept me as a character. If you know way too much about me, that becomes more difficult to achieve.”

“I’ve been told, ‘Oh, gosh, Jean really doesn’t crack a smile, does she?’ I’m as frustrated as I am satisfied with that feedback. I played her like a man in that environment, and people would never say that of a male character, so it proves my point.”

As such, Boynton tries her best to keep certain aspects of her life away from the glare of the public. “There are so many benefits to social media, but again, oversharing myself is not what I want,” she explains. “It’s not hard for me to pull back, I’m inherently a private person. I just let the work speak for itself.”

In the early stages of her career, Boynton used to feel the weight of the rejection and criticism she faced. But she has since relieved herself of that burden. “Ashley Thomas [who plays Paul Maddox in The Ipcress File] told me that one of the rules he lives by is: ‘Don’t take anything personally. It’s not about you.’ As soon as you release yourself from that sense of ego and pride, you free yourself from a lot of pain.” Particularly useful for Boynton as she navigates the last two years of her 20s. “I’m feeling f*cking great about [turning 30],” she tells me emphatically. “The older I get, the calmer I feel. Your 20s are so chaotic. You’re emerging into the world as your independent self, and trying to find your place. You have to figure out who you are, what you feel, and what you want, as opposed to what you’ve been told.”

Musing on the topic some more, Boynton concludes: “I’ve always heard that ages 27 to 30 are really informative years. So far, I’ve found that to be true. Speaking to people who are 30 and over, they seem to feel less self-conscious. I’m definitely looking forward to having increased clarity and peace.”

I think we can all relate to that desire, can’t we?