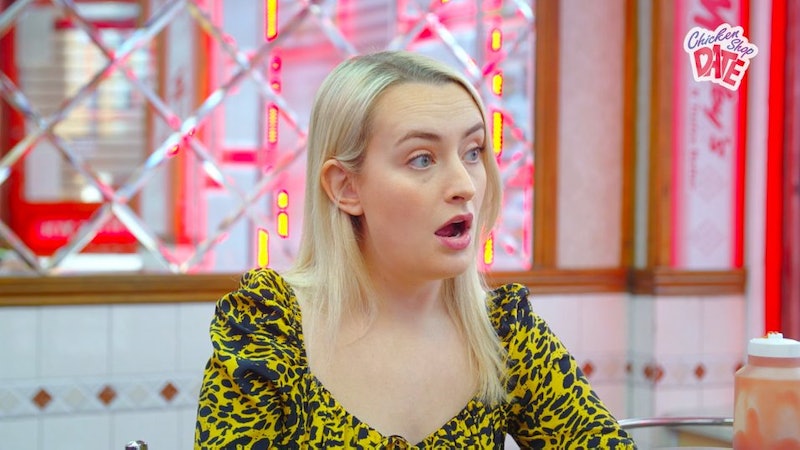 Since starting her Chicken Shop Date series in 2014, Amelia Dimoldenberg has demonstrated her knack for sharing a vibe with her dates, including the likes of The 1975’s Matt Healy, Jack Harlow, Ed Sheeran, and even Louis Theroux – the latter resulting in a brief rap from the presenter going viral and trending as one of TikTok’s top songs of 2022. Dimoldenberg evidently has a lot of celeb boyfriends, most recently sharing a flirty moment with Andrew Garfield on the red carpet of the GQ Men of the Year Awards. But is she actually seeing anyone? Who is Amelia Dimoldenberg dating?

In March 2022, Dimoldenberg seemed to be dating British rapper Aitch, who was featured on Chicken Shop Date in 2019. Back then, the romantic tension was off the charts during their first meet-cute, and it wasn’t just Dimoldenberg up to her usual antics. But this year, Aitch posted a series of cryptic vlogs on TikTok featuring a mystery woman he was going on dates with, eventually revealing that it was Dimoldenberg.

In the video where they went “official,” with the rapper writing, “Yeah, you guessed it, f*** off now,” while tagging the Chicken Shop Date host. He also posted a photo of the pair together on Instagram, with the caption “Amelia Armstrong,” referencing his last name. Dimoldenberg coyly replied in the comments, “Steady on with that caption Harrison.”

Dimoldenberg also confirmed their relationship during an interview on KissFM. “We’re hanging out. I like him a lot,” she told host Tyler West. “I love that he loves me so much.” But fans quickly noticed that the pair started dating when Aitch released his song “Baby” and that Dimoldenberg was featured in its music video, leading some to believe it was all a publicity stunt.

Bustle has reached out to representatives for both for comment, but the pair later confirmed they’d broken up a month later on TikTok. However, they agree that they’d be “better as friends” and present each other with matching “best friends” bracelets after Aitch says he’ll struggle to “sit back and watch you every other week go on a date with rappers,” to which Dimoldenberg replies, “I mean, I can’t stop doing that, I love to date.”

More like this
4 Surprising Celeb Throuples That Got The Internet Talking
By Sophie McEvoy
Joey Essex Is Rumoured To Be Dating A 'Love Island' Favourite
By Sam Ramsden
Vanessa Bauer Is Reportedly Dating Her 'Dancing On Ice' Partner
By Darshita Goyal
Gemma Atkinson & Gorka Márquez Are Strictly The Sweetest Couple
By El Hunt
Get The Very Best Of Bustle/UK
Sign up for Bustle UK's twice-weekly newsletter, featuring the latest must-watch TV, moving personal stories, and expert advice on the hottest viral buys.