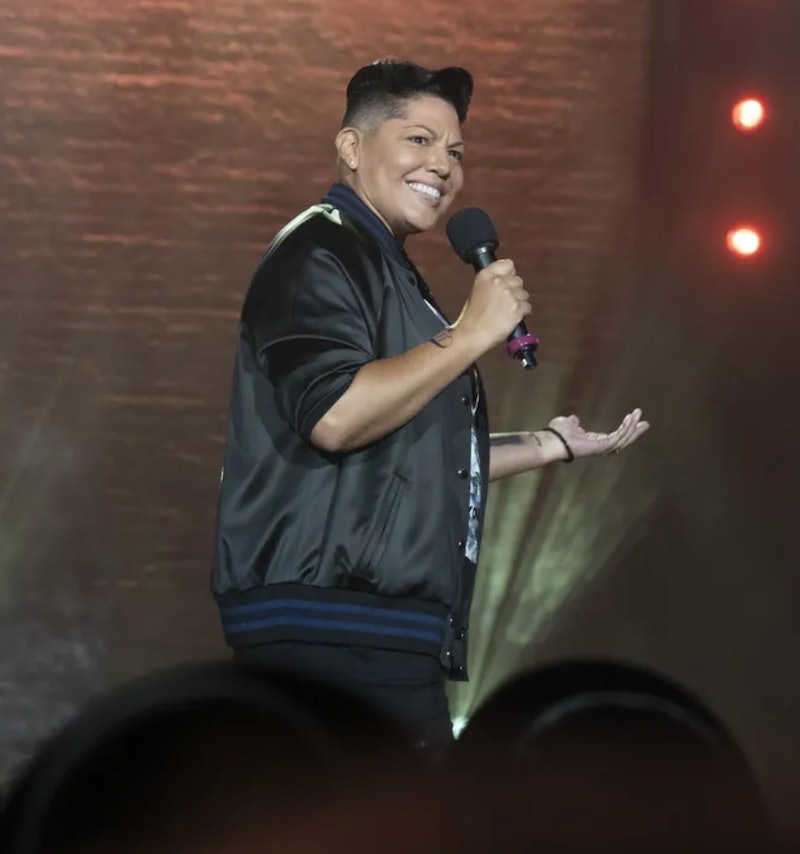 Now that the SATC reboot And Just Like That… has wrapped up its first season, there’s no denying that new character Che Diaz made the biggest impression.

Though most meme-ing around the character has been in good nature — with fans parodying the character’s habit of suddenly appearing in the middle of scenes – actor Sara Ramirez stepped away from Twitter last month as Che attracted a bunch of negativity, and only popped back briefly to thank fans for their support. “Spoiler alert: if you’re suddenly hate following me, you’re going to be sorely disappointed. There’s nothing but love in my energy field at this time,” they wrote elsewhere. “Thanks for stopping by.”

Now, Ramirez — who previously played Grey’s Anatomy’s Dr. Callie Torres, the longest-running LGBTQ+ character in US telly history — is back, and has joined in with the more light-hearted reactions by posting Che’s signature greeting, which has become their catchphrase.

Elsewhere, Ramirez expanded on the more pointed criticism in an interview with The New York Times. "I’m very aware of the hate that exists online, but I have to protect my own mental health and my own artistry. And that’s way more important to me because I’m a real human being," they said. Like their character Che, Ramirez is non-binary and uses they/them pronouns. "We have built a character who is a human being, who is imperfect, who's complex, who is not here to be liked, who's not here for anybody's approval. They're here to be themselves," they said, adding that they’re not taking any negative comments too personally. "I don't recognise myself in Che,” they said.

"I welcome the passion that folks are bringing to the table around this representation,” Ramirez added. “But in real life, there are a lot of different human beings who show up to the table, speaking truth to power in myriad ways. And they all land differently with different people. Che Diaz has their own audience that they speak to who really get a kick out of what they’re doing."

More like this
Adam Ali Hopes 'Waterloo Road' Will “Subvert” Queer Misconceptions
By Sam Ramsden
Adam Lambert Called Out The George Michael Biopic Over Potential Casting
By Sam Ramsden
'The Last Of Us' Has Revived The Inspirational "Hopepunk" Trend
By Sophie McEvoy
Harry Styles Just Split His Pants In Jennifer Aniston’s Face
By Sam Ramsden
Get The Very Best Of Bustle/UK
Sign up for Bustle UK's twice-weekly newsletter, featuring the latest must-watch TV, moving personal stories, and expert advice on the hottest viral buys.