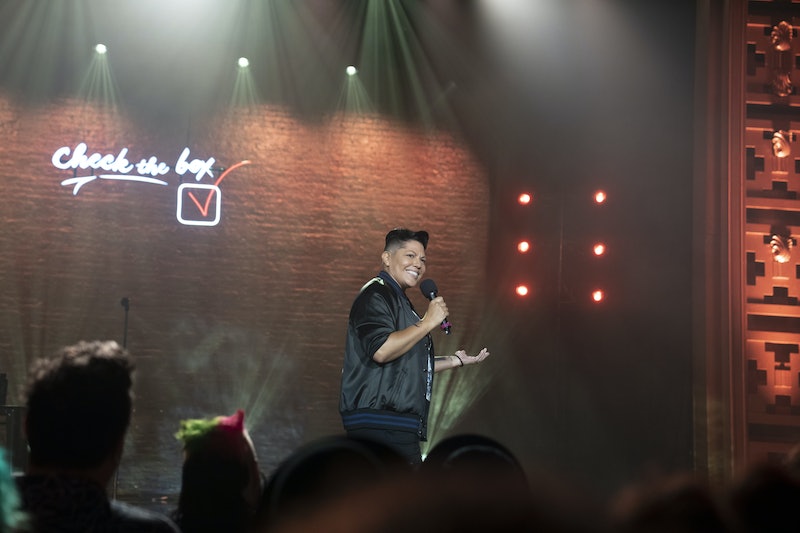 Hey, it’s Che Diaz! If those words alone send a chill down your spine, you may be entitled to financial compensation. (Or, at least, a good meme or two for your troubles.) Played by Sara Ramirez on And Just Like That..., Carrie Bradshaw’s podcast boss has a few bad habits, like smoking weed in the worst possible places and having kitchen sex at their convalescent employee’s apartment. To which, by the way, they weren’t even invited.

But for all their faults, Che is a paradoxically bright spot of the Sex and the City reboot. They might be entirely too bold — as Ramirez told Bustle in December, “This person's way more confident than I am” — but their character also has a sort of unifying effect. Even when the show gets fairly glum and tense (as is bound to happen in any reboot that starts with a key character’s heart attack), viewers can take solace in memes that are enthralled with and terrified by Che’s inadvertent jump scares and catchphrase of a greeting.

If you ever want to lighten the mood with something even funnier than Che’s comedy “concert,” these memes and tweets should have you covered.

Naturally, many Che Diaz tweets revolved around their signature greeting — and the visceral fear of them showing up unannounced, which writer Carey O’Donnell spoofed in one hilarious video.

Warmest congratulations to Miranda for having the best sex of her life! Now, if only it weren’t so ill-timed (and ill-placed). While several users poked fun at the awkward hookup situation in Episode 5, writer Sophie Ross predicted Che could be moving onto another New Yorker very soon.

Hey, Che still has plenty of fans out there, including Selling Sunset’s Chrishell Stause, who found the podcaster “funny and charming” before looking into the discourse (rookie mistake). Others simply acknowledged that, yeah, Che Diaz makes Twitter better.

Until that Che Diaz spinoff is announced (one can dream!), here’s to many more meme-worthy moments in the remainder of And Just Like That...

More like this
Everything To Know About 'And Just Like That...' Season 2
By Jack Irvin and Grace Wehniainen
Here’s What Happens To Bill & Frank In 'The Last Of Us' Video Game
By Brad Witter
Twitter Is Burning As Phoebe Dynevor Reveals Daphne’s 'Bridgerton' Exit
By Sophie McEvoy
The 'Gossip Girl' Reboot Creator Is “Looking For A New Home” To Air A Potential Season 3
By Brad Witter
Get Even More From Bustle — Sign Up For The Newsletter
From hair trends to relationship advice, our daily newsletter has everything you need to sound like a person who’s on TikTok, even if you aren’t.