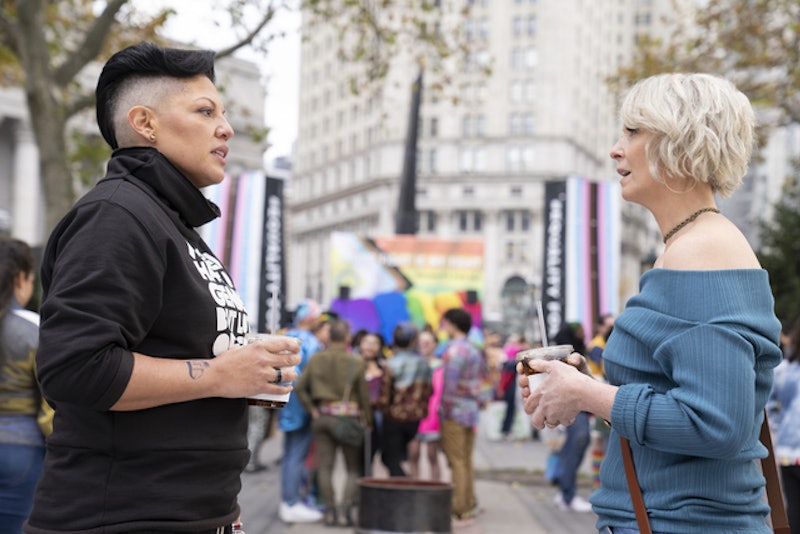 It’s a stretch that Miranda Hobbes (Cynthia Nixon) would ever utter the words, “I’m in a rom-com.” It’s a straight-up offense to her character that she says it earnestly, as she rushes to the airport to catch a flight to Cleveland to tell her comedian lover Che Diaz (Sara Ramirez) that she’s getting a divorce so they can be together. This is a woman who famously screamed, “You’re living in a fantasy” at Carrie after she announced she was moving to Paris with Alexander Petrovsky!! Who is this Miranda? Someone please come claim her.

Throughout the entirety of HBO Max’s And Just Like That, we’ve watched our formerly level-headed career woman giggle and trip over her words like a nervous schoolgirl. Sometimes, her crush on Che feels sweet – a rare moment of excitement and fun in a show that is otherwise quite cynical about love in your 50s. Other times, it feels disastrous. In Episode 9, it feels like a car crash happening in slow motion.

To Che’s credit, they have been upfront about not wanting a traditional relationship. They were clear with Miranda that they were not interested in being a side piece while she was still married and lying to her husband, which is what prompted Miranda to end her marriage to Steve (David Eigenberg). However, despite Che’s best efforts to communicate their boundaries and expectations, it all seems to go in one ear and out the other for Miranda. Che says “nothing traditional,” Miranda goes ahead and calls herself their girlfriend. Che says “DM me,” Miranda sends one DM and then spirals about being rejected. Che says “give me a heads up before you show up to my apartment” and Miranda all but throws herself down the stairs in shame and embarrassment, yelling about how she would never do this with a guy she had been seeing. Che once again has to point out the fact that 1) They are not a guy and 2) This is not a relationship defined by binaries and age-old gender roles.

Part of Miranda’s behavior feels completely in line with the euphoria – and confusion – that can come with discovering your queer identity, especially later in life. She’s suddenly learning a new set of rules and behaving in ways she previously couldn’t have conceived of (the cursed kitchen-fingering scene). But as some critics have pointed out, it feels a bit like Invasion of the Body Snatchers.

“She’s very alone in her journey of self-discovery,” Megan Holland, a fourth grade teacher who’s in a queer relationship after ending her marriage to a man, told NBC News. “Miranda would be listening to a podcast; she would find a really good queer therapist; she would read open-relationship and poly[amorous] books and address that with Steve. Maybe they would do poly for a while. She would figure it out that way.”

Over the course of the original Sex and the City series, Miranda was the most practical and self-assured. While the rest of the group floundered through bad relationships and ignored red flags, she knew what she wanted and went for it. She had an extremely low tolerance for bullsh*t and game playing, always read her dates to filth when they disrespected her, and knew when to walk away when it was clear a relationship wasn’t going to work. But with Che, the Miranda we knew seems to be gone entirely, replaced by a nervous woman playing childish games like a teen.

At the end of Episode 9, Miranda recounts to Carrie (Sarah Jessica Parker) how embarrassing it was for her to drop by Che’s house with cookies and get brushed off. In the middle of their talk, Che calls. Miranda ignores the call. “I’ve been too available lately,” she explains. Honesty and transparency are apparently no longer a priority for Miranda, who is somehow the same person who once bluntly told off a sandwich. Something tells me this won’t go over well with Che…

More like this
Twitter’s Reaction To HBO’s ‘Game Of Thrones’ Jon Snow Spinoff Idea Is Chaotic
By Stephanie Topacio Long
Everything To Know About True Detective Season 4
By Brad Witter
'Succession' Season 4 Could Be The Show’s Last
By Kadin Burnett and Gabrielle Bondi
Why Simone Ashley Had To Study Snails For Intimacy Training, Pre-‘Bridgerton’
By Grace Wehniainen
Get Even More From Bustle — Sign Up For The Newsletter