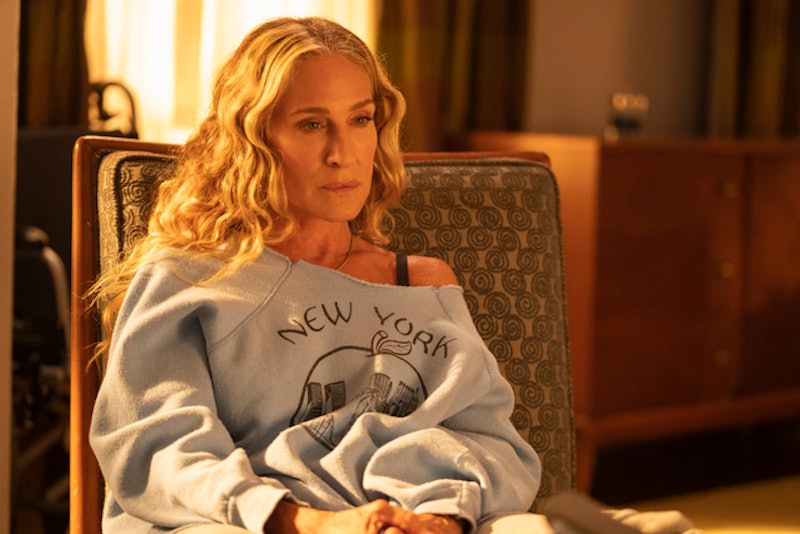 Spoilers ahead for Episode 7 of the Sex and the City reboot, And Just Like That.

Bad dates make for great stories. Bad marriages? Not so much. Whereas the original Sex and the City followed Carrie (Sarah Jessica Parker), Miranda (Cynthia Nixon), Samantha (Kim Cattrall), and Charlotte (Kristin Davis) as they navigated their way through strange hookups, underwhelming dates, and tumultuous relationships without ever losing their sense of humor, HBO Max’s And Just Like That reboot finds them in much sadder territory. Carrie is still reeling from Big’s sudden death, Charlotte and Harry (Evan Handler) are bickering, and Miranda has all but exited her marriage to Steve (David Eigenberg) entirely.

These issues come to a head in Episode 7. After Che (Sara Ramirez) declines to respond to her DM, Miranda attempts to have a moment of intimacy with Steve, with whom she has apparently not had sex in years. The results are tragic: Neither of them are into it, and they abandon the idea after only a few minutes, only solidifying for Miranda that her marriage is beyond the point of salvaging.

Meanwhile, Charlotte and Harry – arguably the strongest couple still on the show – get into an argument while playing tennis with Charlotte’s new BFF Lisa Todd Wexley (Nicole Ari Parker) and her husband. Harry essentially invites himself to the match, then tries to make Charlotte feel bad about being “too intense” and knocking him down on the court. When she refuses to apologize, Harry gawks. But what he’s so obviously not getting is that the tennis debacle is not about tennis at all: Charlotte’s refusal is clearly coming from a much deeper place of always feeling like she’s apologizing and compromising as a woman.

Though the original show wasn’t completely devoid of real, substantive relationship conflict, it was often played for laughs; even when Carrie was in the pit of despair from Big leaving her at the altar, the first SATC movie made time for Charlotte to sh*t her pants. It also usually resulted in the women simply casting aside the men causing them problems and moving on to the next person; there was little tolerance for relationship hiccups, like the man Miranda dated who compulsively showered after sex or the one whose dick was too big for even Samantha. Now, they’ve had children and built whole lives with people. And as a result, we’re witnessing a new kind of relationship strife altogether – the kind that only arises after years of prolonged tension, frustration, and lack of communication. It’s realistic, to be sure, but reality is not something SATC much concerned itself with, and it was better for it.

There’s a glimmer of the old spirit of the series when, at the suggestion of her publisher, Carrie goes on her first date since Big’s death. It goes disastrously, ending with both her and the guy drunk-puking on the sidewalk. But while it’s admittedly funny, it’s also an incredibly discouraging start to Carrie’s first dip back into the dating pool. Frankly, And Just Like That is making love after 50 look pretty bleak. Is anyone having fun?