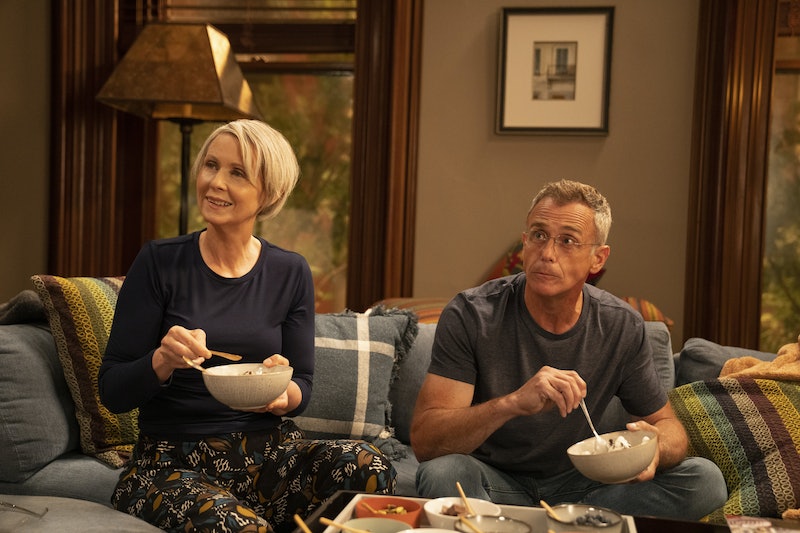 Like most other characters in the Sex & The City reboot And Just Like That, Steve isn’t having a great time. Carrie is still (understandably) devastated by the loss of Big, Charlotte and Harry can’t stop bickering, and Miranda... well. Her blossoming romance with Che (Sara Ramirez) has drawn fervent criticism from Steve stans in particular. But AJLT writers Julie Rottenberg and Elisa Zuritsky have come out in defence of his storyline.

Fans have flocked to Reddit share their intense displeasure at Steve’s treatment. “After all that Miranda and Steve have gone through, all the years they’ve been married, she couldn’t just, I don’t know, communicate with her husband,” mused one user. The conversation spurred The Cut to speak out in defence of David Eigenberg’s beloved character in a piece aptly titled “Steve Deserves Better.”

In episode seven, “Sex and the Widow,” Steve’s few scenes are perhaps the saddest yet in the saga’s long history. First he loses his wallet at the farmers market (as you do) much to the chagrin of Miranda, and then he quite literally fumbles his wife’s rare sexual advances. “I’m afraid the patient is non-responsive,” Miranda tells Carrie when describing the scene in a not so subtle reference to the end of her marriage.

It isn’t that the show producers hate Steve, Rottenberg and Zuritsky said in an interview with Vanity Fair. “Everyone on the show, every single person, loves David Eigenberg as a human being,” explained Zuritsky.

“We love him as an actor. We love Steve. We are really invested in the Steve-ness of him. He’s so full of life, and the Steves out there are good guys.” Zuritsky points out that criticism of Steve’s storyline is, perhaps, rooted in some “lopsided gender issue…you feel angry at her and more protective of him.”

Rottenberg is quick to add that Miranda’s storyline isn’t about hating her husband. “Miranda’s journey is representing another reality out there, which a lot of people go through—the reevaluations and transitions in life. Grown couples grow apart, and people come to epiphanies about what their spouse is or isn’t fulfilling for them. Miranda’s story was very representative of a certain path that a lot of women find themselves on.”

“We didn’t set out to make virtuous characters necessarily,” continues Zuritsky. “Even beloved people have crises. Even moral, generally wonderful people make choices that aren’t necessarily admirable or virtuous. But they do them anyway because they’re going through something, or they’re working through a crisis.”

The criticism isn’t exactly a surprise, though. During filming the assistant-directing department went to the extreme of making “Team Steve” and “Team Miranda” pins for the whole crew. The writers refused to comment on which was the more popular button, though it isn’t hard to guess... True to character, Eigenberg took a ‘Team Miranda’ pin. Classic Steve.