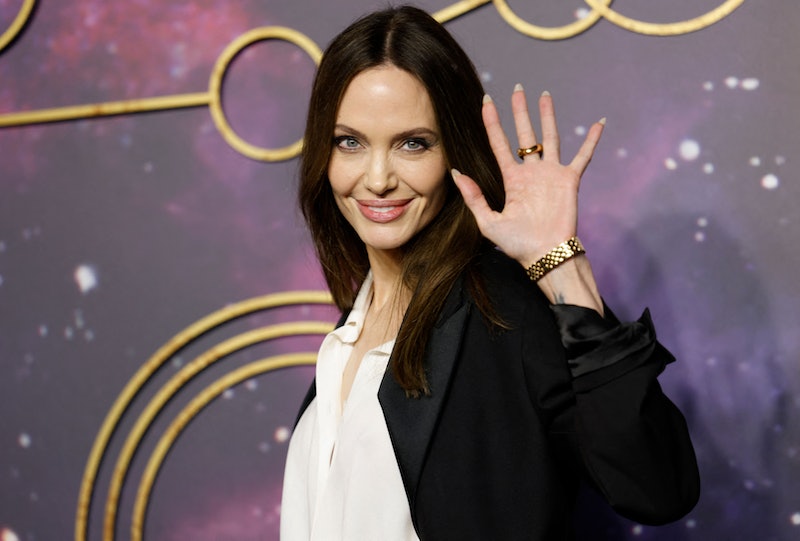 For at least two decades, Academy Award winner Angelina Jolie has been regarded as one of the most talented and highest-paid actors in the world. The Eternals star, who won her Oscar for Girl, Interrupted in 2000, has an unparalleled ability to deliver a performance that people can’t turn away from. The 46-year-old entertainer has made millions and won countless awards — all while dealing with the downsides of the entertainment industry, including serious invasions into her privacy and multiple high-profile divorces.

Jolie has been making more money than many companies, but what does it all add up to? The powerhouse earns most of her money from acting, and she definitely earned a hefty paycheck for her latest film, Marvel’s Eternals, in which she stars as Thena alongside Salma Hayek, Kit Harington, and more.

What Is Angelina Jolie’s Net Worth?

Not many actors claim a net worth that includes nine digits, but Jolie is far and away one of the richest in the business. At the moment, Celebrity Net Worth pegs her net worth at $120 million, and that sum could easily rise as she continues to say yes to more films. Forbes ranked the superstar as the second-highest-paid actor in the world in 2020, as she pulled in $35 million, though it wasn’t even the busiest time of her career.

While she doesn’t use her proper surname professionally, Jolie is a part of an acting dynasty. Her father is Oscar winner Jon Voight, and her mother, Marcheline Bertrand, was also an actor for a short period of time before becoming a producer. Jolie largely chose not to rely on her famous last name, and so it took her a little while to find real commercial success in the movie and TV world. She had to work for years in low-budget projects like Cyborg 2 and music videos before scoring a win in 1995’s Hackers. She quickly began racking up credits, and she even earned several Emmy nominations and two Golden Globes for her work in TV films George Wallace and Gia.

Jolie’s career really took off after she starred in the 2000 dark drama Girl, Interrupted, for which she won the Academy Award for Best Supporting Actress. Unsurprisingly, that proved to be a springboard for her, even if the movie wasn’t the largest commercial smash. By then, she was recognizable and she had demonstrated that she could act like the best in the business. Pairing talent with beauty, she was an unstoppable force.

The real money started to pour in when Jolie’s tenure as an action star began. Shortly after winning her Oscar, she headlined films like Gone in 60 Seconds, both Tomb Raider movies, and Mr. & Mrs. Smith. For these projects, which were all financial successes, Jolie pulled in paychecks that included eight digits, and she first began appearing on lists of the highest-paid figures in Hollywood.

Soon, Jolie began to spread her wings and investigate other areas of the moviemaking business, all while finding time to continue to act in blockbusters like Wanted, Salt, The Tourist, Kung Fu Panda, and others. She began to write, produce, and direct projects that were near and dear to her heart, such as In the Land of Blood and Honey, A Place in Time, By the Sea, and First They Killed My Father. She also earned a second Academy Award nomination for her work in Changeling, though she didn’t take home another trophy. Jolie worked harder on some of her own efforts, but none of them were huge moneymakers, so she surely didn’t collect her normal astronomical fee.

By the end of the 2000s decade, Jolie was sometimes commanding $15 million to $20 million per film, and she ranked as the highest-paid actress in the world several times. For example, she earned $15 million for the action flick Wanted. Salt performed so well that she was expected to pull in $20 million for the sequel, though that hasn’t been made thus far. For Maleficent, Jolie not only starred as the titular character, she was also credited as a producer, and including her back end on the project, she ended up netting a massive $33 million, per Time. The second film in the series may have brought her as much as $28 million.

Her latest release, Eternals, is an ensemble movie as there are a number of major stars in the picture, but that doesn’t mean she’s not making bank from appearing in what is potentially the first in a new franchise. Jolie is surely commanding millions (Forbes suggests it’s at least $10 million) for the film, which may very well become a box office smash, as so many others like it have before. The superstar is likely to again be a big draw to theaters, which is the main reason why she earns so much money for everything she signs on to do.

As if pulling in millions for acting in a movie wasn’t enough for Jolie to keep the lights on at home, she has worked with a handful of high-end brands in the past, and she always collects a massive paycheck for doing so. She got her start in the mid-aughts by partnering with fashion label St. John and then Japanese cosmetics and skin care company Shiseido. She also posed for ads for another name in the same field, Guerlain, and helped sales skyrocket.

In 2011, she signed a deal to endorse Louis Vuitton, and she made history at the time. The actress was reportedly paid a whopping $10 million for an ad campaign, which was a record in the fashion world; it’s still an eye-popping sum for anyone to earn for similar work.

In 2008, Jolie and Brad Pitt purchased the Château Miraval, a massive estate and winery in France. The pair reportedly paid $67 million for the property, and they were married there a few years later. The land wasn’t bought simply for aesthetic purposes — the two planned on making money from the famed location, and that’s just what they’ve managed to do. The winery is back in business, with the brand doling out rosé to fans all around the world. Recently, it was announced that a champagne will be coming as well.

In 2020, an estimated 150,000 cases of Château Miraval were shipped to the United States, per Wine Spectator, and it keeps selling and racking up awards from wine enthusiasts. The estate is now reportedly worth $100 million more than when the two actors bought it, and while it was likely earning them both some good money, Jolie wanted out. In October 2021, she sold her 50% stake in the venture to the wine division of Stoli, People reported, though what she made was not disclosed. It’s safe to assume it was many millions, but Pitt may make even more, since he’s still involved in the business.

4. Pictures Of Her Children

Jolie and her former husband Pitt commanded more for pictures of their babies than most people could ever hope to make in a lifetime. The demand for the exclusive snaps of their children hit feverish highs when Jolie was pregnant (both times), and they were able to bring in tens of millions for the snaps, though they decided to give all that cash away.

After Jolie gave birth to her first child (after adopting several) in 2006, she and Pitt sold the rights to the publication of the first images of baby Shiloh to Hello! magazine in the United Kingdom and People in the United States, earning $4.1 million and $3.5 million, respectively. So, all told, the family earned $7.6 million for those images. When Jolie became pregnant again, the price went up. The actress was carrying twins, which made things even more exciting for the masses. The same publications bought the rights to images of siblings Knox and Vivienne for an astounding $14 million in 2008.

After more than a decade as Hollywood’s biggest “it” couple, Jolie and Pitt separated, with the former filing for divorce in 2016. It would take three years for them to be officially declared single again, but the legal battle is still ongoing, costing them both an incredible amount of money. The untangling of their financial affairs has proved to be difficult and complicated, and it is stretching on and on. According to reports, both actors have already spent $1 million on the divorce, and it’s not done yet.

While their lawyers collect thousands of dollars per week, there are some positive financial aspects, at least for Jolie. In addition to making what must have been a pretty penny for the sale of her stake in the wine business she co-owned with Pitt, the Oscar winner also reportedly sold a painting given to her by her former husband. Painted by Winston Churchill, the image may have gone for as much as $11.5 million at auction, per The New York Times.