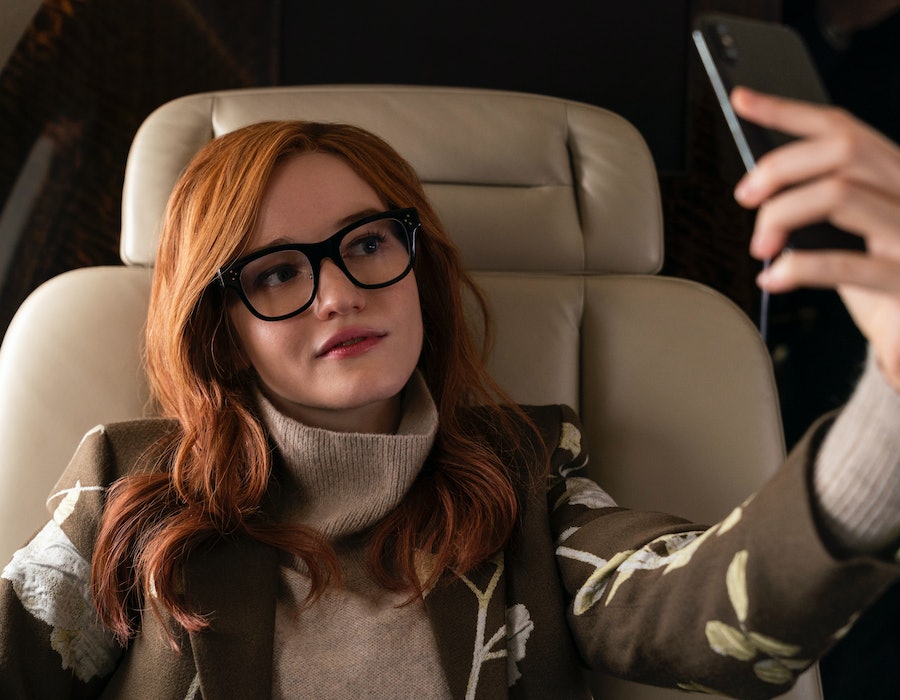 Netflix’s new miniseries Inventing Anna begins with the reporter Vivian Kent, a lightly fictionalized version of the journalist Jessica Pressler who works at a lightly fictionalized version of New York Magazine, chasing down leads about a young woman posing as a rich heiress and using the name Anna Delvey. Kent tracks down the fake heiress’s moneyed connections by using a trail of social media bread crumbs. “I found you on Instagram,” Kent says to one source on the phone, beginning a montage where she says it over and over again: “Instagram. Instagram. Instagram. Instagram.”

As viewers, we're supposed to believe that social media was crucial to the way that Delvey created her legend and duped the trust fund babies, life coaches, gallerists, and investment bankers of downtown Manhattan. Perhaps, to an extent, it was. After Pressler broke her bombshell story for New York in 2018, plenty of people pored over Delvey’s social media looking for clues as to how this 26-year-old, born Anna Sorokin to a middle-class Russian-German family, could have posed as a privileged socialite so successfully that she managed to swindle over $250,000 from major financial institutions in what was essentially a massive check-kiting and Ponzi scheme.

Delvey has lived several lifetimes since then: 19 months at Rikers Island jail, three years in Albion Correctional Facilities, six weeks running amok both through Twitter and the streets of New York, and time in ICE detention for overstaying her visa — where she is now, fighting deportation to Germany. Today she leverages social media to lean into the myths created about her.

On ABC’s 20/20 special about Delvey last September, they called her “the sinfluencer of Soho,” but she was hardly an influencer by today’s standards. Before her arrest, her Instagram feed seems like it could have belonged to any New York party girl with arty ambitions, as it featured mostly selfies and pics of nights out, palm trees, installations at the Whitney, and sunsets over the New York skyline. Its purpose came in who it drew in, rather than what. Delvey’s former friend Rachel Deloache Williams, whose memoir about their friendship is being adapted for HBO by Lena Dunham, says that Delvey’s 40,000 Instagram followers gave her an air of legitimacy when they first met. According to Kate Eichhorn, a professor of media and culture at The New School, 40,000 wasn’t an astronomical follower count in 2016. “That’s a fairly small following,” says Eichhorn, who studies how identity is constructed on social media. “She was very much curating who she was reaching out to.”

Delvey kept her accounts live during her 2019 trial, for which she hired a Hollywood stylist to assist in curating a courtroom image, like black-and-white designer minidresses, with occasional plunging necklines. (She was convicted on eight counts.) And when she was released from prison roughly four years later, in February 2021, she immediately logged into her social media accounts. This was when her Instagram display name became “Anna Delvey2.0,” marking her public reinvention as she embraced a new role: as tabloid favorite, master criminal, and mistress of chaos. Delvey was intentional about furthering this caricature, and social media provided the medium.

This was arguably Delvey’s freest and most entertaining era. Instead of her sober shots of art pieces at the Whitney, she taunted gossip columnists, sold a “Delvey Mail” shirt parodying the Daily Mail logo, and posted defiant jokes about her time at Rikers. Her tweets sound like she was workshopping different catchphrases: “Going to trial is the new sex tape,” read one. And another: “Used to be such a nice girl before they put me in prison.”

“This opulence is often more evidence of debt than it is wealth, but flexing is a way to get more attention and create more content. An unsustainable lifestyle is a business expense.”

Eichhorn notes that Delvey’s use of social media in some ways has less in common with contemporary influencers than performance art, comparing her prodigious posting to a kind of “durational performance.” (In one anvil-obvious scene, Inventing Anna juxtaposes Delvey with the artist Cindy Sherman, who is famous for her chameleonic self-portraits, each of which looks so different that it obscures Sherman’s real identity.) In a way, of course, social media has always been a kind of performance art, at least for some people. It works as a kind of mass stress test for the idea of identity as performance, a postmodern arena where our images take on lives of their own.

Particularly as Delvey’s case gets renewed attention from the Netflix series, she seems to be trying to pivot once again. In a recent interview with The New York Times, she says her goal since the arrest has been to poke holes in the legitimacy of the prison system. “I always saw my social media as satire…” she says. “Part of me throwing my story around and using my voice is to put more public awareness on the nonsensical things inmates have to go through every day.” The satire excuse is one that many who say inflammatory things on social media — and want to avoid legal consequences — turn to, but it is difficult not to revel a little bit in the defiance she showed, going so far as to tweet “Good job @ManhattanDA” when she was convicted. “I don’t think this is such a controversial or radical thought,” she told the Times, “that prison is really a waste of time and it’s not efficient.” I think it’s fair to say, though, that her primary concerns are not systemic. Recently, she posted on her Instagram story that she was seeking a new lawyer to get her released and fight her deportation. She’s determined to stay in New York.

That’s the strange thing, especially in anticipation of Inventing Anna: Delvey had somehow started posting on Instagram again. ICE inmates are not allowed the use of mobile phones, leading to speculation that Delvey is directing a friend to post from the outside. She reposts many articles about the show, and even shared a picture of Julia Garner depicting her on Netflix with the caption “Inventing me.” Scrolling through her Instagram, you can feel her relief: that she is still able to construct her persona on the internet again. Eichhorn admitted she hated to say it but pointed out that Delvey is a case study in manifesting one’s own reality. “Scripting something over and over again until you believe it and other people believe it,” Eichhorn says, “that’s part of what Anna did really well.”

Delvey told 20/20 last fall that she wasn’t delusional — she knew she didn’t have money, and she was trying to change that. The scheme she ran was her version of faking it until you make it. On social media, there’s a word for this: flexing. Influencers will show off their conspicuous consumption in YouTube videos and Instagram posts, flaunting their lavish mansions, closets bursting with Gucci, wrists dripping with Cartier, and Bugattis in the driveway. This opulence is often more evidence of debt than it is wealth, but flexing is a way to get more attention and create more content. An unsustainable lifestyle is a business expense.

This is something Delvey could have told you five years ago. As she told Pressler, “Resilience is hard to come by, but not capital.” She claims to be working on an NFT project of her prison drawings, and in a way, it’s too bad that NFTs and cryptocurrency weren’t so buzzy in 2017. In these new speculative markets (one could include the influencer bubble in that list), the line between hustler and scammer has never been thinner. When she’s released, I have no doubt Delvey really will become rich, entering into an economy that’s finally ready for her — for her to be the person who comes down to the lobby in the hotel where she lives, slovenly but expensively dressed in a Supreme hoodie and designer leggings, dropping a $100 tip on the concierge desk. Maybe she will live an upstanding life, as she says she plans to. Maybe she will go full influencer, and start promoting crypto scams and laxative teas. Either way, she has cut out the middle man, beaming herself directly to us at the touch of an iPhone — filters on.

More like this
Angourie Rice Unleashes Her Inner Control Freak
By Jessica Derschowitz
The Beyhive Is Buzzing About Beyoncé’s 'Renaissance' Album
By Sam Ramsden
In Rap Sh!t, Social Media Has Main Character Energy
By Aramide Tinubu
On TikTok, Users Are Pranking Their Loved Ones With Minions Makeup
By Emma Carey
Get Even More From Bustle — Sign Up For The Newsletter