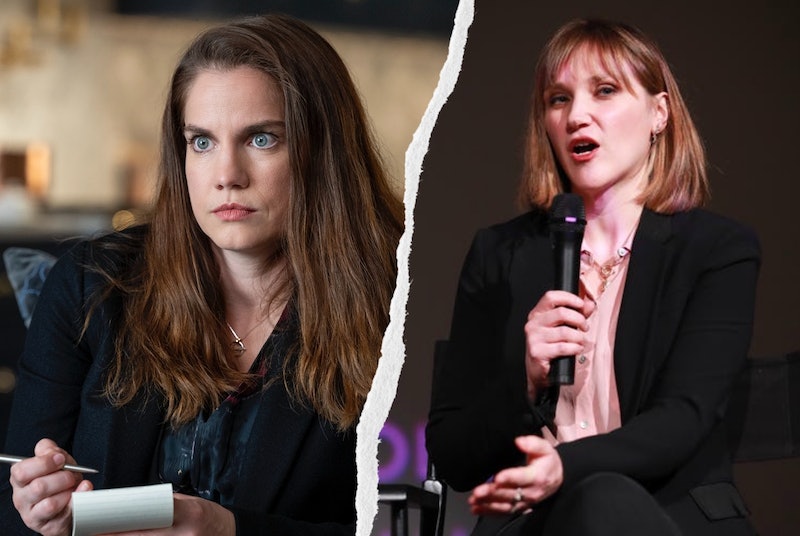 Netflix’s Inventing Anna tells the story of convicted fraudster Anna Sorokin, a Russian-born German woman (played by Julia Garner) who conned banks, hotels, and her own friends out of hundreds of thousands of dollars while posing as a German heiress named Anna Delvey. Inspired by a New York Magazine article titled “How Anna Delvey Tricked New York’s Party People,” the Shondaland-produced miniseries follows Sorokin’s crimes through the eyes of a journalist named Vivian, played by Anna Chlumsky. The character is based on real-life journalist Jessica Pressler, the writer behind the story, who recently spoke to Vulture about her thoughts on becoming a central figure in Inventing Anna.

The series portrays Vivian as a longtime New York staffer recovering from a “Reasons to Love New York” story she wrote featuring a successful Manhattan-based teenage stock-trading millionaire — who turned out to have made the whole thing up and made her look like a bad journalist. Due to her tarnished reputation, Vivian’s seen fighting with her editors for the go-ahead to report on Sorokin’s crimes, as they’d rather have her writing about #MeToo stories on Wall Street. With help from her peers in “Scriberia,” a section of the office where tenured employees are often sanctioned, Vivian successfully reports the story — all during the late stages of pregnancy, which complicates the job.

Pressler told Vulture she was contacted by Shonda Rhimes about Inventing Anna early in its production process and provided insight on her time reporting the story, from the complex process of visiting Sorokin in prison at Rikers Island to mere “funny things that happened.” Then, she learned Rhimes wanted to make Vivian a character in the story. “It was not a thing I wanted, but I understand the impulse of why they wanted to do it,” said Pressler. “Anna is this unknowable person and she was in jail, and it’s a world people aren’t familiar with. You wanted a tour guide into this world.”

The journalist said she had no involvement in Chlumsky’s casting and didn’t expect the character to be so heavily featured throughout the series. Another of Pressler’s articles, “The Hustlers At Scores,” was previously adapted into 2018’s blockbuster film Hustlers, which featured Julia Stiles as the New York writer. But Pressler claimed Stiles’ role was reduced from the film’s initial scripts, she explained, “so I assumed they would cut the reporter character in Inventing Anna.”

She also wasn’t aware the “Reasons to Love New York” controversy — which actually happened — would be explored, as it wasn’t mentioned to her beforehand. “It was just something they found since it was easily Googleable. The weird thing is that had happened before with Hustlers, and that story was a part of that character before it got cut out,” she told the publication. “I get that there’s this parallel in that you’re writing about a con artist and then appear to have been conned.”

Pressler was actually “super pregnant” while reporting the story, though she said it didn’t add as much drama to the job as it seems onscreen. “It was not a thing where there was a towel on the floor of the office,” she clarified. “I think Shonda liked the idea of a woman being pregnant, and it was an interesting thing to show that you can live your life while being pregnant.”

Furthermore, while her bosses did push back on her pitch to write a story about Sorokin, Pressler told Vulture she didn’t have to fight as hard as Vivian. “They did want me to write a Wall Street Me Too story, and I did react in pretty much exactly that way — though not as articulately,” she said. “I did have to sell the story, but it was definitely not exactly the way it was on the show. She has to pitch it in person because you can’t just have people being on Slack and email on TV.”

She also never put up a “murder wall” in her nursery like Vivian, but many other aspects of Inventing Anna are true, according to Pressler. “Scriberia” is a real place, and she actually lent clothes to Sorokin for her trial, traveled to Germany hoping to find the grifter’s parents, and developed a friendship with Sorokin’s lawyer, Todd Spodek. But they didn’t exactly play out in real life the same way they do on Netflix. “It’s so much more dramatic because it’s a TV show,” she detailed. “But the arc of the feelings that I had reporting the story, the feelings I had about journalism being complicated and whether this is an exploitative job — that is stuff I was thinking about.”

More like this
Every 'That '70s Show' Character Who Returned For The Netflix Spinoff
By Grace Wehniainen
'The Crown' Season 6 Has Suspended Filming "Out Of Respect" For The Queen's Death
By Bustle Staff
Ozzie’s Coming Out Scene With Kitty On 'That ’90s Show' Has Twitter Sobbing
By Brad Witter
Here’s Everything Coming To & Leaving Netflix In February
By Jake Viswanath
Get Even More From Bustle — Sign Up For The Newsletter
From hair trends to relationship advice, our daily newsletter has everything you need to sound like a person who’s on TikTok, even if you aren’t.