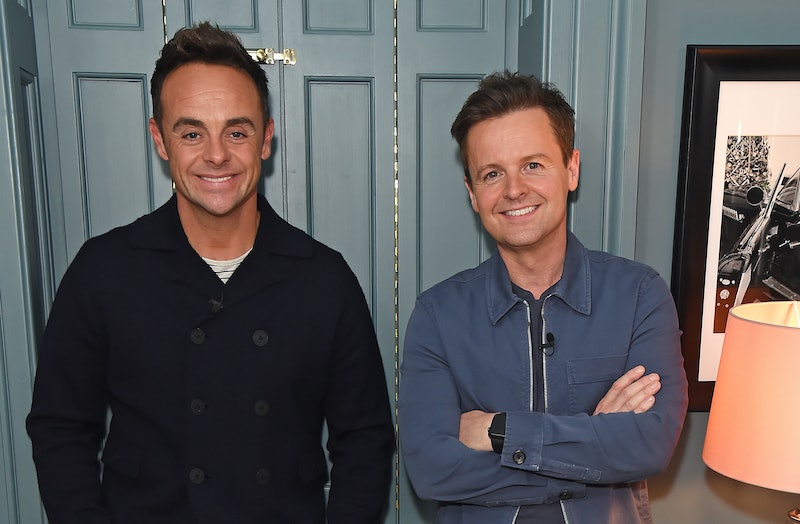 It's been nearly eight months since the coronavirus crisis sent us all indoors and, as we begin to adjust to the "new normal," TV production companies are finding ways to ensure our favourite shows remain on screen. Extra PPE, different schedules, and, for some shows, entirely new locations have been introduced. Take, for example, ITV's I'm A Celebrity Get Me Out Of Here, which has moved from the blazing heat of the Australian jungle to the wintery chill of North Wales. And this photo of Ant & Dec on location for the new series is sure to warm the hearts of die-hard fans.

As mentioned, this time round, instead of Australia, the show will be broadcast from Wales. I know what you're thinking: what a contrast. But if the picture on Ant & Dec's Twitter is anything to go by, that landscape is looking pretty ruthless.

The pair are decked out in their finest explorer garb and standing in front of a sign pointing towards Gwrych Castle, which is where the latest season of the show is to be filmed. Situated in Abergele in North Wales, the historic location is set on 250 acres of grounds overlooking the Irish sea.

For many fans, the question is, how is it all going to work?

Acknowledging the big differences this year, Richard Cowles, Director of Entertainment at ITV Studios says, "The Australian jungle is such an integral part of the show. It was a big challenge to find a UK location where we could continue to deliver what viewers love about I'm A Celebrity...Get Me Out of Here!"

One thing is for certain: although there won't be quite as many creepy crawlies or scary animals to contend with (maybe a few goats), the Welsh weather is going to be challenging for the contestants this season. The BBC is reporting highs of 13 degrees today (Oct. 1) and the show usually doesn't kick off until late Nov.

"While there will be plenty of changes required," says Cowles, "as we move from New South Wales in Australia to North Wales in the UK, we are really excited to see how we can adapt the format and make the Castle our new home for a very special 20th series of I'm a Celebrity...Get Me Out of Here! this Autumn."

Let's hope, for the sake of the celebs, one of those adaptions is it being filmed indoors.