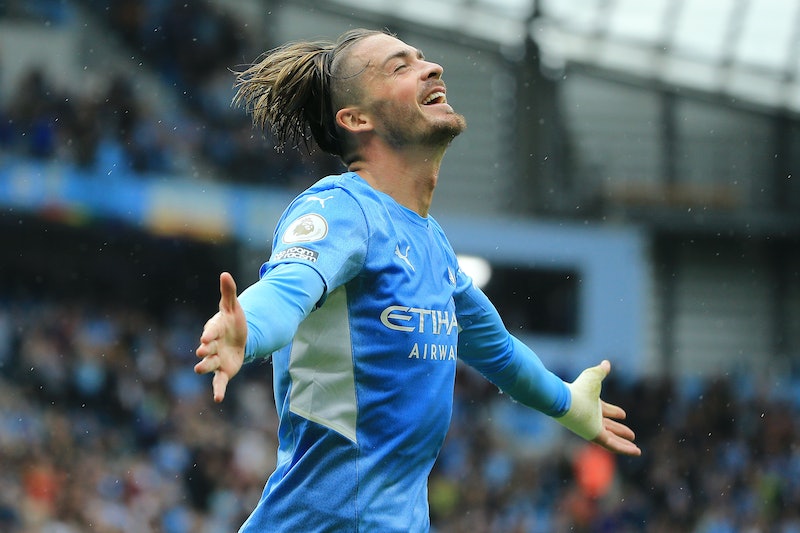 After scoring his first goal for Manchester City during a 5-0 match against Norwich at the weekend, footballer Jack Grealish was spotted on a night out with Love Island’s Ellie Brown. Of course, this has led to speculation – on social media, in the press and in the Bustle team meetings – about whether the two may be dating, especially since it was discovered on Aug. 15 that Grealish has a profile on Raya, a dating app favoured by celebs. So, are Grealish and Brown actually coupled up?

According to onlookers, the pair “seemed really into each other” after meeting at Manchester’s Peter Street Kitchen before moving on to nightclub Chinawhite. “Drinks were flowing and they were flirting like mad,” one source told The Sun. “At one point they nipped outside for a quiet chat with some friends.”

But, according to a source close to Brown, there’s nothing going on between them. “She merely bumped into him outside an event,” they told The Sun. “They have mutual friends.” And as for Grealish’s profile on Raya, a spokesperson for the former Aston Villa team member said they “don’t comment on these matters, whether they are correct or incorrect.”

It’s unclear whether Grealish is still dating Sasha Attwood, although the pair were spotted on holiday in Croatia last month, spending time in Dubrovnik on the south coast. On Aug. 10, Attwood was seen cheering her beau during his official unveiling for Manchester City at the Etihad Stadium.

In response to the thousands of hateful comments she received during the Euros, Attwood briefly spoke about her relationship with Grealish, and explained why they like to keep things private. “I don’t post my relationship over social media like a lot of people don’t want to,” she explained in a video posted to her YouTube channel. “There’s nothing wrong with that. That’s a very big part of my life, but it’s not something that I want to splash all over social media.”

Attwood concluded, “It’s just something private […] you don’t have to post to prove anything.”

More like this
What Exactly Is The Bish & Chips Show?
By Frances Stewart
Molly-Mae Hague & Tommy Fury Celebrate Pregnancy Reveal In The Sweetest Way
By Sophie McEvoy and Sam Ramsden
How To Get Tickets To 'Strictly Come Dancing's Live Tour
By Sophie McEvoy
'Made In Chelsea's Liv & Tristan Are Hard To Keep Up With
By Sophie McEvoy
Get The Very Best Of Bustle/UK