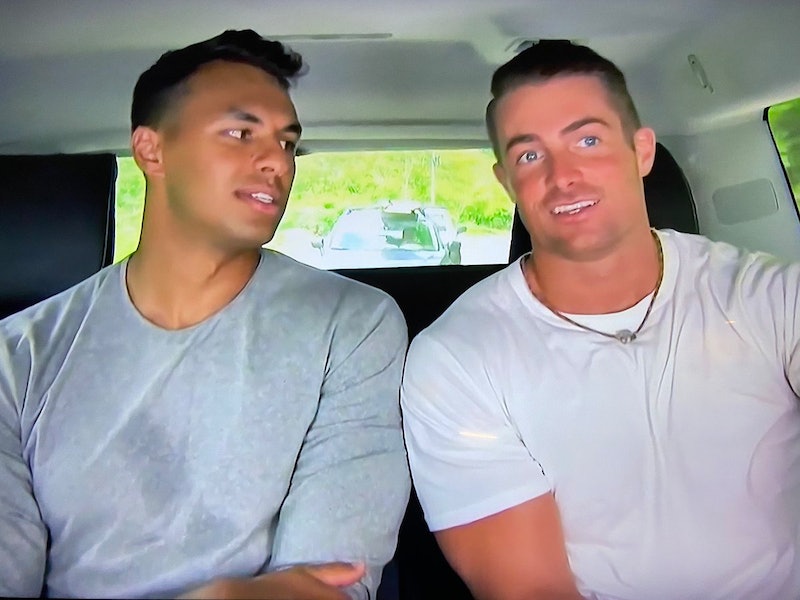 The Season 7 finale of Bachelor in Paradise was filled with breakups and engagements alike, but one of the most surprising relationships to emerge from the show wasn’t romantic at all. James Bonsall and Aaron Clancy developed a bit of a bromance during their time on the beach, and instead of continuing their respective flirtations with Anna Redman and Tia Booth at the end of the season, they decided to leave Paradise together — quite literally, as James gave Aaron a piggyback ride to the van they were taking to the airport.

After ending his relationship with Anna, James found Aaron (who hadn’t yet talked to Tia about the status of their relationship) and professed his desire to continue their bromantic relationship. “My man, I love you,” James told Aaron. “I don't know where you're at with Tia — we came in together, we gotta ride out together.” Aaron turned to Tia and asked her for her number, saying, “I have to do this fast. I actually care about you, but James is waiting right now, so we're about to bounce back to [San Diego].” Tia was more than a little shocked at the abrupt goodbye, but even her reaction didn’t stop Aaron from riding off into the sunset with his new bestie.

“I came in here looking for a big love story, and I just found a best friend, and that's big facts,” James said during the finale. “Maybe I did find love in Paradise with an unexpected person with Aaron, but that's the way the cookie crumbled.”

Fans will be pleased to know the two have continued their relationship. Since filming ended, they moved in together in San Diego, and judging by Aaron’s most recent Instagram post, they’re just as close as they were in Mexico.

“A lot has led to this point, it may not have ended how I intended, but better than I could’ve hoped with a brother for life,” Aaron captioned a photo of him and James shirtless. “Dudes as solid as the base of the great pyramid. We got each other’s six on some gang sh*t. I love you all, this is only the beginning.”