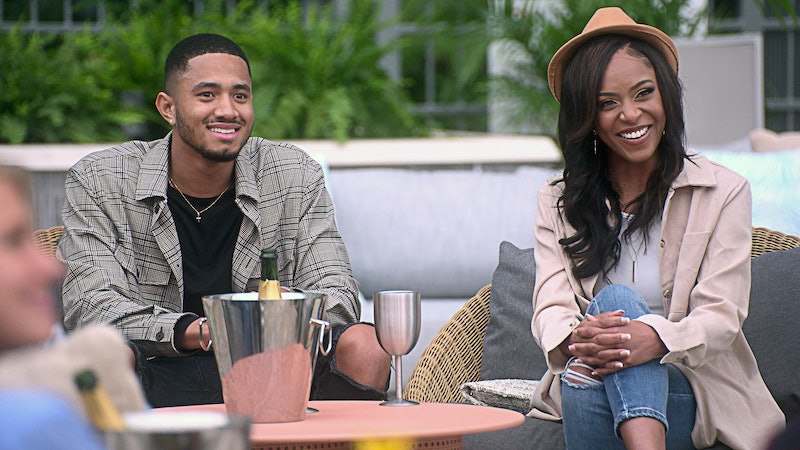 One-and-a-half years into her relationship with Randall Griffin, Shanique Brown was more than ready for him to put a ring on her finger. “He’s a little comfortable with going with the flow, and I want to make sure that we’re planning to build together in a way that includes marriage,” she explained on Netflix’s The Ultimatum, adding that she’s also ready for her first baby. Randall’s take? “I think it would be best to just be able to get rid of some debt... in order to have a great life for her,” he said.

For the first phase of the reality dating experiment, Shanique paired off with Zay Wilson to live in a three-week trial marriage, while Randall moved in with Madlyn Ballatori. Initially, Shanique wouldn’t even let Zay sleep in the same bed as her. But she changed her tune after learning that Randall and Madlyn had kissed, having already admitted that she and Zay were attracted to each other. “If Randall’s the one initiating, he should be OK with me doing the same thing,” she said, despite her and Zay both seemingly being set on choosing their original partners in the end. During one argument, Shanique even told Randall she wanted him to “just sit in a f*cking corner and miss me,” to which he replied, “I’m gonna need you to really grow up about this.”

Unlike Shanique and Zay, Randall saw a clear future with Madlyn. “Have I thought about spending the rest of my life with you? Absolutely,” he told her in one scene. He acknowledged that he and Shanique had had “a lot of arguments, laughs, tears” throughout the show, and conceded to Shanique in another scene that he couldn’t give her what she wanted. She responded, “F*ck the ring.” But after moving back in together for the second portion of the experiment, Randall and Shanique seemed to be on much more solid footing, as did Madlyn with her original boyfriend Colby Kissinger. (Zay’s girlfriend, Rae Williams, broke up with him in Episode 8.)

When it got to ultimatum day, Shanique wasn’t sure what to expect. “There were definitely moments in this experience where I’ve had my doubts about whether or not Randall and I needed to be engaged at the end of this or if we had more things that we had to figure out,” she explained to the camera. “I thought that I was losing him. I thought that Randall was really, like, forming a romantic relationship with Madlyn, and that I felt like I made the biggest mistake in my relationship.”

She said that her and Randall’s personalities “balance one another out” — she’s “more fiery” while he’s “always the calm one” — which she said is definitely what she’s looking for in a husband. “However, Randall is not a very expressive or affectionate person,” she added. “It’s honestly a non-negotiable at this point that Randall speak up about how he’s feeling for us to move forward in marriage ... I want a ring on this finger, or he’s gonna have to let me go.”

Randall, for his part, said that the clarity and confidence he’d gained on The Ultimatum made his decision of whether or not to propose to Shanique much easier. “I think we see eye to eye a lot when it comes down to the logistics of marriage. She is somebody I can see being an amazing mother to my future kids.” However, he also said the show allowed him to reflect on his and Shanique’s struggles, adding that he’d “seen Shanique act very childish” and that she could sometimes be “a little bit malicious or petty.”

Viewers eventually saw Randall and Shanique get engaged in the season finale — something he might have accidentally spoiled on Instagram ahead of time. Though the photos appear to now be deleted, Randall posted several romantic vacation pictures with Shanique on Instagram shortly after filming for The Ultimatum ended in May 2021. In the comments section of the post, a friend also referred to them as their “fav couple.” Randall went on another trip to Puerto Rico about a month later, and there was no sign of Shanique — who was completely wiped from his page just before the series premiered.

During the reunion, Shanique, who was no longer wearing her engagement ring, revealed that she and Randall broke up for roughly six months shortly after filming wrapped in May 2021, but have since gotten back together. During a joint interview with Bustle, Shanique further explained that Randall “experienced a lot of loss in the past year” — including his grandmother, godmother, and a close friend — something that ultimately had an impact on their relationship, as they tried to reacclimate to life without cameras.

“After talking about everything that happened in the show, we were like, ‘Dude, are we actually really ready for this?’” she recalled. “There were a lot of things about ourselves that were revealed in the show, and it just kind of started festering a little bit. So we wanted to make sure that we were not getting to the point where we were arguing and going back and forth. Instead, we just took some time apart to figure ourselves out.”

During their separation, Shanique says they continued communicating and occasionally hanging out, “but I think it was just better for us to just be separate and not have the pressure of an engagement looming over us while we were trying to figure out all that junk.”

Randall, for his part, pointed to the “scary” filming process, explaining that they quickly realized they still had some issues to address before getting married and “made the mature decision” to take some time apart. “We both took accountability for our actions, and it helped our communication grow a lot bigger, a lot stronger, and our love as well,” he said. “So I think that break really saved our relationship and made it really strong. We’re the strongest we’ve ever been, from what I’ve seen.”

Since rekindling their relationship, Randall and Shanique, who has her own lingerie, swim, and loungewear brand called Syn’s Closet, have been “really happy” and “having a lot of fun,” and have taken several vacations together. They’re also now living together, and, as Randall jokes, yes, their new place has “plenty of closet space” for Shanique.

This article was originally published on April 6, 2022