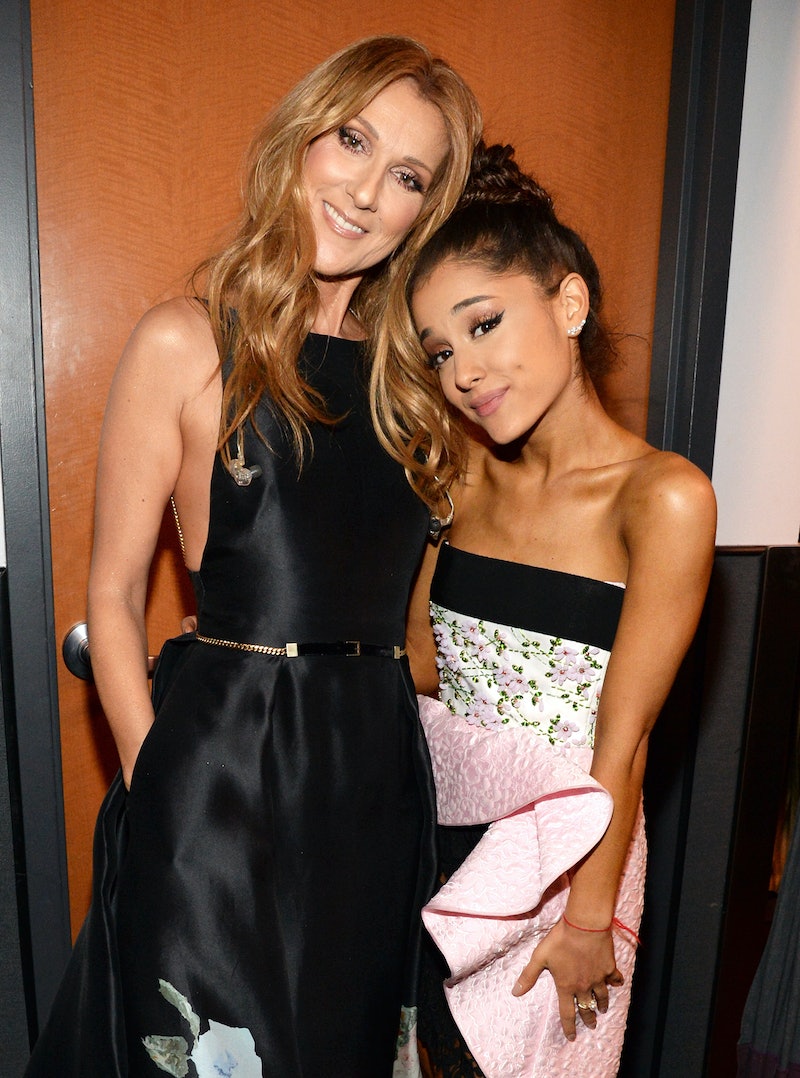 Before she is a two-time Grammy winner, Victorious star, or even the newest coach of The Voice, Ariana Grande is a master of impressions. The star has repeatedly made headlines for her spot-on impersonations of music legends, and recently, she used her skillset as a punchline. During the Oct. 4 episode of The Voice Season 21, Grande pulled out her impeccable Celine Dion impression, much to the chagrin of her fellow coaches Kelly Clarkson, John Legend, and Blake Shelton.

The judges were commenting on the audition of 17-year-old Xavier Cornell, who performed a cover of Katy Perry’s “Teenage Dream” and drew comparisons to Dion’s iconic Titantic theme song, “My Heart Will Go On.” “I thought that was a really beautiful take on that song,” Grande told him. “It almost sounded like that song from ‘Titanic’... At the end, you did like, coincidentally, the same run.” Shelton teased Cornell, saying, “I sure hope you don’t get sued for stealing that lick” from Dion, which inspired Grande to pretend to be her. Mimicking Dion’s Québécois accent, Grande picked up an imaginary phone and said, “Hello? That’s my run!”

You can watch the impression at the 1:30 mark in the video below:

As most of us would, the judges busted out laughing almost immediately. “Oh my god, I love your impression of her,” Clarkson who landed Cornell on her team, told Grande. The moment was far from the first time that Grande pulled out that accent.

Grande first showed off her mind-blowing array of musical impressions in 2015 during an appearance on The Tonight Show Starring Jimmy Fallon, where she imitated everyone from Dion to Britney Spears and Christina Aguilera.

The 2015 video went so viral that when she hosted Saturday Night Live in March 2016, they created an entire skit around her impressions, where she imitated Shakira and Whitney Houston. She also played Jennifer Lawrence in a separate skit.

The singer has continued to showcase her impressive impressions over the years, especially on late-night shows. In 2018, she returned to The Tonight Show and gave a spot-on Jennifer Coolidge, using one of her iconic lines from Legally Blonde. At this point, one of these artists need to return the favor and give fans an accurate Grande impression.

More like this
Zach Reveals The Chaotic 30 Minutes That Were Cut From ‘The Bachelor’ Premiere
By Grace Wehniainen
'RHOSLC’s Heather & Whitney Are Still On A “Friendship Break” After Season 3 Reunion
By Jake Viswanath
RHOP’s Robyn Dixon Explained Why Juan Paid For Another Woman's Hotel Room
By Brad Witter
Everything To Know About 'The Real Housewives Ultimate Girls Trip' Season 4
By Jake Viswanath
Get Even More From Bustle — Sign Up For The Newsletter
From hair trends to relationship advice, our daily newsletter has everything you need to sound like a person who’s on TikTok, even if you aren’t.