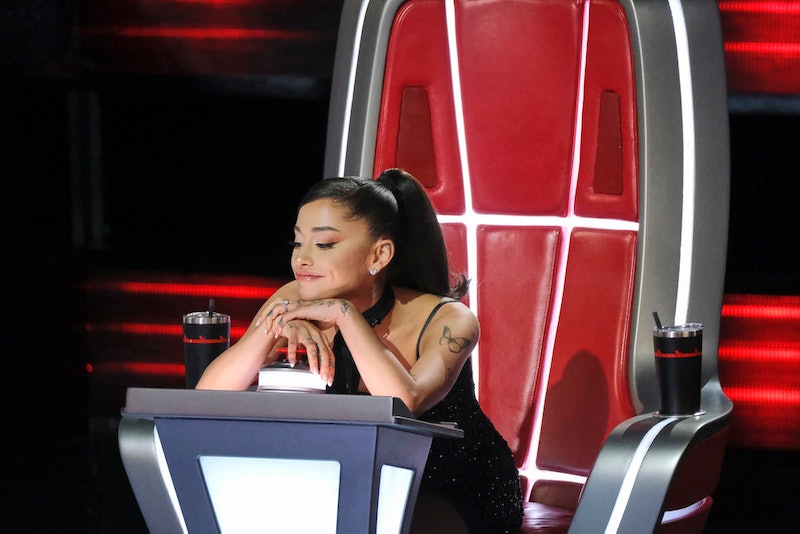 When Ariana Grande first signed on as a judge on The Voice, she was excited. A longtime fan of the show, she told Entertainment Tonight in September, “It’s such wholesome, inspiring television, and I love seeing the different voices and watching so many people start careers for themselves. It’s a beautiful, amazing thing.” But now that the season has entered its battle rounds and the judges have to start making cuts, the competition is getting emotional for Grande. During the show’s Oct. 11 episode, the pop star broke down in tears while preparing to eliminate her first contestant.

Grande’s team competed first during the episode, and she paired contestants Katie Rae and Bella DeNapoli to perform a rendition of “No More Tears (Enough Is Enough)” by Barbra Streisand and Donna Summer. “This song means a lot to me,” said Grande. “Me and my mom would sing it together in the car all the time.”

Once they finished performing, it came time for Grande to choose one singer to advance to the show’s Knockout round and send the other one home. “I adore you both so much,” she said while choking up. “You’re both so consistently phenomenal. There’s nothing that either of you can’t sing, and I feel so privileged to work with you and to have spent this time with you both. I’m just so proud of you both.”

Before announcing her decision, the singer joked, “I literally talked to my therapist about this.” In a twist, she then picked Katie as the winner and used her one and only save to keep Bella from going home.

This isn’t the only instance of Grande taking an unconventional approach to her position as a judge. During a Sept. 20 interview on The Kelly Clarkson Show, the “Positions” singer revealed that her close connection with contestants could get her in trouble with NBC. “I’m obsessed with my team. I talk to them all the time,” she said. “I’ve broken every rule in my contract. I talk to them all, all the time. I’m like, DM-ing them. They’re like, ‘You’re not supposed to do that,’ and I’m like, ‘Sorry.’”

More like this
Ariana Grande & Kristin Chenoweth Sing A Wizard Of Oz Classic On TikTok
By Alyssa Lapid
'RHOSLC’s Heather & Whitney Are Still On A “Friendship Break” After Season 3 Reunion
By Jake Viswanath
RHOP’s Robyn Dixon Explained Why Juan Paid For Another Woman's Hotel Room
By Brad Witter
Everything To Know About 'The Real Housewives Ultimate Girls Trip' Season 4
By Jake Viswanath
Get Even More From Bustle — Sign Up For The Newsletter
From hair trends to relationship advice, our daily newsletter has everything you need to sound like a person who’s on TikTok, even if you aren’t.