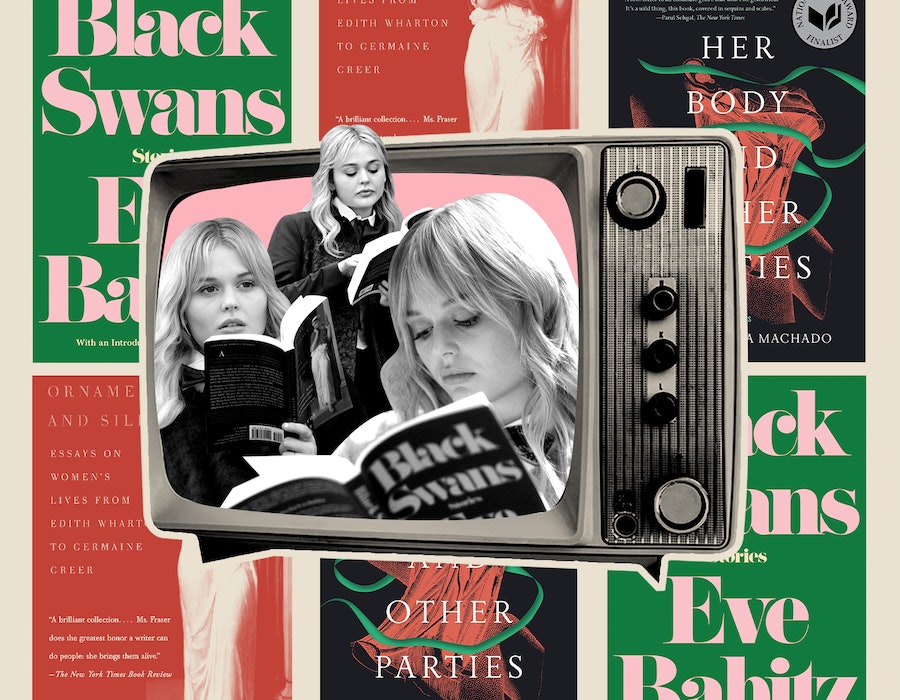 Early in HBO Max’s Gossip Girl reboot, the tastemakers of Constance Billard perch on some familiar steps. In an echo of the original cast, they’re chatting, flirting, and texting. Off to the side, the new iteration’s resident Blair Waldorf-type, Audrey Hope, is reading Kennedy Fraser’s 1996 criticism collection, Ornament and Silence. Audrey’s display of literary solitude is by no means the central conflict occurring outside the Met — that would belong to the arrival of new girl, Zoya — but the subtle moment still managed to make a splash. “All I kept thinking about was what book Audrey was reading when the whole gang was chilling at the met steps… Kept squinting my eyes to try and figure out the title,” wrote one fan after the episode premiered. “Audrey Hope is MY popular book nerd girlfriend!!!! No one else’s!!!!!” tweeted another.

While the original Gossip Girl spawned fan sites tracking down each character’s designer wardrobe, Audrey drew a different kind of cult following: a syllabus-based one. Her Goodreads profile, set up by the show’s social media team, was the number-one followed account, according to the website’s ranking, in mid-August. The book club for the fictional school from the show has over 1,600 members. An organically organized Audrey Hope book club on Twitter is currently reading Black Swans by Eve Babitz. It seems that Audrey has ascended to fan-favorite status not just for her territorial sneer (devastating) but for her literary tastes (impeccable).

The new Gossip Girl characters’ need to highlight their literary engagement underlines how the ways we display social clout have shifted between the original and the reboot. “I’m a huge fan of the original series and I don’t remember books being as much of a thing,” says Tyler McCall, the editor-in-chief of Fashionista.com and a self-described “part-time Gossip Girl historian.” She sees books as a signal of each character’s different priorities, both from their counterparts in the original series and from each other. “Julien is not a character we see with books a ton. What does it say that her sister Zoya had a stack by her bed of James Baldwin, Toni Morrison, and all these formative black authors?” For McCall, books are an efficient strategy — prop and proof! — to demonstrate that Zoya, Audrey, and co. have prioritized their critical minds as tools in their social machinations.

In 2021, a well-selected book is a status symbol. Several models at the pinnacle of It Girl influence foregrounded their literary habits: Kaia Gerber has a book club; Emily Ratajkowski and Kendall Jenner famously read as well. Whether in paparazzi photos or on a scripted TV show, books have become a powerful and communicative visual distraction. (See: Jenner photographed on a yacht while reading a dog-eared copy of Tonight I’m Someone Else by Chelsea Hodson; Shiv Roy reading Sally Rooney’s Conversations With Friends while contemplating divorce on Succession.) On Gossip Girl, Audrey totes around copies of Carmen Maria Machado’s Her Body and Other Parties and Elena Ferrante’s Days of Abandonment. These titles are purposefully edgy — the perfect shorthand for showing you’ve got an academically daring female gaze going on. If the paparazzi, or Gossip Girl, is going to photograph you anyway, getting a book and its title between you and the camera is at least a way to provide your own caption.

Reading is a public way to reveal your private life — a very Gossip Girl concept.

Unlike the series’ other omnipresent accessory — iPhones — books also have the advantage of a distinctive aesthetic. Like a piece of jewelry, books are extremely variable in color and style. Audrey matches her pastel-covered reissue of Black Swans to a fuzzy cropped sweater. The books might be intellectually chic, but they’re never going to clash with the whole look.

The way the characters employ their libraries provides deep insight into their personalities. Marni Papadopoulos, the props stylist for Gossip Girl, compares the newly arrived Zoya’s twitchy bookishness to Audrey’s literary dismissal of the social scene. “Audrey and Zoya use the same tool so differently. Zoya is a little more introverted, so she’s reading [for] comfort,” says Papadopoulos of Zoya’s propensity to hide behind social justice rooted books during tense moments at her new school. In contrast, when Audrey deploys a book, it’s not to hide, but to make a statement. The uber-popular girl broadcasts her preference for (often white) feminists — from the The Complete Poems by Anne Sexton to Joan Didion’s The White Album — wielding their works like tools in her arsenal.

Do these books actually communicate a deep engagement with literature, or do they just prove that readerly habits are a shortcut to social superiority? Of course it’s both! Reading is a public way to reveal your private life — a very Gossip Girl concept. These characters aren’t just reading in their bedrooms or holed away in a study room, they’re putting these texts proudly on display in public. Nowhere is this made more obvious than a scene in which the blissfully quiet library serves as the backdrop for two characters to conduct a full-on makeover and a full-volume conversation. Save for the two of them, the library appears to be completely unoccupied. The dusty repository of books sits ignored, but poised, in ornamental silence — waiting like an ingenue to be plucked and brought out into the light for the attention of some gossip, girl.