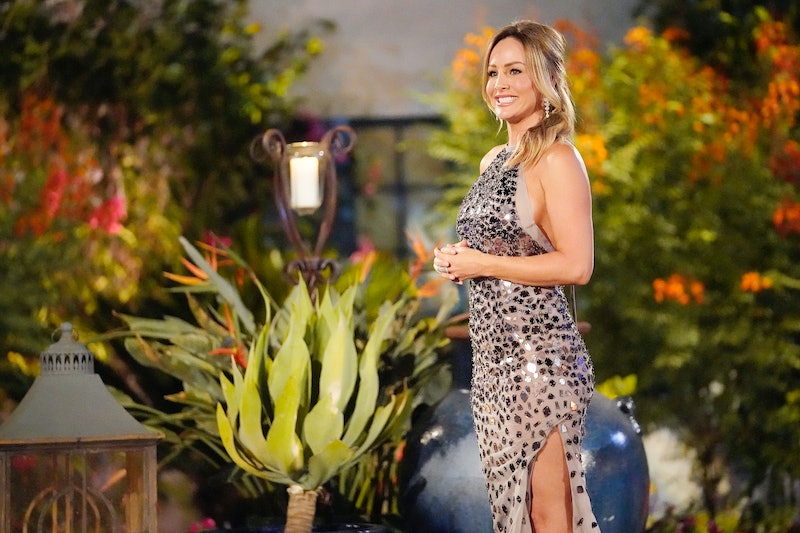 The coronavirus pandemic forced Clare Crawley to postpone her Bachelorette season, but it also affected her on a more personal level. Clare's mom, Lilia, has Alzheimer's and dementia, which means Clare wasn't able to visit her at the care home she's currently living in before starting production. "A lot of people are experiencing this as well, but it's really hard for me to not be able to see her, to be able to hug her," Clare said in the first few minutes of her Bachelorette premiere, revealing that she brought treats to her mom as often as she could.

"[Quarantine] has been hard," Clare told Dale during the first cocktail party, explaining that while she was "looking forward to this, excited about this," she was also incredibly concerned about her mom. "She's doing OK, but I think the hardest thing is to have a window between us has been so hard." Despite the physical barriers between them, Clare told Eazy that her mother is still very invested in her love life. "Every single time I go and visit her, she's like, 'Where's your husband? Are you married yet?'" she said with a laugh, later adding that, "I can't wait to tell my mom that I've found somebody" after she wraps her season of The Bachelorette.

Clare first revealed that her mother was diagnosed with Alzheimer's and dementia during an October 2018 appearance on the podcast Mouthing Off With Olivia Caridi, and has since been open about the ups and downs that come with Lilia's diagnosis. "2019 was awful tough. I don’t show it often, but there were so many days where I wanted to just crumble," she wrote on Instagram in January 2020. "But my CHOSEN family, and 2 sisters fought right along side me when I was struggling. (Ya I said it) And I am forever forever grateful!! They held me up when the weight of my moms diagnosis crushed my soul. We fight together."

In May, Clare shared a photo from the "last time I got to hug my mom before quarantine" on Instagram. "She had fallen and split her nose open and had two black eyes, and I think I slept a total of two hours because I was so worried about her," she continued. "But you wouldn’t be able to tell any of that, because we were so happy just to be able to spend time together! Memories like this matter the most to me! Love heals."

In addition to sharing insight into her relationship with her mom on social media, Clare has also talked quite a bit about her close bond with her father, James, who died in 2004 from brain cancer. "When my dad passed away, I feel like it just shattered my world," Clare, who is the youngest of six, said during Juan Pablo Galavis' season of The Bachelor in 2014. "One of the things my dad did before he passed away, [is that] he made a DVD for my future husband to watch. But I’m saving it for the right man to watch it. I am looking for a man that is just like my dad: strong, loving, gentle, compassionate and just a real, genuine, kind man."

While speaking with Chris Harrison before meeting her contestants, Clare explained that he made that video "in the last few weeks of his life. He wasn't thinking about dying, he was thinking about his daughter. It's something that's very special to me." And when it comes to narrowing down the men, Clare explained she will be looking for someone like her father. "He somebody who always wanted me to follow my heart. I couldn't be more proud to have a dad like him, to set an example of what a real man is, how a real man treats women. I know [gentlemen] exist, because he was that example."