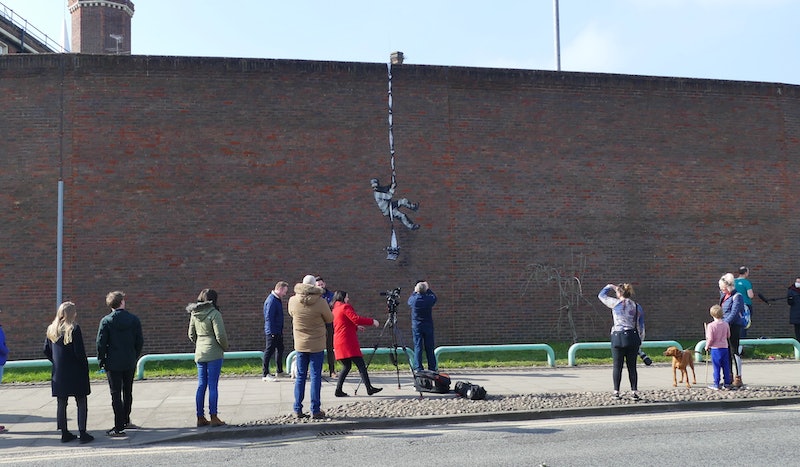 One of the UK's most celebrated modern artists has reportedly unveiled a new piece today (March 2). A painting in classic Banksy black-and-white style showed up overnight and already fans of the secretive artist have gathered around to have a peak.

The image, which is on the side of Reading Prison in South East England, depicts a prisoner escaping on a chain of paper extending from a typewriter at the end. Some have suggested it might depict writer Oscar Wilde, one of the most famous inmates at the former prison. The Picture of Dorian Gray author stayed at the prison between 1895 and 1897. He was arrested for his relationship with Lord Alfred Douglas as at the time homosexuality was deemed illegal. And after his experience in prison, Wilde wrote the poem Ballad of Reading Gaol.

At the time of writing, Banksy is yet to confirm that he is behind the image – something he typically does via his Instagram page in the days following a painting's unveiling.

Reading Prison was at the centre of a recent campaign petitioning for the building to be turned into an arts and culture complex. The Grade II listed structure has been derelict since 2013 and now then the likes of Kenneth Branagh and Natalie Dormer are calling for it to be re-purposed. In 2016, the building hosted exhibitions as part of the Year of Culture events programme in Reading.

In 2019, Banksy caught the public’s attention when reindeers appeared by a bench in Birmingham. In the same year, Banksy also made a customised stab-proof vest in for Stormzy to wear at Glastonbury in greyscale of the Union Jack flag.

Last year, Banksy marked the COVID pandemic with two artworks, one in a Southampton hospital and one in a London tube carriage.