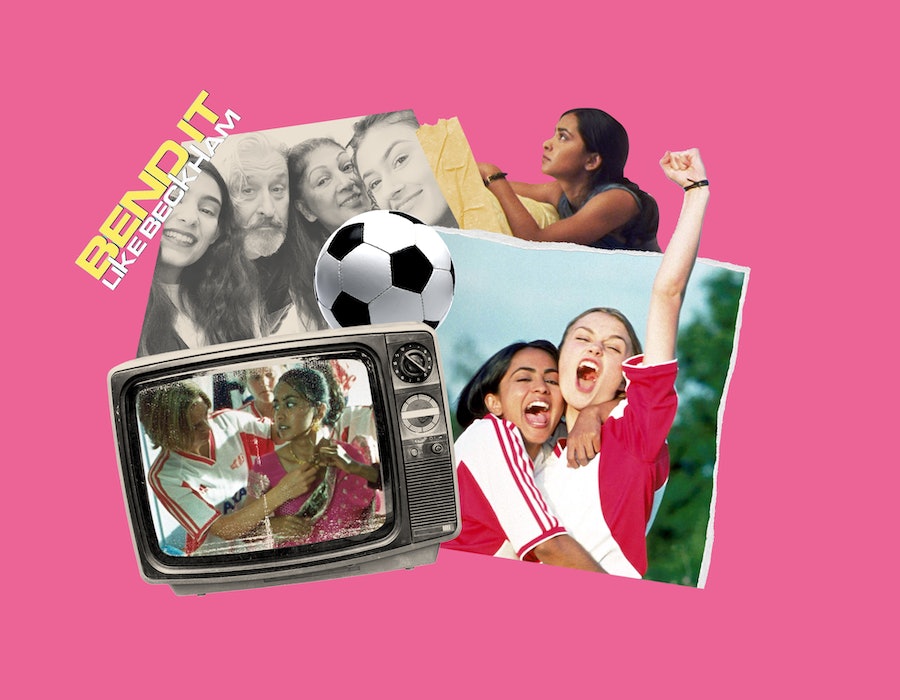 Bend It Like Beckham is 20 years old. Yes, really. It has been two decades since Gurinder Chada’s classic football film first hit our screens. With a killer soundtrack, stand-out ‘00s fashion, and iconic lines like “Anyone can cook aloo gobi, but who can bend a ball like Beckham?”, it is fondly cemented as one of the cinematic greats.

Even 20 years on, it remains as one of the few film that accurately depicts the dynamic of my own family. Though, more recently it has been refreshing to see the South Asian casting in TV shows like Bridgerton and Never Have I Ever, they don’t match Bend It Like Beckham and its realistic representation of growing up South Asian in modern day, post-9/11 Britain.

Focusing on the life of Punjabi-British girl, Jesminder ‘Jess’ Bhamra (Parminder Nagra), it was the first time many South Asian viewers like me saw our lives and families reflected on-screen. Jess’ mum cooked curries like our mums did. The colourful weddings they had looked like the ones we went to. The natural switching from English to Punjabi sounded like home.

But, despite its enduring relatability, there is still that one moment, when Jess confides in Joe about the real reason she was upset during the match and why the red card the ref had given her was out of order: she was called a P*** by a football player on an opposing team. Joe replies with the infamous line, “Jess, I’m Irish. Of course, I understand what that feels like.” Equating her experiences as a South Asian minority woman to his own in a way that is neither helpful nor relevant.

The quote has become an internet sensation since, meme-efied as a peak response to misinformed or racist comments. Joe, played by Jonathan Rhys Meyers, is just a bit of a joke. His lack of understanding for the specific difficulties South Asian women have to endure, is more than a little uncomfortable to watch. But, as a child, it was still the moment from the film that made me consider my own identity the most.

Though my mum was born in Lahore and belongs to a large Pakistani family, my dad is Irish Catholic. Growing up in Birmingham in the ‘70s, he was regularly made fun of because of his Irish heritage and recalls his family being spat on because of their accents. Particularly after the IRA 1974 bombings in Birmingham, it was not uncommon for him to be told to “go back” to where he came from. “It was difficult,” he tells me. “Being Irish meant it was nearly impossible to be accepted in Britain.” It isn’t a nice feeling, knowing he felt rejected from the country he called his home.

Joe’s attempt in Bend It Like Beckham to liken his experience as an Irish, white man to an Indian woman is entirely misplaced – and as someone with Irish heritage, I am acutely aware.

Similarly, in the 1960s, signs reading “No Blacks, No Dogs, No Irish” were put up outside on-sale houses and Irish immigrants were regularly turned away from jobs. Some reports even suggest that anti-Irish views have been present in England as far back as the 12th century, with official accounts from the time describing the Irish as “barbarous people” characterised by “laziness”.

Anti-Irish abuse isn’t totally a thing of the past either. In 2019 Azealia Banks was reported as calling Irish women “ugly” after an alteration on the Irish airline, Aer Lingus, and even responded to one follower on Twitter by saying that Irish people are “a bunch of inbred leprechauns”. Post-Brexit, too, reports suggest that anti-Irish hatred is once again on the rise. Still, Joe’s attempt in Bend It Like Beckham to liken his experience as an Irish, white man to an Indian woman is entirely misplaced – and as someone with Irish heritage, I am acutely aware.

Though my dad admits his Irish heritage has “never held him back”, there have been times he has tried to argue his experience growing up in Britain as an Irish immigrant is similar to my mum’s experience, having immigrated from Pakistan. Though both have undoubtedly suffered in different ways because of their heritage, unlike my dad, my mum’s race is something she can’t camouflage. Her difference is inescapable and his attempts at allyship are ill-judged.

My mixed-raced identity means I sit on the axis of both cultures. But though my Irish heritage has been a big part of my upbringing, it is not something I think about actively. While my Brown skin colour marks my “otherness” overtly, my Irishness can remain hidden. White, Irish people, like Joe, profit from a world that is built for white success; a privilege those of us who aren’t white are never afforded. And, honestly, I’ve never been concerned about being judged for being Irish.

Unlike for Black or Brown people, being Irish doesn’t increase your chances of being stopped and searched, and a Celtic name is less likely to prevent you from progressing in the workplace. In fact, research by the University of Toronto suggests people with names of Indian and Pakistani descent are 28% less likely to be called for an interview than those that are anglicised. Culturally, it is easier for Irish people to masquerade within British society too. English is most people’s first language in Ireland, so communication can flow more naturally, and with similar food, clothing, and cultural cornerstones, another noticeable difference is avoided.

Like Jess, I’ve been called a P*** - a racial slur that has historically been associated with violence against South Asian people, and the effect it has is real and visceral. It is a brutal, hate-filled word that makes you feel like you’re worthless and unwanted, wholly because of your race. Though Joe, my dad, and other Irish people may have been subjected to the prejudice being Irish brings, they can never understand the sting of being on the opposite end of racism.

White, Irish people, like Joe, profit from a world that is built for white success – a privilege those of us who aren’t white are never afforded.

Despite its shortfalls, watching Bend It Like Beckham for the first time felt different – and even as a six-year-old in 2002, I knew it. Finally, our everyday existence was a central role in cinema. It made me feel, at last, our stories were worth telling. And I’m not alone. Symi, 25, from Birmingham describes watching Bend It Like Beckham as a mind-blowing experience. “It was the first time I was ever exposed to a relatable depiction of life as a Brown girl in the UK,” she says. “It was something I’d never seen done before. It fundamentally helped me navigate and come to terms with my identity, which had been so underrepresented in the past – even though I am a third-generation immigrant.”

Kymi, 30, from Leicester, was in her early teens when she first saw the film, agrees. “The film made me realise what I’d been missing,” she says. “I didn’t know I needed to see people who looked like me in film. But, it was refreshing to see a story about a face like mine, who was trying to balance their Indian culture with life in Britain.”

Mariam, 24, from London also found it much easier to relate to than any other film she’d watched previously. “It was like seeing bits of my own life on screen. Jess was Brown, Asian, and from London, like me. Her family set-up seemed usual to me in a lot of ways, and I understood her struggles – racism, bullying, and trying to fit in,” she says.

There is much more we could do to educate ourselves on Britain’s mistreatment of the Irish, and it would be naïve to overlook Joe’s feelings completely. But, in a film that is otherwise a celebration of South Asian culture, so long underrepresented in mainstream media, it is the one moment that misses the mark. How can a white man possibly understand the stigma and pressure of being a South Asian woman? He can’t – and that is a privilege he should acknowledge.

Returning to Bend It Like Beckham, 20 years later, brings with it a familiarity and warmth. The characters are still recognisable all these years later. But, Joe’s efforts to share Jess’ pain after she is racially abused still leaves me reeling.