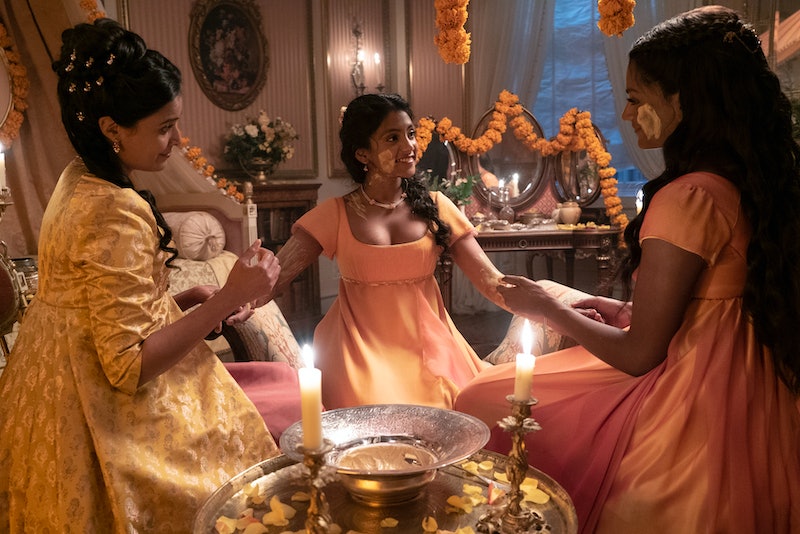 When Bridgerton first arrived on Netflix in 2020, I watched the entire season in one weekend. I’m not usually a fan of period dramas, but having thoroughly enjoyed Season 1 (and Regé-Jean Page as the Duke of Hastings), when Shondaland announced it was casting two South Asian leads in the second season, I was looking forward to seeing how they would be portrayed.

As a British Indian-Pakistani, I’ve grown up watching mainstream TV shows where the only Asian representation we had were Apu in The Simpsons or Raj in The Big Bang Theory, and characters that exploited our cultural experiences for comedy purposes. The representation has been sparse and laced with microaggressions, with only a few exceptions. As a teenager, I remember the impact of Jess in Bend It Like Beckham and the Patil twins in Harry Potter, but I don’t remember other instances where South Asian women were truly depicted as themselves.

Even within the Bollywood film industry, the representation of dark-skinned South Asian women is practically nonexistent. Bollywood famously prefers to cast actors with lighter complexions. It says so much that Bridgerton has already done more in eight episodes than Bollywood ever has.

Kate and Edwina Sharma, played by Simone Ashley and Charithra Chandran, respectively, are introduced to the ton as love interests for Viscount Anthony Bridgerton in the second instalment of the series. When we are first introduced to Kate in her first scene with Anthony, I noticed how her very first words were “Baap re,” which is the Hindi substitute for “oh my god.” I actually had to pause and rewind so I could hear it again because I really wasn’t expecting her to speak Hindi on the show at all. Later in the episode, Kate also explains how she and Edwina are fluent in both “Hindustani and Marathi,” with Edwina later referring to Kate as “Didi,” meaning elder sister in Hindi, throughout the season, and Kate referring to her as “Bon,” which is a Bengali term of endearment. The use of these languages and phrases showcase the beauty of the shared culture of the subcontinent and is one of the reasons why Season 2 has been so important.

Interestingly, both refer to their father as “Appa,” which is actually Tamil, but given both actresses are actually from the Tamil subculture themselves, I wonder if this is purposely done. Although some viewers have pinpointed the different languages are confusing, I felt this was a true representation of India, a country that has no fewer than 22 official languages and thousands of dialects.

As the series continues, more elements of South Asia are celebrated. Famous for our tea export, the scene where Kate puts cardamom in her tea was subtle, but something I resonated with immediately. It is how my family makes masala chai, too; crushing cardamom pods directly into the teacup.

The fact that we get to see two Tamil women desired instead of exotified in such a popular show is something that should be celebrated.

Season 2 also focuses on the power of South Asian sisterhood. In Episode 3, Kate applies oil to Edwina’s hair, in an unspoken tradition and love language that dates back centuries. There’s also a focus on Kate wanting to sacrifice her own happiness for the sake of her family, representing the experiences of many eldest daughters in South Asian families. Many older daughters in South Asian families assume a role similar to their parents and are reminded of how their actions can affect their younger siblings. With a strong sense of familial duty, Kate is no different, willing to give up her own dream and ignore her own feelings for the little sister she has raised. “It does not matter what I want,” she tells Anthony in Episode 4.

The most important representation comes in Episode 5, where Kate and Edwina’s mother, Mary Sharma (Shelley Conn), are helping her prepare for her wedding. Applying turmeric paste, known as Haldi, prior to the wedding day is a common (primarily Hindu) ritual, though almost every subculture across the region has their own take on it. What also got my attention in this scene was the choice of music. Known widely for its classical covers of popular bops, Bridgerton included the title track from one of the most famous Bollywood films, Kabhi Kushi Kabhie Gham, for this scene, and one that filled me with joy since it’s one of my favourite films that I never thought would get a nod from mainstream media.

The biggest signifiers of the Sharma’s Indian heritage are shown in their clothes, with Edwina wearing traditional Jhumka earrings throughout. There are subtle details of this influence intertwined gracefully throughout the show, in the gold jewellery, bangles, pearls, silk, and the beadwork. I personally loved how Kate wore a shawl made from Banarasi silk, which originates from my family’s home state of Uttar Pradesh in India.

Ultimately, Season 2 of Bridgerton is exactly how South Asian women should be portrayed. It’s one of the best examples of representation I’ve seen in years where South Asian women aren’t forced or tokenised. In fact, it’s affirming and empowering. South Asian women are more than just a tick-box exercise, we deserve so much more than that, and Bridgerton is helping to start this conversation. I wonder how my generation would have felt, had we seen this representation that we so needed when we were a lot younger, growing up in Britain, but torn between two cultures. We’re so often confined to stereotypes or supporting characters, so it’s refreshing to finally see a show where we are not just represented how we should be unapologetically, but fully embraced as we are.

The representation in Bridgerton may not resonate with everyone, but the fact that we get to see two Tamil women desired instead of exotified in such a popular show is something that should be celebrated. To see darker-skinned South Asian women get the flowers they truly deserve is so important, and I hope this is just the start.