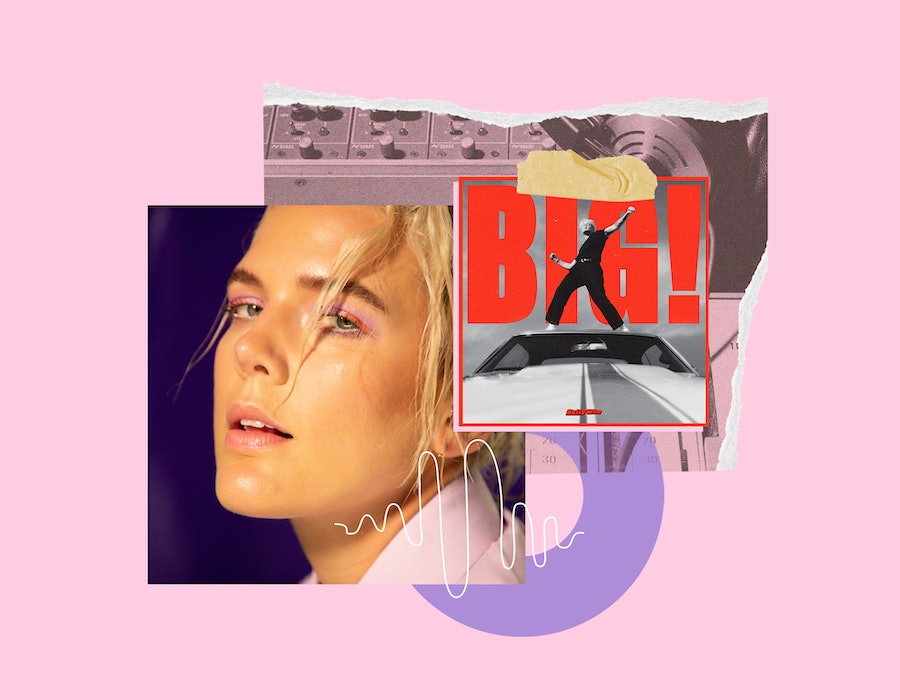 Betty Who is finally ready to really introduce herself – nearly a decade after you first heard her. On her fourth studio album BIG!, out Oct. 14, the Australian pop sensation digs deeper into her psyche and reclaims her former insecurities, like her 6’1” frame that inspired the album title. “I’m not pretending like I'm 5’4 — I'm actively trying to stand out and be myself as opposed to trying to hide with everybody else,” Betty Who tells Bustle.

While BIG! feels like Betty’s proper debut to her, the 31-year-old singer born Jessica Anne Newham came on the scene in 2013, when her ’80s synth-pop anthem “Somebody Loves You” went viral thanks to a flash mob marriage proposal shot inside a Home Depot. At the time, she’d set her sights on pop stardom, but her former label was hesitant about riding the song’s wave.

“When ‘Somebody Loves You’ went viral, the only viral songs were ‘Friday’ by Rebecca Black and ‘Selfie’ by The Chainsmokers, which was categorically at the time one of the most hated songs on the Internet,” Betty Who says. “It was starting to get added to radio stations and my label held it back because they didn’t want me to be the girl from the viral video, a.k.a. Rebecca Black. The moment happened and we missed it fully. Then they were talking about how I needed my viral moment for my second album, and I was like, ‘F*ck you guys. I had a viral moment. You literally stomped on it.’ So it just goes to show how much nobody knows anything.”

The experience taught Betty to “never hold back ever again,” and after experimenting on two more albums — plus ditching that record label — she’s fulfilled that goal. BIG! lives up to its ambitions, with songs that criss-cross genres and subjects, from Broadway-inspired numbers to heart-wrenching ballads about bygone friendships. The singer, who married photographer Zak Cassar in 2020, also celebrates her bisexuality on songs like “I Can Be Your Man,” though she’s still navigating how to represent LGBTQ+ communities in her music. “Listen, there are so many people who have experienced more hardship who could speak on the gay perspective so much better than I could,” she admits. “I’m literally married to a male. I get it. But the older I get, the queerer I feel, the gayer I feel, the more butch I feel.”

BIG! also marks a crossroads in Betty’s career. With age, she’s slowly tempered her ambitions of megastardom. “I don’t know if I’ll be Taylor Swift playing stadiums by the time I’m 35 or if I’ll be playing the Greek in L.A. and writing a Broadway musical for seven months out of the year. Either sounds sick,” she says. “Childhood me wanted to be the biggest pop star on the planet, and I still want that. But I have other stuff that I also want to do, and I think that’s really freeing.”

Below, Betty Who discusses her new album, which celebrity she wants at her funeral, and who she’d leave her husband for.

On The Vampire Diaries & Her Dramatic Funeral Plans

What is something really cheesy that you love unironically?

The Vampire Diaries. I’m literally obsessed with it. I can’t pick between Stefan and Damon. I love them both. I want to have sex with them at the same time, so I refuse to choose one.

“The Real Slim Shady” [by Eminem]. Nobody wants to hear a singer actually sing, you know what I mean? I sing on stage all the time. I don’t need to go to karaoke and have a face-off singing a song, so rap or “Don’t Stop Me Now” by Queen. You know what I mean? You have to get everybody going.

What song do you want played when you have a wedding ceremony?

I have a wedding playlist. It’s a song called “Thirteen” by Big Star, and it makes me cry and I love it.

Conversely, what’s one song you want played at your funeral?

I am the kind of person who wants everybody to be literally devastated and miserable and sobbing at my funeral. Some people are like, “I want everybody to have a party.” No, I want everybody to talk about how much they loved me and cry all day. I never want you to get over it. I never want you to move on. Maybe “Tears in Heaven” [by Eric Clapton] is too on the nose. “Because You Loved Me” by Celine Dion. I want to literally rip into everybody’s hearts through [their] chests and pull their hearts out with my ghost hand. I also want Kesha at my funeral ghost-hunting me.

What was the first CD that you ever bought, or vinyl, or tape?

It was a tape. Britney Spears. A-side was “...Baby One More Time.” B-side was “Sometimes.”

What was the first song you slow-danced to or made out to in middle school or high school?

I went to an all girls school, so when I think about the one or two co-ed dances I went to, the exclusive soundtrack was “Get Low” [by Lil Jon]. I wish I had a fun romantic one like “Time After Time” by Cyndi Lauper, but when I think about school dances and dancing with a member of the opposite sex, it’s like to Lil Jon and Flo Rida. It’s not cute.

Blackpink. I think when you’re in the music business, your fan brain turns off. You play it overtly cool about some stuff. Normally, I go to live music and I sit and I watch in the back because it is work for me in so many ways. I’m not there to scream and sweat and feel your sweat and be in the presence of an idol. Blackpink unlocked the obsessive fan, the girl that was watching Britney [Spears’] Dream Within a Dream Tour that made me want to do this in the first place.

What’s an instrument that you wish you played?

I love [mandolinist] Chris Thile, and my dad got me a mandolin for Christmas. So I would love to be really fluent on the mandolin. I think that’d be sick.

What’s one song that you can never listen to again and why?

“Number One Fan” by MUNA. I blew it out. It’s just because I listened to it so f*cking much. Also “Overnight” by Maggie Rogers. It’s often songs that I loved so much that I actually killed them.

Thinking that pop music isn’t the most important genre of all time. When anybody turns their nose up at Katy Perry, I’m like, “Literally shut your f*cking mouth. You sound stupid.” I have so much reverence and respect for pop and the way that it speaks to literally billions of people. You try writing “California Gurls,” you f*cking idiot. No one could. It deserves so much more respect and people disrespect pop artists all the time. It’s always about their looks, their weight, their boobs. It’s not about the music and the music unites generations.

On Performing For Obama & Who She’d Leave Her Husband For

What’s the moment that made you feel like a musician?

When I played an event for the DNC and I got to meet Obama. Music brought me into this position to meet the president of the United States, a man that I greatly admire and have the biggest crush on. My parents have their picture with Obama framed in their house. My dad to this day is like, “One of the greatest gifts you’ve ever given me was this day. I can’t believe that I got to do that. And that was because you got to do that and you brought me along.” I really felt very much like I transcended something in that moment.

What’s the weirdest thing you’ve written a song about?

My instinct was “I Can Be Your Man,” which is me trying to steal my girlfriends from all of their boyfriends. I have a group chat with my three best girlfriends, and I tell them all the time how I would kiss all of them. And every time a boy is mean to them, I’m like, “I will literally fight them. I want to date you.” If we could all run off in a commune together and be sister wives, we probably would. My husband is very aware of this and I tell him often.

What’s the lyric you love the most in life?

One of my favorite Bonnie Raitt songs of all time is called “Nick of Time.” There is a verse where she says, “I see my folks are getting old, and I watch their bodies change. I know they see the same in me, and it makes us both feel strange. No matter how you tell yourself, it’s what we all go through. Those lines get pretty hard to face when they’re staring back at you.” There’s a similar John Mayer verse in “Stop This Train,” where he’s talking about his parents getting older, and I think that’s something that really always hits me.

What’s a song you’ve written that you’re really proud of?

I’m really, really proud of the song “Just Thought You Should Know” that’s on Betty and is a really important song in my sonic history. I’m really proud of the storytelling of that song and the way it speaks to people, the way people feel like they’re connected to it or the way that people share that with each other.

It’s not really even about me. It’s like somehow I’m telling this really personal story, but everybody is experiencing it for themselves as if it’s their story.

This interview has been edited or condensed.

More like this
Meghan Trainor & Daryl Sabara Are Expecting Their Second Baby
By Jake Viswanath
The Jonas Brothers' New Album Has A Very Meta Name
By Alyssa Lapid
The Beyhive Is Mad At Harry Styles After Beyoncé’s Album Of The Year Snub
By Jake Viswanath
Jessica Simpson On The Time She Was Pursued By A Backstreet Boy & An *NSYNC Member
By The Editors
Get Even More From Bustle — Sign Up For The Newsletter
From hair trends to relationship advice, our daily newsletter has everything you need to sound like a person who’s on TikTok, even if you aren’t.