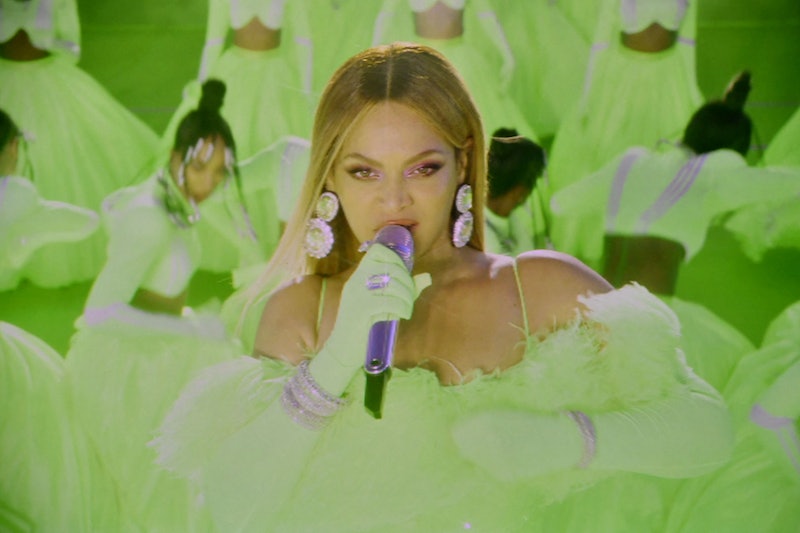 Before getting to the traditional monologue, the 2022 Oscars began with something even bigger (and TBH, much more fun): a performance of “Be Alive” by Beyoncé at the Compton tennis court where Venus and Serena Williams practiced at as kids. The rendition was introduced by the tennis pros themselves, who served as executive producers on King Richard — which, in addition to earning a Best Original Song nod for “Be Alive,” was nominated for Best Picture, Best Actor (Will Smith), Best Supporting Actress (Aunjanue Ellis), Best Original Screenplay, and Best Film Editing.

For the big opener, Beyoncé joined a choir and orchestra entirely clad in tennis ball green. She also enlisted the help of her daughter, Blue Ivy Carter (Or as some viewers put it, Blue Ivy enlisted her.) Naturally, Twitter was pretty emotional about Blue Ivy — who’s somehow 10 years old now?! — accompanying her mom for the cinematic moment. As Consequence pointed out, it was Blue Ivy’s first Oscars performance, and Beyoncé’s first in two years. “Blue Ivy is so generous to let Beyoncé share the stage with her,” @shana_masala wrote. “Blue Ivy’s cameo Oscar appearance,” wrote @iamkaylanicole. “Whew we getting old yall!”

Here are some of the best memes and tweets about the performance.

Twitter was also loving the monochromatic vibe throughout the performance.

Of course, many viewers were simply thrilled to see Beyoncé back onstage (albeit a very different kind of stage), with several rallying for more music from the singer in 2022.

As Beyoncé herself told Harper’s Bazaar in 2021, she’s been working in the studio for more than a year — and, “yes, the music is coming!” Until then, Queen Bey is surely relishing her first-ever Oscar nom.

More like this
The Best Memes & Tweets About Lady Gaga Reportedly Joining 'The Joker' Sequel
By Grace Wehniainen
The Best Memes & Tweets About Beyonce's New 'Renaissance' Album
By Radhika Menon
Taylor Swift's “Carolina” Theme For 'Where The Crawdads Sing' Soundtrack Is Here
By Jake Viswanath
What Is Elvis Presley’s Net Worth? How The King Earned & Spent His Fortune
By Grace Wehniainen
Get Even More From Bustle — Sign Up For The Newsletter