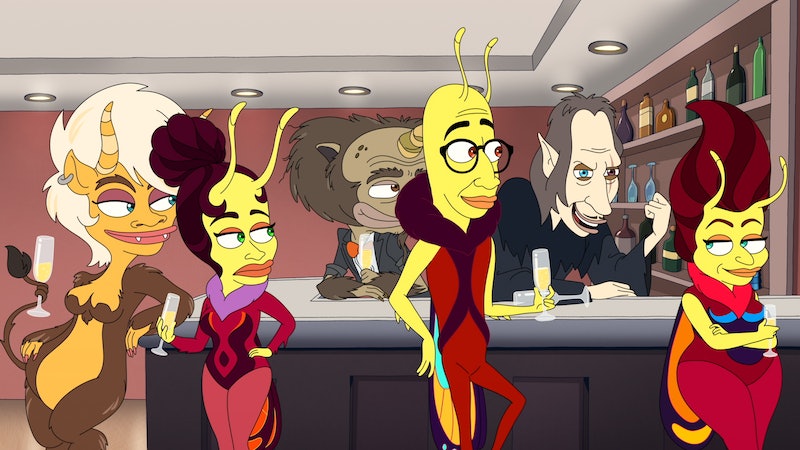 Additionally, Ayo Edebiri will reprise her role as Missy Foreman-Greenwald, which she began toward the end of Season 4 after Jenny Slate chose to step down from the role in 2020. “At the start of the show, I reasoned with myself that it was permissible for me to play ‘Missy’ because her mom is Jewish and White — as am I,” Slate wrote in an Instagram post at the time. “But ‘Missy’ is also Black, and Black characters on an animated show should be played by Black people.”

It also appears that Season 5 will further highlight Ali (Ali Wong) — a pansexual student who was first introduced in Season 3 — as well as introduce several new characters. Specifically, it will incorporate new creatures called lovebugs who have the ability to transform into hate worms depending on the kids’ emotional state. This is meant to set up Big Mouth’s upcoming spinoff Human Resources, which will explore the “far more adult” world of the creatures the kids have encountered in the original series — including the Shame Wizard, Depression Kitty, Hormone Monsters, and more.

Learn more about the actors joining the Season 5 cast below.

Goodman voices Nick’s lovebug Walter, who encourages him to pursue his crush on Jessi. However, when that backfires and Jessi publicly rejects Nick, Walter transforms into a hateworm. Goodman joins the Big Mouth cast after becoming a writer on the series in Season 4. The actor previously starred in the 2020 Netflix movie Feel the Beat and will continue to voice Walter as a main cast member in Human Resources.

Palmer voices Missy’s hateworm Rochelle, who sends Missy on a rage-filled rampage after Jessi and Ali begin to grow closer and jointly co-opt Missy’s affinity group. Palmer has an extensive filmography but most recently starred in the film Hustlers and Season 3 of the Scream television series. She also serves as a co-host of the daytime news program Strahan, Sara, & Keke. She’ll continue to voice Rochelle as a series regular on Human Resources.

Adlon voices Jessi’s lovebug Sonya, who appears when Jessi starts to wonder if her feelings for her classmate Ali are more than friendly. Adlon’s impressive body of work includes starring roles on the television shows Californication, Louie, and Better Things, as well as her Emmy-winning performance voicing Bobby on King of the Hill. She will reprise her role as Sonya as a guest star on Human Resources.

Scott is best known for his roles on the television series Parks & Recreation, Big Little Lies, and The Good Place. He’s also appeared in a number of films, most notably Step Brothers and Hot Tub Time Machine 2, and is set to star in the upcoming Apple TV+ series Severance.

The New Zealand actor, musician, comedian, and director is best known as one half of the renowned comedy duo Flight of the Concords. Clement’s voice work resumé includes roles in Despicable Me, Rio, Moana, and The Lego Batman Movie. More recently, he was a cast member on the FX series Legion, and is set to star in the upcoming films Avatar 2 and Avatar 3.

Schaal has done extensive voice acting work, including prominent roles on series such as Bob’s Burgers, Gravity Falls, and Bojack Horseman. Additionally, she’s appeared on television as a recurring commentator on The Daily Show as well as in the shows 30 Rock, The Last Man on Earth, and HBO’s Flight of the Conchords.

A cast member on Saturday Night Live since 2019, Fineman is still early in her career. She’s set to appear in the upcoming films Father of the Bride and Babylon.

Actor-director Kumail Nanjiani is known for his work on the series Silicon Valley and Franklin & Bash, as well as for starring in the films The Lovebirds, The Big Sick, and Eternals. His voice acting resumé includes roles in Adventure Time and Bless the Harts.