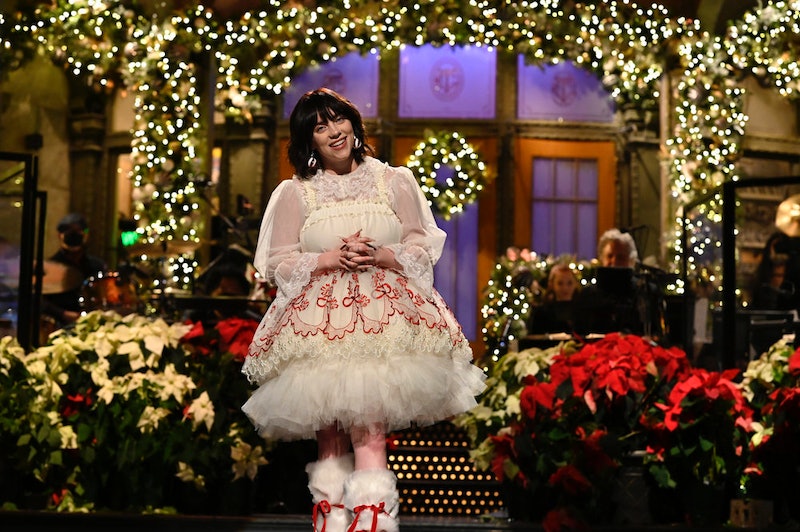 If you tuned in to the Dec. 11 episode of Saturday Night Live, well, live, you saw Billie Eilish deliver a campy Christmas outfit, two emotional performances from Happier Than Ever, and a hilarious monologue about being the second-favorite child — out of two kids. But as is often the case, one of Eilish’s most hilarious sketches didn’t make it to air.

Cut for time, the “Angelo Christmas” sketch saw the return of SNL newcomer Aristotle Athari as Angelo, an eccentric, soft-spoken musician who improvises songs based on word suggestions from the audience. Or at least, he’s supposed to — what actually ends up happening is Angelo has a hard time hearing the suggested word, and then delivers a faint, barely intelligible performance attempt. If you’ve ever been to a performance art exhibition and just didn’t *get* it, you’ll empathize with the very confused audience member (this time, played by Mikey Day) who struggles to understand what’s going on, even though his significant other (Cecily Strong) seems to love it: “It’s called culture, Doug. Read a book.”

Things get even weirder when Angelo’s fellow performer Deb (Eilish) shows up. “The Toast of Iceland,” whose fluffy white dress is adorned with teddy bears, has an equally hard time understanding her improv audience’s suggestions — and this is where the seven-time Grammy winner begins to break. “Say it for us?” she asks, holding back a laugh.

Her performance amounts to a sound check. “Check, one two,” she says. “A little louder, Gary.” But Strong is super into the song (if you could call it that). “Check, check. She’s checking on you, on all of us, during a pandemic, Doug,” she insists. If it’s nonsensical to read, that’s because it’s just as nonsensical to watch — which means you absolutely should. In her bizarre debut as Deb, Eilish proved that she’s more than capable of leaning into the absurd side of entertainment.

Overall, Eilish held her own while she pulled double-duty as both host and musical guest of the Dec. 11 episode. She performed “Happier Than Ever” and “Male Fantasy” between sketches, joined by her brother, Finneas, and had an amazing time. “THIS WEEK WAS A DREAM,” she posted on Instagram about SNL after it aired.

For the artists’ fans and famous friends, the experience was just as exceptional. Lizzo commented on Eilish’s post to let her know she “killed it,” and Addison Rae reacted simply with the word “incredible.” Even Ashley Tisdale, who wrote in an Instagram story that she doesn’t “really watch SNL that much,” tuned in. Echoing Lizzo, the actor let Eilish know she “KILLED it!”