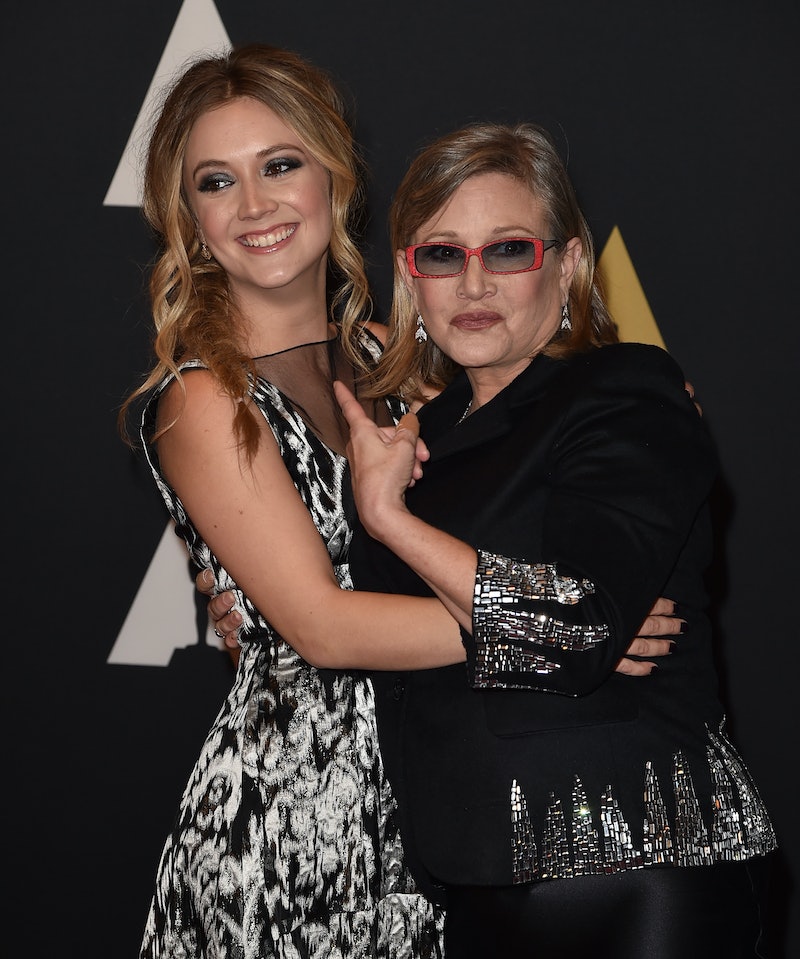 This rising star is making sure that her famous Hollywood family lives on. On September 24, Billie Lourd announced she welcomed a baby boy, and his name honors her late mother, Carrie Fisher, who died suddenly in 2016. "Introducing Kingston Fisher Lourd Rydell," the actor captioned a photo of her baby boy's feet on Instagram, along with plenty of crown and blue heart emojis. This is her first child with fiancé Austen Rydell.

While it's unclear whether or not the name Kingston is a nod to Fisher's iconic Star Wars character, Princess Leia (he is intergalactic royalty, after all), his middle name — Fisher — is clearly an homage to Lourd's mother, as well as her grandmother, Debbie Reynolds, who died just one day after Fisher. (Reynolds was married to singer and actor Eddie Fisher from 1955 until 1959 — one of the most famous marriages of the studio system days.) Lourd also managed to honor her father, Bryan Lourd, with son Kingston's second middle name.

The birth announcement came as a surprise to many of Lourd's friends and fans, as neither she nor Rydell have dropped any hints about their growing family over the past few months. However, back in June, Rydell announced that he and Lourd were engaged after about four years of dating, by sharing a slideshow of photos from their relationship on Instagram. "She said YES!!" Rydell wrote at the time, along with a series of ring emojis. "(Actually she said 'Duhhh') But I guess that’s even better than yes?!?"

According to E! News, Lourd and Rydell first dated back in early 2016, though they split sometime before the death of her mother and grandmother. However, they reconciled about a year later, and in December 2017, Rydell accompanied the actor and her father, Bryan Lourd, on a trip to see the Northern Lights in Norway in honor of Fisher. "My momby had an otherworldly obsession with the northern lights, but I never got to see them with her," Lourd wrote on Instagram at the time. "We journeyed to northern Norway to see if we might 'see the heavens lift up her dark skirts and flash her dazzling privates across [our] unworthy irises.' And she did."

Lourd has been incredibly open about dealing with the grief and shock of losing her mother and grandmother in such a short period of time. However, she has also done her best to celebrate Fisher and keep her memory alive, for both herself and the millions of people who loved Princess Leia. "Not that I’m some kind of grief expert by any means, but on milestones (or whatever you want to call them) like this, I like to celebrate her by doing things that she loved to do," Lourd wrote on Instagram in October 2019, where she celebrated what would have been Fisher's 63rd birthday by singing "one of her favorite songs in one of her favorite places."

Lourd — who played Lt. Connix in the Star Wars franchise — also played a major role in ensuring that The Rise of Skywalker paid homage to Fisher and her character, Princess Leia. "I purposely had written her character in scenes without Carrie, because I just didn’t want it to be uncomfortable for her," writer and director J.J. Abrams told Vanity Fair in May 2019 of re-working the Star Wars film around Fisher's death. However, Lourd explained that she wanted to see the story through alongside her mother. "I want to be in scenes with her," she reportedly told Abrams. "I want it for my children when I have kids. I want them to see."

More like this
'The Queen’s Gambit' Season 2 Tweet Wasn’t From Anya Taylor-Joy
By Mary Kate McGrath, Jack Irvin and Grace Wehniainen
The 'Scream 6' Trailer Shows Off Hayden Panettiere's Return & Ghostface In NYC
By Jack Irvin and Jake Viswanath
Netflix Shut Down 'Bridgerton' S3 Rumours About A “Very Dark” Storyline
By Bustle
Anne Hathaway Shared A "Thrilling" 'Princess Diaries 3' Update
By Darshita Goyal
Get Even More From Bustle — Sign Up For The Newsletter
From hair trends to relationship advice, our daily newsletter has everything you need to sound like a person who’s on TikTok, even if you aren’t.