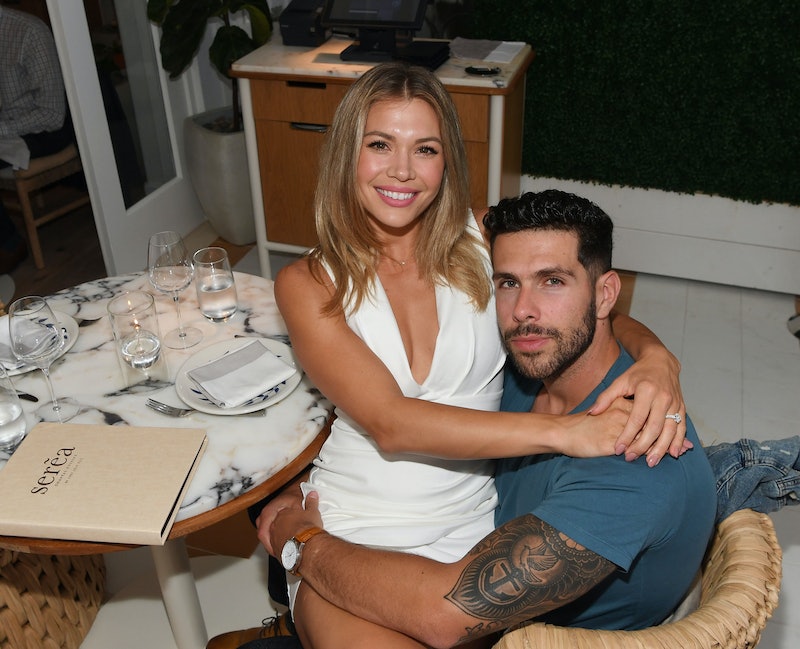 One more Bachelor fairy tale has officially come to an end. In a new interview with Us Weekly about the book he co-authored with Eric Bigger, Bachelor in Paradise alum Chris Randone revealed that Krystal Neilson has filed for divorce, and that she has "moved on" from their relationship, despite his hopes for a possible reconciliation. Chris was promoting his new book, Change Your Mindset, Change Your Energy, Change Your Life, when he was asked how he's holding up after his public split from the fitness coach.

"It’s becoming more real, the separation, which you know, is, you know, obviously turning into a divorce. Just got the paperwork, not too long ago," he explained. "It’s a crazy process, even though I’m still legally married, you know, it’s, it’s something that is a memory now." Randone, however, isn't bitter or mad, he added, saying, " I look at this as like a moment of gratitude and I know that’s probably crazy for anyone to hear this, but you know, you always got to come from a place of love and compassion. There are just things in life that you can’t control."

Chris and Krystal announced their split back in February, about eight months after they tied the knot in a ceremony that was aired on an episode of Bachelor in Paradise. And while the author has noted that he's "accepted" that Krystal has "moved on" from their relationship, Chris did admit that he was hoping for a possible reconciliation in the months after the breakup. "I definitely had a lot of crying moments during this pandemic," Chris — who wrote on Twitter in March that he "missed" Krystal — revealed. "But you know, what’s crazy is I think the pandemic helped me process the divorce."

"[It] legitimately helped me understand myself, helped me understand the pain, the grief,” he continued, later adding, "The only thing I could do was focus on me and my emotions. And so as time went by, like, I gained a different perspective. And so as much as I wanted to [reconcile] and the attempts that I made, at least I can move forward knowing that I did that."

In another interview with Us, Chris admitted that when he and Krystal first decided to separate, he didn't think it would be a permanent split. "I think it’s safe to say that I didn’t think that it would be the end," he revealed, adding that the public scrutiny and busy schedules that come with being on The Bachelor took a toll on his marriage. “The separation would allow us to focus on ourselves and continue to grow and get better, which it definitely happened for me and I’m truly thankful, but I do realize that sometimes all good things come to an end, right?"

Krystal — who competed on Arie Luyendyk Jr.'s season of The Bachelor — met Chris, a contestant on Becca Kufrin's season, on Season 5 of Bachelor in Paradise and the two got engaged on the beaches of Mexico in 2018. They were married in a romantic ceremony performed by Chris Harrison on June 16, 2019, and though they told reporters that they were looking forward to starting a family, the couple eventually announced their separation just eight months later.

"It hurts to announce that at this moment, we have mutually decided to separate. Never did we imagine this scenario, but we’ve come to a point where we both need to work on ourselves," the pair said in a joint statement at the time. "We are best friends that love and care for each other so deeply. We’ve appreciated everyone’s love and support so far throughout our journey and we just ask that you please respect our privacy as we navigate through this."