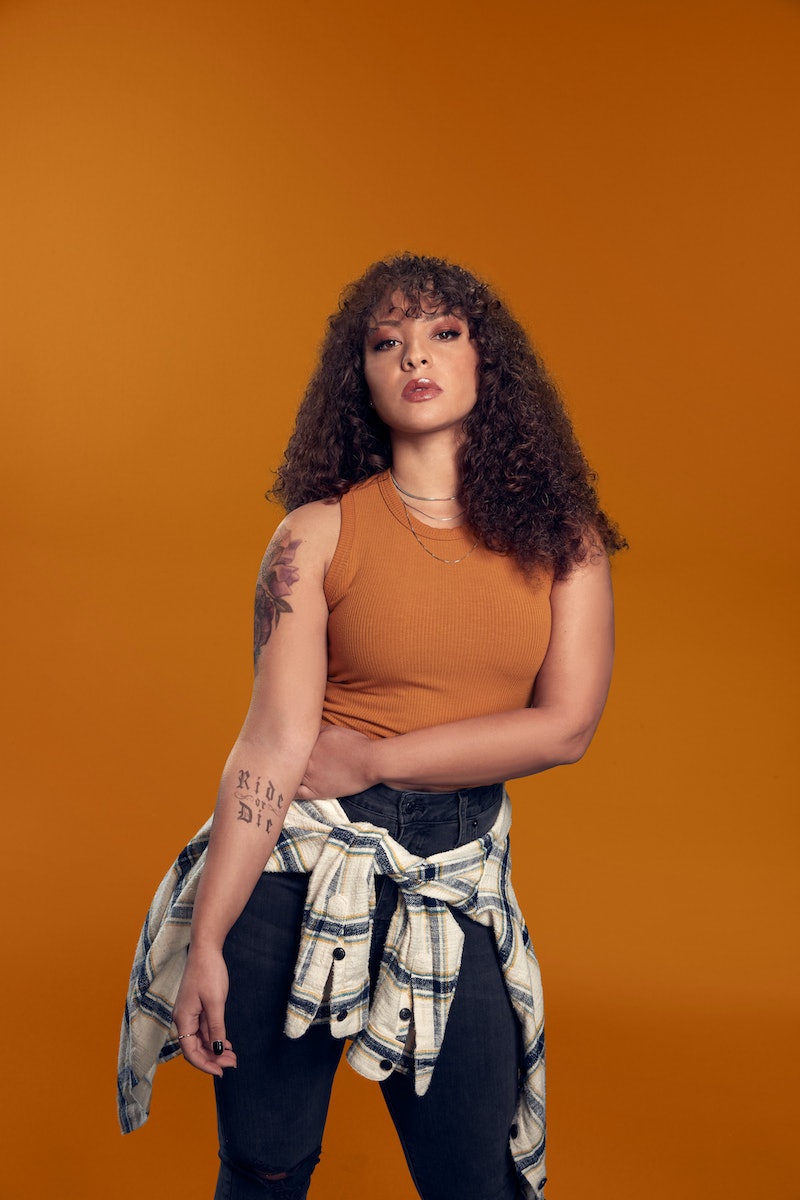 Everyone has a breaking point. For Ashley (Jasmine Cephas Jones), the protagonist of the new Starz series Blindspotting, it comes after a wealthy woman asks her where to find drugs mere hours after her boyfriend is sentenced to prison for possession. In response, she does what any reasonable person pushed to the edge would: she takes a tennis racket to every fragile item in the awful woman’s hotel room while screaming, “I hate the rich” in poetic verse. “It was very therapeutic,” Cephas Jones tells Bustle of the scene.

Premiering on June 13, Blindspotting is a continuation of the story that began in Daveed Diggs and Rafael Casal’s acclaimed 2018 indie film of the same name. The movie follows Oakland natives Collin (Diggs) and Miles (Casal) as they gallivant around their neighborhood in the final days of Collin’s parole. The TV spinoff focuses on Miles’ devoted girlfriend Ashley, opening in the chaotic moments after Miles is hauled off to jail for possession of MDMA (aka Molly). In the wake of his recklessness — an attribute viewers came to know and love about him in the film — Ashley must learn how to care for their son Sean (Atticus Woodward) as a single parent while living with Miles’ hippie mom Rainey (Helen Hunt) and intense younger sister Trish (Jaylen Barron).

In spite of everything, Ashley remains grounded, putting Sean first even when she’s barely holding on herself. “I think she represents so many women out there who feel like they have to do so much on their own, especially raising children,” Cephas Jones says. “At the beginning of the show ... Ashley feels like she has to do everything herself. But I think that by the end of the season, she realizes that [even though] this isn’t the perfect family ... it’s working.” Eventually, she “learns that she can let go and let other people lead a little bit.”

Running through the series are many of the core themes from the film: the ongoing gentrification of Oakland; the lack of resources afforded to working class people; and the cruelty of the criminal justice system, particularly toward people of color. But in the show, these issues are explored through the lens of the women in the community. Ashley offers a glimpse into the lives of the people left to pick up the pieces after a family member is swept into the legal system. “In a lot of stories, you see the prison system break families apart and we wanted to show the opposite of that,” Cephas Jones says. “We wanted to show a family and a couple that is not the perfect couple but loves each other so much and are so loyal to each other and want the best for each other and their son.”