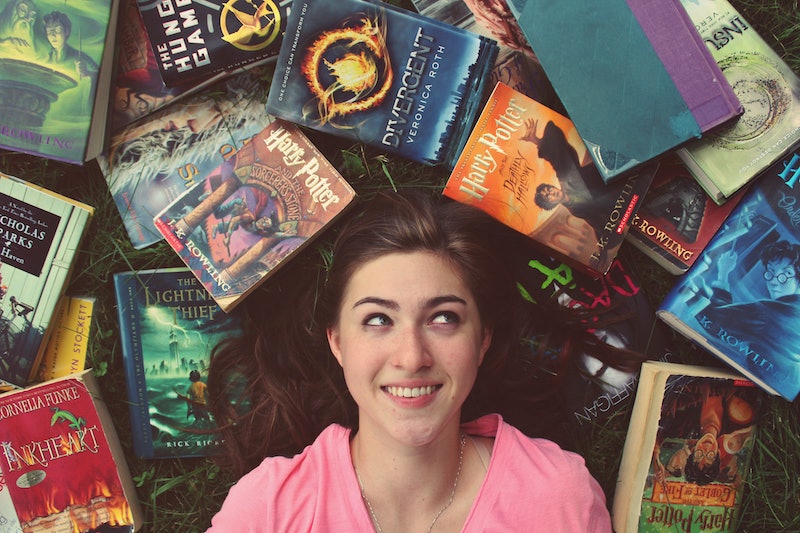 Depending on your current age, 35 may seem like a youthful midpoint or a scary, faraway number that makes you think of The Golden Girls. In reality, 35 is still young, and it’s a prime time to reassess priorities, double down on introspection, and celebrate all of the personal growth of the previous three decades. Believe it or not, all of that is possible.

For those who feel like they still don’t have everything — or anything — figured out, there are plenty of reads that speak to that stress, anxiety, and uncertainty. These 25 books, which span memoirs, contemporary fiction, romances, essays, and more, can add a little more assurance that everyone’s felt the exact same way at some point or another.

'I Feel Bad About My Neck' by Nora Ephron
Amazon

Nora Ephron’s hilarious, touching, and very honest book of essays discusses every strange and specific aspect of aging, from going through menopause and emptying the nest, to hair dyeing grays and (as the title suggests) dealing with a wrinkly neck. Unsurprisingly, the writer behind When Harry Met Sally, Sleepless in Seattle, You've Got Mail, and Bewitched gets to the heart of older womanhood.

Fey’s memoir has long been considered a modern classic. There’s a reason why her book continues to get the “must-read” label over a decade after publication: Her essays and advice about crying (or not) at work, female friendships, career, love, and breastfeeding are universal, and she delivers her life story with humor, vigor, and openness.

This National Book Award winner is one of the most important books of the last century. It’s a tale about an unnamed Black man struggling to find a place in the world, and its themes of feeling lost, finding direction, and trying to carve out a place in the world are all common 30-something anxieties.

What do Serena Williams, Kim Kardashian, and Hillary Clinton have in common? On the surface, the answer might be not much, but culture writing extraordinaire Anne Helen Petersen makes the argument that they’re all part of a cabal of women who’ve succeeded despite — and also perhaps because of — their unruliness.

Newly minted astronomy PhD graduate Grace Porter is on the cusp of 30 and couldn’t feel more lost: She’s unemployed, dealing with increasing anxiety, handling microaggressions in her field, and juggling a difficult relationship with her dad. So, she does what any bewildered Millennial would: She marries a stranger in Vegas. But when she wakes up in the morning and realizes that wedding the mysterious Yuki Yamamoto hasn’t solved any of her problems, Grace goes on a journey of self-discovery filled with ups, downs, and plenty of astrological ruminations.

Slouching Towards Bethlehem by Joan Didion

Didion is one of the best writers of her (or any) generation. She mixes the personal and the political, the intimate and the sensational, and the results are always stunning. Her 1968 essay collection Slouching Towards Bethlehem is no different. These stories on her upbringing in California and her coming-of-age during a time of so much social upheaval are timeless, like all of her work.

Beauvoir’s 1949 manifesto about women’s role in society was way ahead of its time, to put it mildly. Feminism was on some women’s (and a few men’s) minds, but the movement was definitely not where it is today. Still, The Second Sex is a powerful look at sexuality, identity, and independence — all topics that are top of mind for every generation.

Fajardo-Anstine’s 2019 book Sabrina & Corina may be short at just 224 pages, but it packs a punch as she traces the struggles and joys of Latinas and Indigenous women in the American West. Her stories blend together sisterhood, generational trauma, the complexities of mother-daughter relationships, the stress that builds when coming of age, and so much more.

How to Do Nothing by Jenny Odell

'How to Do Nothing' by Jenny Odell
Green Bean Books

Despite the irony of reading a book called How to Do Nothing, author, artist, and educator Jenny Odell has a point: We live in a society full of technology, constant distractions, and nonstop #content and have completely forgotten how to just be. Are Millennials too far gone to be saved from themselves and their smartphones? Odell has endless thoughts on the subject.

Any work by Roxane Gay is considered a must-read at this point, but Gay’s essays in her beloved book Bad Feminist cover everything from the color pink to Sweet Valley High. She’s funny, sharp, and relatable, and the questions the book raises provide more than enough fodder for what feminism looks like as the times change.

Maybe in Another Life by Taylor Jenkins Reid

In Taylor Jenkins Reid’s earlier novel Maybe in Another Life, 29-year-old Hannah returns to Los Angeles after many years away and heads to a bar to celebrate her move with a few friends. At the end of the evening, she’s at a crossroads: She can either call it a night and head home, or she stay out with her former flame Ethan. Told in chapters that alternate between the two timelines that emerge, Jenkins Reid asks the question of how one seemingly insignificant choice creates a ripple effect of repercussions.

'Big Friendship: How We Keep Each Other Close' by Aminatou Sow and Ann Friedman
Amazon

Why does our society prioritize every other kind of relationship above friendship, despite the fact that it’s a foundational part of so many people’s lives? Writers, podcasters, and cultural commentators Aminatou Sow and Ann Friedman sought to find out. Using the trajectory of their own Big Friendship as the backdrop and armed with plenty of research, the duo explore what it means to be a friend — and also when to know if it’s time to walk away.

Recently widowed Evvie Drake has lived her life mostly on pause since the death of her husband a year prior, never talking about her grief or the difficult marriage she endured behind its shiny veneer. But after former professional baseball player Dean Tenney comes to town and moves into Evvie’s spare apartment , the two strike up an odd friendship, and Evvie’s finally forced to confront her past. Can these two work through their issues to come together, or will they strike out?

Mistakes I Made at Work by Jessica Bacal

'Mistakes I Made at Work' edited by Jessica Bacal
Amazon

In Mistakes I Made at Work, Jessica Bacal interviews 25 successful women about their biggest screw-ups. Cheryl Strayed, Kim Gordon, and Jezebel founding editor Anna Holmes all reveal their most embarrassing and ridiculous professional moments, reminding all of us that we’re not alone and that there’s more to life than what happens at the office.

In Five Years by Rebecca Serle

'In Five Years' by Rebecca Serle

Dannie Kohan is an attorney who’s checked every box. She’s got her dream job, the perfect boyfriend, and the ultimate New York City apartment. But one night Dannie goes to sleep and wakes up five years into the future — and realizes nothing about that world resembles her present life. After spending an hour in this strange new universe before returning to her old life, Dannie becomes hellbent on changing her fate. But how much control does she really have over destiny?

How to Fail at Flirting by Denise Williams

'How to Fail at Flirting' by Denise Williams
The Lit. Bar

After 30-something college professor Naya finds out that her job is in jeopardy and her abusive ex might have something to do with it, she decides to step outside of her comfort zone one night to unwind and meets a charming, handsome stranger named Jake in the process. Soon she finds herself on the cusp of something serious with Jake, but she wonders if she’s really ready to step outside of her comfort zone and try something new.

'Less' by Andrew Sean Greer
Word on the Street Bookshop

Andrew Sean Greer’s Pulitzer Prize-winning novel may be centered of a 50-year-old man, but it’s as relevant as ever to 30-somethings. Floundering writer Arthur Less receives a wedding invitation from his former boyfriend of nine years, so he does something entirely sensical: He flees on a worldwide excursion to avoid the nuptials. Despite his best efforts, he soon discovers during a globe-traversing trip to Mexico, Morocco, India, and beyond that he can’t quite run away from his feelings — or his ex.

You Me Everything by Catherine Isaac

'You Me Everything' by Catherine Isaac
Amazon

After dealing with a sick parenting and receiving devastating personal news, 30-something Jess decides to spend the summer with her 10-year-old son William and his father, her former boyfriend Adam, at a French chateau he owns. But as the two exes begin slowing unpacking their past in the present, Jess realizes she needs to make more than a few important decisions about her future.

Actress Gabrielle Union passionately breaks down her own coming of age in her memoir We’re Going to Need More Wine, where she tackles everything from petty high school drama to becoming an outspoken activist for racial equality, feminism, and an end to sexual violence. One thing’s for sure: This wasn’t the path Union saw herself taking.

The Bookish Life of Nina Hill by Abbi Waxman

Bookstore employee Nina Hill’s life is neat and tidy as can be: She writes in her planner every day, goes to work, and partakes in regular games of trivia. But after she learns that she has a family she never knew existed and her trivia enemy begins flirting with her, Nina has to decide if she wants to stay within the confines of her perfectly planned but predictable life or take a leap of faith.

We Have Always Been Here by Samra Habib

'We Have Always Been Here' by Samra Habib
Amazon

No member of the LGBTQ+ community has a linear coming out story, and Samra Habib’s is especially winding. After coming to Canada with her family as Pakistani refugees, Habib overcomes xenophobia, an arranged marriage, and poverty on her path to self-discovery and reclamation of her queerness.

Written as a long-form letter to her two young daughters, comedian Ali Wong doesn’t hold back in her memoir Dear Girls, where she recounts hairy body parts, gory births, bad sex, and everything in between. There’s sweetness in between the baudy jokes and biting remarks, however, as Wong reminisces on the mistakes of her teens, twenties, and early thirties.

If I Never Met You by Mhairi McFarlane

'If I Never Met You' by Mhairi McFarlane
Amazon

Thirty-six-year-old attorney Laurie is left reeling after her partner of 18 years dumps her seemingly out of the blue. Her situation is made only more dire by the fact that she and her ex work in the same office and his new girlfriend is pregnant. Determined to take matters into her own hands, Laurie strikes a deal with office playboy Jamie to start a fake relationship online and get her gossipy co-workers off of her back. But after a certain point, it becomes obvious to both Laurie and Jamie that they’re not just doing it for the ‘gram.

Maybe You Should Talk to Someone by Lori Gottlieb

'Maybe You Should Talk To Someone' by Lori Gottlieb
Amazon

One would think a therapist would have it all together, but when shrink Lori Gottlieb’s long-term boyfriend dumps her seemingly out of the blue, the ordeal launches her into a period of self-discovery with the help of a new therapist, Wendell. Interwoven with chapters detailing her dealings with four of her own patients, Gottlieb’s book reassures us that maybe we all should, in fact, talk to someone.