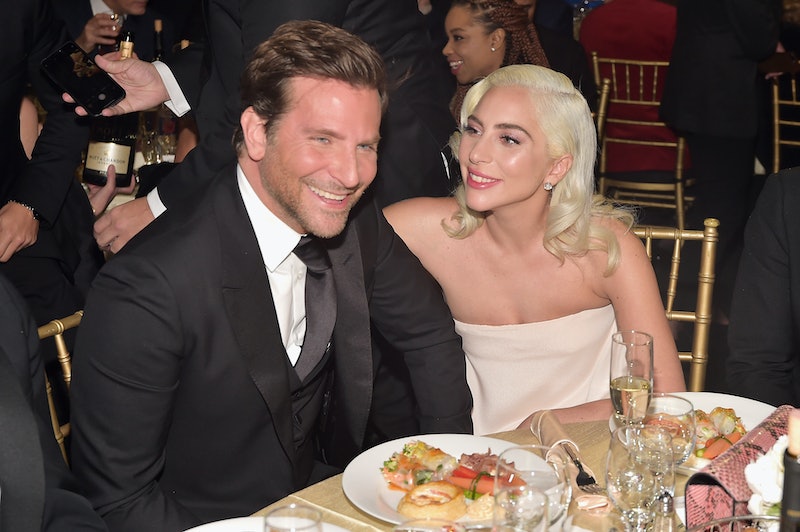 Four years after starring alongside Lady Gaga in the 2018 remake of A Star Is Born, Bradley Cooper finally addressed those pesky relationship rumors. One year after the film came out, the romance rumors reached an all-time high when the co-stars performed “Shallow” together at the Oscars. At the time, the duo didn’t address the rampant speculation. But now, Cooper has confirmed what literally no one wanted to be true: they were just friends all along.

In a new interview with The Hollywood Reporter, the Hangover star gushed over the “Rain on Me” singer, calling her “so terribly charismatic and beautiful” and complimenting her commitment level. But much like their performance as a famous and deeply in-love couple in the movie, Cooper said that their intimate duet at the Academy Awards was merely part of the act. Not to mention, getting into character helped calm his fear of singing in front of a live audience.

“Just from a personal standpoint, it reduces the anxiety level,” Cooper said, adding that it would’ve been strange if they performed the song without cuddling on the piano bench and staring longingly into each other’s eyes. “They kind of fall in love in that scene in the film. It’s that explosive moment that happens to happen to them on a stage in front of thousands of people. … It would have been so weird if we were both on stools facing the audience.”

Despite the speculation, the duo has clearly moved on. Cooper recently sparked reconciliation rumors with his ex-girlfriend and the mother of his daughter, model Irina Shayk. Gaga, for her part, has been dating businessman and investor Michael Polansky for more than two years. According to Entertainment Tonight, “Michael is her North star.” “[He] loves Lady Gaga, but he’s in love with Stefani,” the insider said, referring to her legal name. “He loves the theatrics and her artistry, but he is very happy being out of the spotlight and letting her shine.”

Gaga and Polansky were first spotted together on New Year’s Eve in 2019, and the pop star officially confirmed their romance on Instagram the following February. “We had so much fun in Miami,” she wrote alongside a photo of her sitting on her man’s lap. “Love to all my little monsters and fans, you’re the best!” Since then, she’s shared snippets of their relationship on social media, including a post celebrating Valentine’s Day and a photo of them kissing through their masks at Joe Biden’s inauguration.

It’s been a while since Gaga shared a photo with her beau, but that’s probably because she spent much of the last year working. In addition to releasing her second and final album with Tony Bennett called Love For Sale, she’s been abroad in Italy filming House of Gucci. In the movie, which is due out on Nov. 24, Gaga plays Italian socialite Patrizia Reggiani who hires a hitman to kill her husband Maurizio Gucci (Adam Driver) after he leaves her for a younger woman.

Gaga can’t currently relate to Patrizia and Maurizio’s toxic relationship, but she told The Hollywood Reporter that she channeled her past trauma for the performance. The singer has been very vocal in the past about struggling from PTSD after being raped by a music producer who was twice her age when she was 19 years old. She said, “I took the pain I feel from being attacked when I was a young girl, from feeling left behind by people that I love, from feeling trapped that I can’t go out into a world that I love. I took that pain and I gave it to her.”

More like this
Hilary Duff's Husband Matthew Koma Has Her Name Tattooed On His Butt
By Jake Viswanath and Stephanie Downs
Who Is "Daddy" Pedro Pascal Dating? People Are Thirsting Over The 'Last Of Us' Star
By Alyssa Lapid
Vanessa Hudgens Is Reportedly Engaged To Cole Tucker
By Jake Viswanath
RHOP’s Robyn Dixon Explained Why Juan Paid For Another Woman's Hotel Room
By Brad Witter
Get Even More From Bustle — Sign Up For The Newsletter
From hair trends to relationship advice, our daily newsletter has everything you need to sound like a person who’s on TikTok, even if you aren’t.