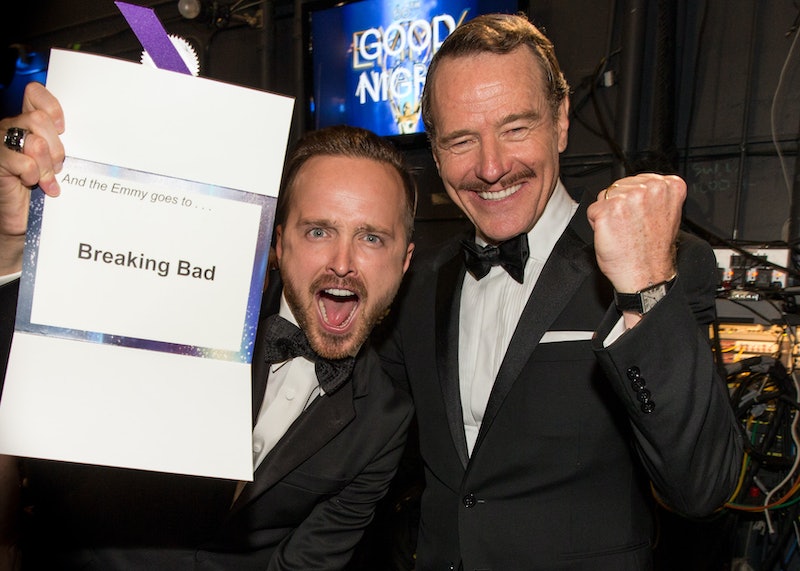 Walter White and Jesse Pinkman are up to no good — again. Breaking Bad stars Bryan Cranston and Aaron Paul have reunited for a 2023 Super Bowl commercial that revives their characters from the 16-time Emmy-winning AMC series. On Jan. 19, Entertainment Weekly confirmed that Paul would join Cranston in an ad for PopCorners, and the snack brand’s new teaser for the commercial leaves open the possibility that another cast member could potentially join them.

In the nostalgic teaser, Paul is seen watching the scenic desert sunset after an obvious cooking session while munching on PopCorners chips. The camera then pans out to reveal an empty lawn chair next to him and the trailer that doubled as their meth lab, as Paul gets a mysterious phone call. “Hey, what’s up?” he answers.

This ad marks the third time the characters will reunite onscreen since the show ended in 2013, following their flashback scene together in the Breaking Bad sequel movie El Camino in 2019 and their cameos in Better Call Saul’s Season 6’s eleventh episode titled “Breaking Bad” in 2022.

While Paul’s partner-in-crime doesn’t appear in the teaser, Cranston already confirmed his participation in December, when PopCorners announced they would be heading to Walt and Jesse’s stomping grounds of Albuquerque for their Super Bowl ad. The actor shared a photoshopped snapshot of Walt clutching some chips in the desert, captioning the tweet, “Breaking soon.”

Most recently, the duo was spotted sitting courtside at a Houston Rockets game on Jan. 18, just hours before the teaser for their new ad was revealed.

Paul and Cranston also run a business together, launching Dos Hombres mezcal in 2019 and continuing to put in long hours to expand the brand. “It’s important for Bryan and I, as founders of this company, that [our business partners] know that we are doing the work,” Paul told CNBC in June 2022. “We don’t want to just slap our names on something and let other people do the work. This is our baby, and we’re incredibly proud of our baby.”

The full commercial will air during Super Bowl LVII on Feb. 12, though it’s unknown whether their reunion will air before or after the the halftime show, which Rihanna is set to headline.

More like this
The 2023 Super Bowl Commercials Feature A 'Breaking Bad' Reunion & Missy Elliott
By Alyssa Lapid
Alicia Silverstone Revives Her 'Clueless' Character In This Super Bowl Commercial
By Jake Viswanath
Ashton Kutcher Wants Danny Masterson “To Be Found Innocent” In Rape Retrial
By Jake Viswanath
At 28, Debra Jo Rupp Was Living A Much Different '70s Show
By Grace Wehniainen
Get Even More From Bustle — Sign Up For The Newsletter
From hair trends to relationship advice, our daily newsletter has everything you need to sound like a person who’s on TikTok, even if you aren’t.