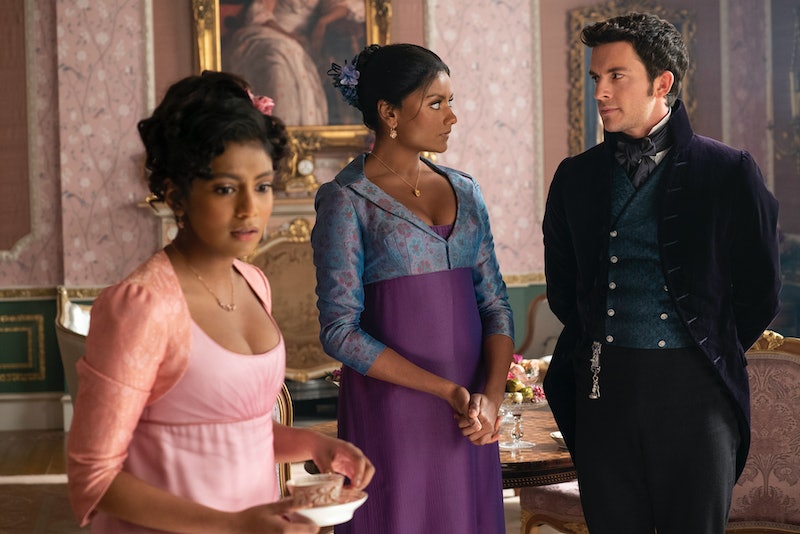 A still from 'Bridgerton' Season 2.

Each of the eight books in the main Bridgerton series follows one of Lady Violet and the late Lord Bridgerton’s eight children as they search for a spouse. The first installment, The Duke and I, centers on eldest daughter Daphne and the dashing Duke of Hastings, and it formed the basis for Bridgerton Season 1. In book two, The Viscount Who Loved Me, readers learn about Anthony — the eldest Bridgerton son, who inherited his deceased father’s title when he was just 18 years old — and his pursuit of Edwina Sheffield. She’s the Diamond of the First Water, which naturally means she’s the perfect woman to give Anthony an heir, but her infuriating stepsister, Katharine, keeps getting in the young Lord Bridgerton’s way.

As you might expect, things are a little bit different in the Netflix version, however. Here are the major differences between Bridgerton Season 2 and The Viscount Who Loved Me.

The Sheffields Are Now The Sharmas

In the Shondaland version of The Viscount Who Loved Me, the Sheffields are also reimagined as the Sharmas, a family with ties to India. The events kick off after the widowed Lady Mary Sharma (Shelley Conn) returns from India with her two daughters, Edwina (Charithra Chandran) and Kate (Simone Ashley) — roughly 20 years after she left London to marry a man of low birth, against the wishes of her parents and Queen Charlotte. Elder daughter Kate, who’s technically Lady Mary’s stepdaughter, has chosen to delay her own search for a husband in order to help her beloved kid sister, Edwina, make her match — a move that could help get the family back into Lady Mary’s parents’ good graces.

The Bee Sting Scene Plays Out Much Differently

Fans of Quinn’s novels know that the Bridgerton family’s patriarch, Edmund, died tragically from an allergic reaction to a bee sting at age 38... right in front of the then-18-year-old Anthony. As a result, in The Viscount Who Loved Me, Anthony Bridgerton, now age 30, cannot fathom a world in which he lives to be older than his father. Believing he will die young, and having seen how his mother mourned for her husband, Anthony resolves never to fall in love. Marriage is, for him, a practical matter. He just needs a young woman attractive, healthy, and smart enough to give birth to an attractive, healthy, and smart Bridgerton heir.

You can imagine Anthony’s panic when, after Kate finally gives him her approval to marry Edwina, she’s stung on the chest by a bee. Sure, Kate’s been the bee in Anthony’s proverbial bonnet up to that point, but everyone else can see that their bickering is as flirtatious as it is vexing. And he wouldn’t be a gentleman at all if he let a young woman die without trying to save her, right?

And so, Anthony Bridgerton does the only thing he can do to save Kate: he sucks the bee venom right out of her chest. Unfortunately, Anthony’s gallant — and ultimately unnecessary — act lands both of them in hot water when three people — Lady Violet, Lady Mary, and Lady Danbury — see them locked in what appears to be a passionate embrace. Anthony’s plans to marry Edwina are cut short, because he’s forced to marry Kate instead, in the name of honor and duty.

Bridgerton Season 2 takes more than a few liberties with the novel’s infamous bee sting scene. Kate still sustains a bee sting in the Netflix Original Series, but Anthony does not suck out the venom. Instead, he panics, and Kate must convince him that she is not going into anaphylactic shock. Anthony does touch her chest, laying his hand over her heart, but aside from that intimate touch — and some intense, prolonged eye contact — nothing scandalous happens in the garden.

If that’s the case, then how does Anthony wind up marrying Kate in the show? It takes a lot longer. While the central tension in The Viscount Who Loved Me revolves around Anthony’s inability to admit that he loves his wife, Bridgerton Season 2 opts to draw out their journey to the altar.

In the Shondaland show, Edwina makes it all the way to her wedding day before she breaks her engagement with Anthony... in front of Queen Charlotte herself. To make matters worse, everyone sees the way Anthony and Kate look at one another, leaving no doubt in anyone’s mind as to which Sharma the young viscount should marry. From there, it takes a lot of frustrated wooing on Anthony’s part to convince Kate to stay in England to marry him, rather than return to India to save face.

The Carriage Accident Doesn’t Happen, But Kate Still Gets Hurt

In The Viscount Who Loved Me, Anthony waits to tell Kate that he loves her until it’s almost too late. He finds her carriage on the road, just in time to see it turn over, with Kate, Edwina, and their dog, Newton, inside. Anthony confesses his reasons for remaining so distant and all is well, even though Kate suffers a broken leg.

The TV version is a lot more dramatic. Here, Kate and Anthony share a night of passion before her planned trip back to India. He calls on her the next day, intending to propose, but finds that Kate has absconded with one of Lady Danbury’s horses. Anthony chases after her, but she’s thrown from her horse and sustains a head injury, which leaves her unconscious for several days. Blaming himself for Kate’s predicament, Anthony keeps away from the Sharmas yet again, amping up the will-they-or-won’t-they drama.

Penelope’s Storyline Gets Pushed Up

Indeed, this season borrows some plot elements from the later novel Romancing Mister Bridgerton. Although many of the details have been altered, readers will find Colin’s unintentional insulting of Penelope, the search for Lady Whistledown’s identity, and Penelope’s rash actions when the wrong person is believed to be Whistledown all included in Bridgerton Season 2.

More like this
Netflix Shut Down 'Bridgerton' S3 Rumours About A “Very Dark” Storyline
By Bustle
'Wednesday' Star Emma Myers Thinks A Wenclair Storyline Is “Possible” In Season 2
By Alyssa Lapid
The 'Freeridge' Cast Shared Their Hopes For A Potential Season 2
By Grace Wehniainen
'The Crown' Season 6 Has Suspended Filming "Out Of Respect" For The Queen's Death
By Bustle Staff
Get Even More From Bustle — Sign Up For The Newsletter
From hair trends to relationship advice, our daily newsletter has everything you need to sound like a person who’s on TikTok, even if you aren’t.