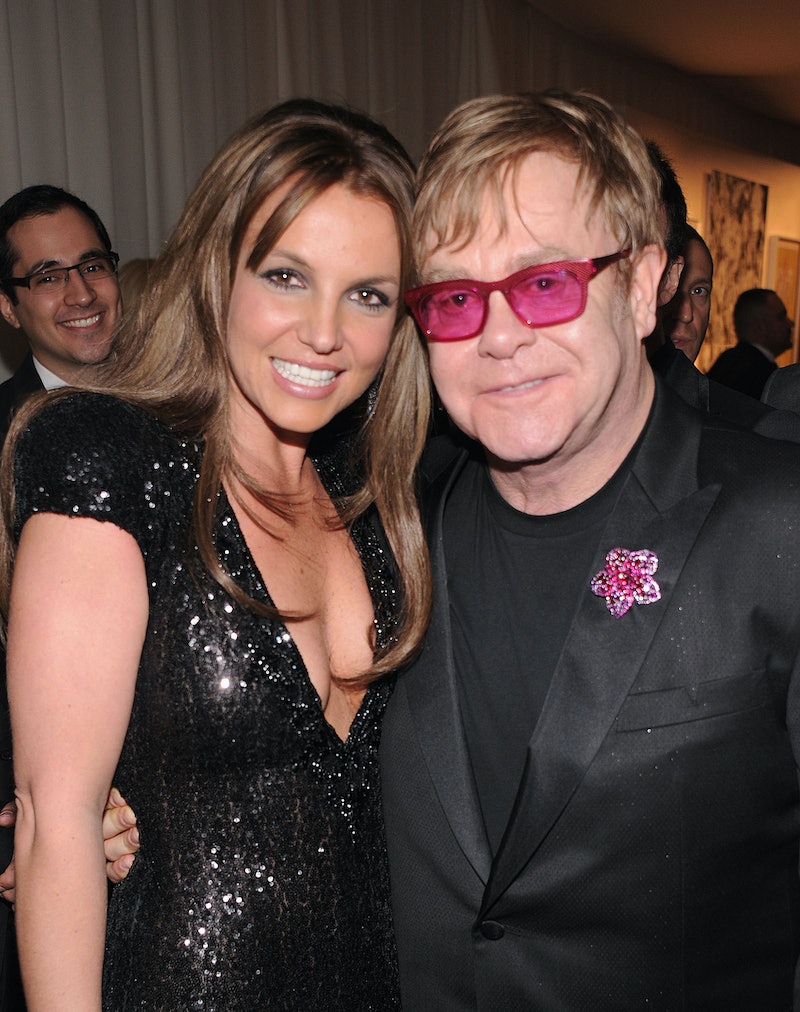 First Dua Lipa, now Britney Spears: the musical legend Elton John is back in the studio with another contemporary star. After “Cold Heart” ran the musical charts in 2021, John is now working with the pop queen herself with what an industry insider is calling “the song of the summer.” Page Six reported that Britney would be working with Elton John on a re-recording of his hit 1971 song “Tiny Dancer,” which will be released by Universal Music next month, though an exact release date has not been announced. If his collab with Dua Lipa is any indication, the remixed version will likely be a fresh take on the classic.

According to sources within the music industry, John approached Britney for the recording. “This was Elton’s idea, and Britney is a huge fan. They have recorded a remix of ‘Tiny Dancer’ as a full duet — and it is incredible,” the insider said. “Britney was in the studio in Beverly Hills last week with Elton for the super-secret recording session overseen by uber-producer Andrew Watt.”

Watt won the 2021 Grammy Award for Producer of the Year and has worked with the hottest musical acts in every era, from Pearl Jam and Ozzy Osbourne to Justin Bieber and Miley Cyrus. “They’ve already played it for people at their record label, and everybody is freaking out. It is so good,” the source continued. “They are saying this is going to be the song of the summer. Britney is officially back. She’s back to work, and she’s super excited.”

A source also told People that Britney has been “talking a lot about her career,” saying she “loves creating music and wants to give her fans a new album. It seems like she is focusing on one thing at a time.” In the wake of her conservatorship’s termination, it seems like now is the perfect time for the pop icon to make her long-awaited comeback — and she’s cashing in on the excitement for her return to pop music. The music industry insider told Page Six that she received a “record-breaking deal” from Universal Music for the recording.

It’s been six years since Britney has released new music (2016’s Glory was the last studio album from her), and the singer has been teasing her return to music on her Instagram page. On July 15, she posted a moody a 'Capella version of her first single “...Baby One More Time,” sharing that she hadn’t shared her voice in “an extremely long time ... maybe too long.” Her caption goes on to explain that she had been wanting to rerecord the song for 14 years, but was told “no” by her team, which included her immediate family. The conservatorship also restricted her ability to make the decision for herself.

Fans in the comments clamored behind Britney, and Bachelorette star Kaitlyn Bristowe even requested that she go the Taylor Swift route and rerecord all of her albums. While there’s no sign of ...Baby One More Time (Britney’s Version) just yet, we’ll be waiting for her rendition of “Tiny Dancer” with open arms.