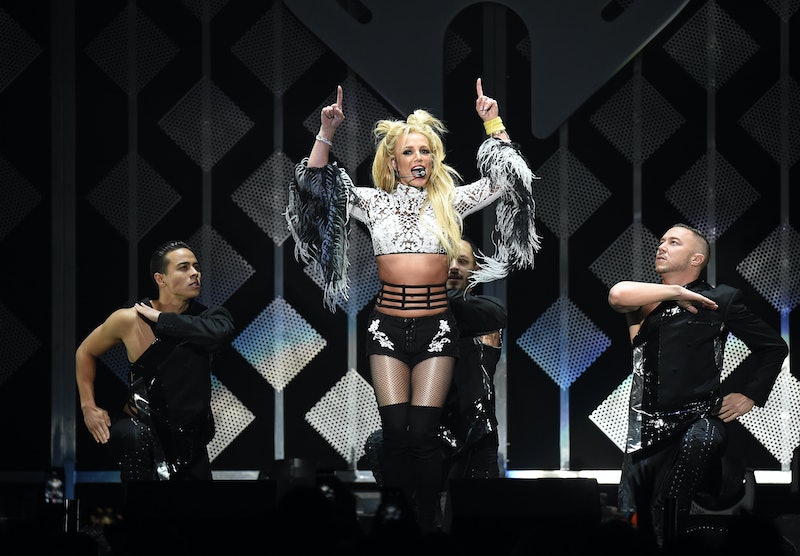 Now that Britney Spears is free from her 13-year-long conservatorship, all fans want is to see her being happy, creating music, and performing onstage again — on her own terms. While the singer has previously expressed hesitation about returning to the music industry, it seems like she just might be making her music comeback sooner than expected. Spears posted one of her infamous dance videos on Instagram on Feb. 9, teasing in her caption that something new was coming.

The video features Spears wearing a red bodysuit and dancing to her 2007 Blackout deep cut “Get Naked (I Got A Plan)” in an empty studio. Unlike her other dance videos, this one shows her dancing to her own music in a spot seemingly away from home, which could allude to her rehearsing for something major. “This is 13 seconds of me in heels before I dyed my hair purple …. This is a tease of what’s to come !!!!” she captioned the post, without going into detail. “Hope you guys are having a great day !!!!! Pss No hair and make up !!! Just PLAYING around folks !!!!”

READ NEXT: What Is Britney Spears’ Net Worth?

Given Spears’ penchant for posting Instagram photo shoots and dance videos as a way of staying creative, like the intriguing Project Rose, this could be her simply teasing more DIY content for fans. However, this isn’t the first time that Spears has alluded to something music-related.

In December 2021, Spears posted a video of her belting out some vocal runs in her mirror and reminding fans of her talent. “I just realized this today guys … after what my family tried to do to me three years ago … I needed to be my own cheerleader,” she wrote, before going on to list her many accomplishments, including her nine studio albums and four-year Las Vegas residency. She ended her since-deleted caption by announcing a new song was coming. “Pssss new song in the works … I’m gonna let you know what I mean !!!!!” she wrote.

Additionally, Instagram gossip account DeuxMoi has received anonymous tips stating that Spears has reached out to songwriters about making some new music together. While the singer has yet to confirm this, and DeuxMoi posts should always be taken with a grain of salt, it sounds like whatever Spears is planning in the music world may not be as far away as we once thought.