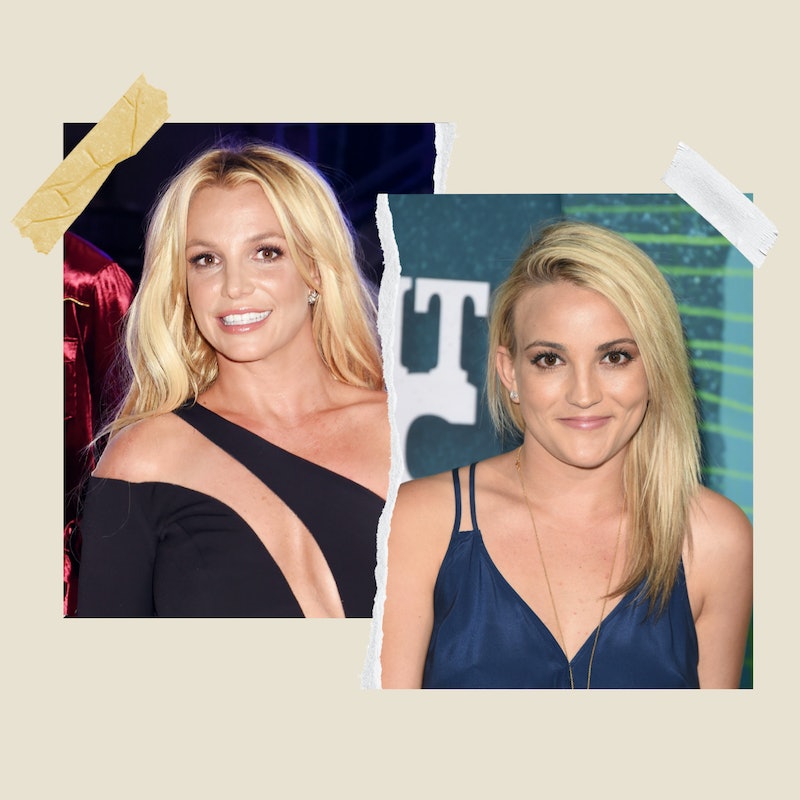 Tensions remain high between Britney and Jamie Lynn Spears. Shortly after the “Toxic” singer blasted her loved ones for not supporting her through her conservatorship battle, Jamie Lynn took to Instagram with a subtle message for the pop star on Sunday, July 18. “May the peace of the Lord be with you, and your spirit,” the former Nickelodeon star wrote alongside a photo of her in a red dress. Britney was far less subtle in return, throwing shade at her younger sister by mimicking her words in the caption of one of her infamous dancing videos.

“May the Lord wrap your mean ass up in joy today,” Britney captioned a clip of herself twirling to Billie Eilish’s “Bad Guy.” Elsewhere in the caption, the pop star hinted at Jamie Lynn’s red dress and encouraged her haters not to watch the video. “If you don’t like it ... don’t watch it,” she wrote. Shortly after, Jamie Lynn went back and changed the caption of her own post, opting to keep things simple with peace sign and red heart emojis instead.

Britney and Jamie Lynn’s heated social media exchange came one day after the pop star called out the Zoey 101 actor in a separate post with text that read: “Take me as I am or kiss my ass eat sh*t and step on Legos.” The singer explained in the caption that her 13-year conservatorship “hurt [her] deeply” and that she wouldn’t be performing “anytime soon” with her dad controlling so much of her life. She then slammed Jamie Lynn for performing remixes of her songs at the 2017 Radio Disney Music Awards.

“I don’t like that my sister showed up at an awards show and performed MY SONGS to remixes,” Spears wrote, adding that the conservatorship “killed” her dreams. This wasn’t the first time she called out her family in recent weeks, either. On July 16, Spears slammed her loved ones for not being there when she needed them most. “There’s nothing worse than when the people closest to you who never showed up for you post things in regard to your situation whatever it may be and speak righteously for support,” she wrote on Instagram.

Spears was likely referring to Jamie Lynn, who put out several supportive statements since the pop star’s court hearing on June 23. “I think it’s extremely clear that since the day I was born I’ve only loved and adored and supported my sister,” she said on her Instagram Stories shortly after Britney’s testimony. “I mean, this is my freaking big sister before any of this bullshit ... I’m so proud of her for using her voice. I am so proud of her for requesting new counsel.”

Jamie Lynn wasn’t the only one rallying behind Britney after the hearing; the rest of the world was, too. The music icon received widespread support for speaking out against her conservatorship last month, and since speaking her truth, the estate’s co-conservator Bessemer Trust, longtime manager Larry Rudolph, and court-appointed attorney Sam Ingham III have all resigned from their positions. On July 14, Judge Brenda Penny approved Spears’ request to hire her own lawyer.

Although an unnamed source told Us Weekly that “Jamie Lynn is 100 percent for #FreeBritney,” the pop star clearly feels that her sister’s support is too little, too late. “How dare the people you love the most say anything at all,” the “Oops!...I Did It Again” singer wrote on July 16. “Did they even put a hand out to even lift me up at the TIME !!!??? How dare you make it public that NOW you CARE … did you put your hand out when I was drowning ???? Again … NO.”