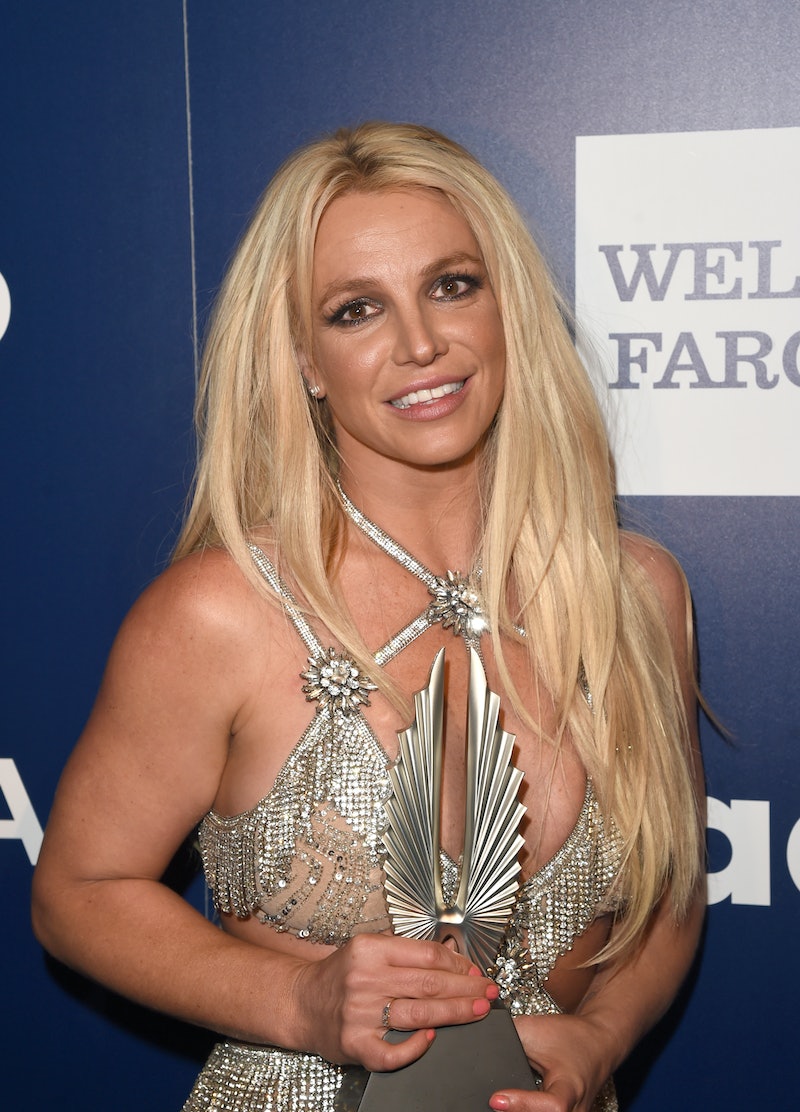 Britney Spears has been on an indefinite work hiatus since 2019 and throughout her highly publicized conservatorship battle. Last year, she told Los Angeles Superior Court Judge Brenda Penny via her former lawyer, Samuel Ingham III, that she refuses to perform again until her father, Jamie Spears, is removed as her conservator. But following Penny’s official suspension of Spears’ father from her conservatorship on Sept. 29, it seems the princess of pop is already working on a new creative project — and no, it’s not an album. On Oct. 9, Spears announced via Instagram that she’s in the process of writing a novel.

Alongside a photo of a hand emerging from a body of water and holding a pen, Spears wrote the caption: “I’m writing a book about a girl who was murdered ... yet her ghost gets stuck in limbo because of trauma and pain and she doesn’t know how to cross over to the world she used to know!!!!” She continued, “After being stuck in limbo for three years, she is a ghost who thrives off of her reflection in the mirror for existence. She has no one she can trust but something happens and she figures out how to cross over to the world where her family is!!!!”

She then provided her over 35.3 million Instagram followers with more plot details. “Coming out of the limbo she has a decision to make... Greet the same people who murdered her or create a new life!!!! She no longer needs her mirror,” she wrote. “She found a portal by citing certain prayers constantly that give her the insight and gift to not be scared anymore and come out of limbo... But what I will leave to the IMAGINATION is what she does when she crosses over... besides learning to write her name again!!!!”

While Spears didn’t share any details regarding the inspiration behind the book’s plot, the protagonist’s “limbo” seems like somewhat of a metaphor for the 39-year-old singer’s own experiences. In her bombshell June 23 testimony, Spears described her conservatorship as “abusive” and said she’s both “traumatized” and “angry.” “I’ve lied and told the whole world ‘I’m okay. And I’m happy,’” she told Penny. “But now I’m telling you the truth. Okay? I’m not happy. I can’t sleep. I’m so angry. It’s insane. And I’m depressed. I cry every day.” Her next hearing, which could address terminating the conservatorship altogether, is currently set for Nov. 12.

Whether or not the “Toxic” icon’s book will see the light of day is to be determined, as she hasn’t announced a publishing deal. However, fans are ready to read it. “This sounds so good,” commented Years & Years’ Olly Alexander, while pop star Betty Who wrote, “Would buy this book.” Additionally, one fan made a tongue-in-cheek comparison between the Spears and Romeo & Juliet author William Shakespeare, writing, “Britney Shakespears.” Another fan commented, “Sounds like a best seller.”

More like this
Britney Spears Shared The Real Reason She Shut Down Her Instagram Account
By Brad Witter
Olivia Rodrigo Manifested Finally Meeting Demi Lovato
By Jake Viswanath
Taylor Lautner Thought Taylor Swift's 2009 VMAs Interruption Was A "Skit"
By Alyssa Lapid
The Jonas Brothers' New Album Has A Very Meta Name
By Alyssa Lapid
Get Even More From Bustle — Sign Up For The Newsletter
From hair trends to relationship advice, our daily newsletter has everything you need to sound like a person who’s on TikTok, even if you aren’t.