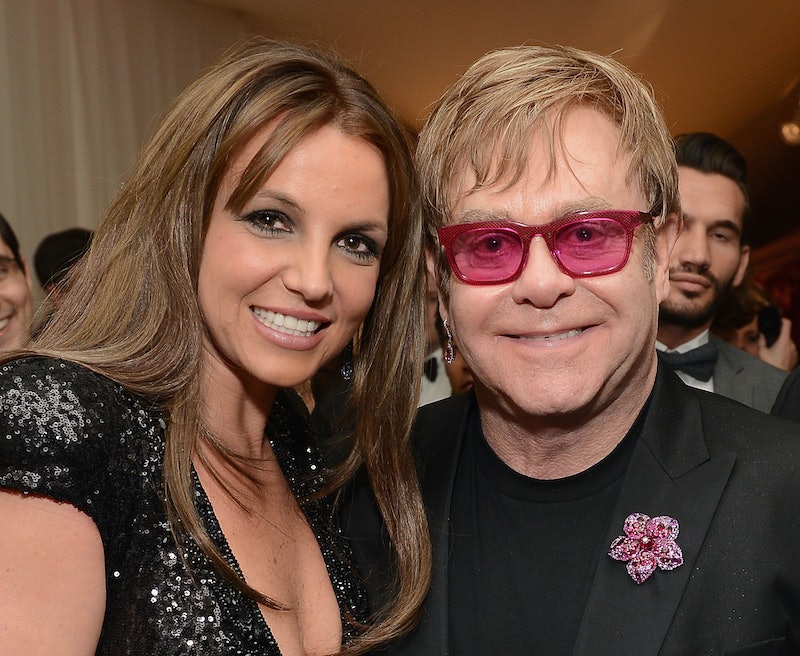 Britney Spears did it again. After she and Elton John released their “Hold Me Closer” collaboration on Aug. 26, the song — her first in six years — quickly shot to No. 1 on iTunes in the United States and several other countries. To celebrate her latest chart-topper, Spears shared a video message for John on Twitter.

“Hello Sir Elton John, we are, like, No. 1 in 40 countries,” the singer said in a British accent, before excitedly yelling, “Holy sh*t! I’m in the tub right now and I’m about to go have the best day ever and I hope you’re well.”

John, for his part, responded to Spears’ tweet, writing, “Hey Britney!! Thank you for this message. You’ve made my day!! Hope everyone has the best day dancing to our song! #HoldMeCloser.”

Earlier, the five-time Grammy winner also tweeted that he was “thrilled with the response” to the new track, which remixes his 1971 hit “Tiny Dancer” and 1991’s “The One.” Added John, “I wanted to do a fun, happy summer track so was ecstatic when [Britney Spears] agreed to be a part of it! She truly is an icon, one of the all-time great pop stars & I love her dearly. I hope you all love it!”

Because Spears and husband Sam Asghari were on their honeymoon at the time, the musician couldn’t travel to London to record her vocals but got the job done in less than two hours, per The Guardian. “Hold Me Closer” marks Spears’ return to music after a judge terminated her 13-year conservatorship in November, which John addressed in an interview with the British newspaper published on Aug. 25.

“She’s been away so long — there’s a lot of fear there because she’s been betrayed so many times and she hasn’t really been in the public eye officially for so long,” he explained. “We’ve been holding her hand through the whole process, reassuring her that everything’s gonna be alright.”

Ultimately, he hoped that the experience might inspire Spears to release even more new music. “I’m so excited to be able to do it with her because if it is a big hit, and I think it may be, it will give her so much more confidence than she’s got already and she will realize that people actually love her and care for her and want her to be happy,” John added. “That’s all anybody in their right mind would want after she went through such a traumatic time.”

So far, his prediction that “Hold Me Closer” would be a hit has proven to be true, and even fellow stars ranging from Kylie Minogue to Paris Hilton have already given the track a thumbs-up. Sharing an Instagram video of herself dancing and singing along to the song — around and on the hood of a bubblegum pink car while wearing a matching Barbiecore track suit, no less — Hilton wrote, “It’s Britney bitch…and the Queen is officially back!”

The Paris in Love star, who attended Spears’ June wedding, continued, “‘Hold Me Closer’ is out now and I will be playing it on repeat until further notice! ... So proud of you sis.”

More like this
Britney Spears Shares & Deletes Photos Of Justin Timberlake From 22 Years Ago
By Jake Viswanath
Britney Spears Shared The Real Reason She Shut Down Her Instagram Account
By Brad Witter
20 Years Ago, J.Lo Was Supposed To Kiss Madonna With Britney At The VMAs
By Jake Viswanath
Beyoncé Just Announced Tour Dates: Here's How To Cuff Tickets To Her 2023 Shows
By Jake Viswanath
Get Even More From Bustle — Sign Up For The Newsletter
From hair trends to relationship advice, our daily newsletter has everything you need to sound like a person who’s on TikTok, even if you aren’t.