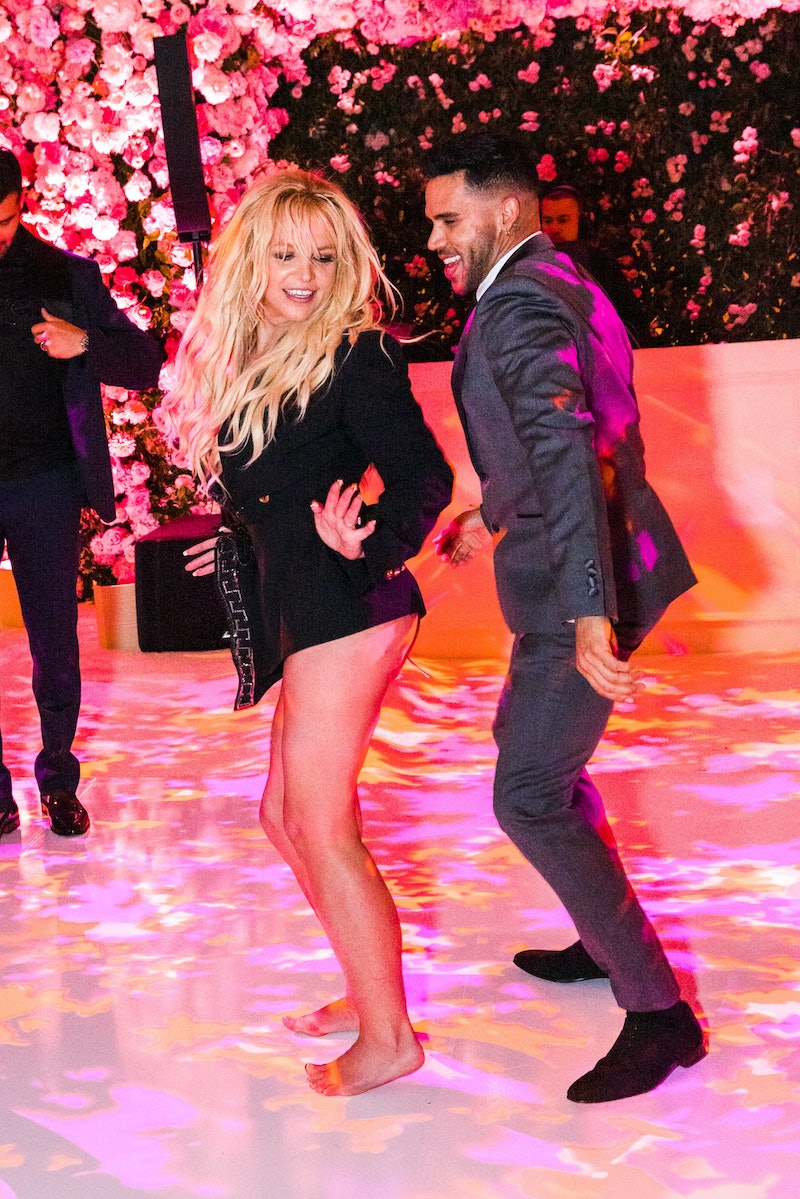 Weeks after their fairytale wedding, Britney Spears and Sam Asghari’s honeymoon is finally underway. But a lot like their June 9 nuptials (where Spears’ ex, Jason Alexander, gatecrashed and had a restraining order taken out against him), their trip hasn’t gone exactly to plan. On July 4, Spears posted an Instagram video of Asghari boarding a plane with their dog in tow. Once at their destination, the “Stronger” singer shared a clip of her spending time at the beach, set to Justin Bieber’s “Honest.” By the time she was writing her caption, though, the sunny weather turned to a downpour. “It’s raining cats & dogs,” she said, adding that “Of course on my honeymoon the suns not out!!!”

Even though the weather wasn’t totally ideal for a beachy getaway, Spears did find a way to make the most of it — and her way of coping includes a pretty iconic rom-com. “I’m watching Matthew McConaughey in How To Lose A Guy In 10 Days … which is my fave comedy of all time,” Spears wrote.

Spears has previously praised the other half of the on-screen couple that is Ben Barry and Andie Anderson: aka, Kate Hudson. The pair even seem to be friends, having spent some time together at a 2015 game night — and earlier this year, Spears described Hudson as one of the “most beautiful people I have ever seen in my life.”

As for movie snacks? Local produce from Spears’ undisclosed (but apparently tropical) destination. “Good God just the fruit here … its cold and when it registers on my tongue … it melts and puts me in bliss silence but there is still the smallest crunch sound with the watermelon,” she said. (Britney Spears food blog when?!) She also announced her intentions to “sing in the rain and possibly play in the muddy sand which is on my bucket list.”

Spears and Asghari had originally waited to take her honeymoon because of the big changes happening back at home — a new home, that is. As the musician explained in a June 22 Instagram post, she moved into a new house around the same time she got married.

More like this
Britney Spears Is About To Make Her Music Comeback With Elton John
By Jake Viswanath
Britney Spears & Sam Asghari Called Out Kevin Federline’s Claims About Her Kids
By Grace Wehniainen
Lauv Is No Stranger To Taylor Swift, Drake, Ed Sheeran, & Fame
By Alyssa Lapid
Beyoncé Sent Flowers To “Masterpiece Genius” Madonna After The “BREAK MY SOUL” Remix
By Grace Wehniainen
Get Even More From Bustle — Sign Up For The Newsletter