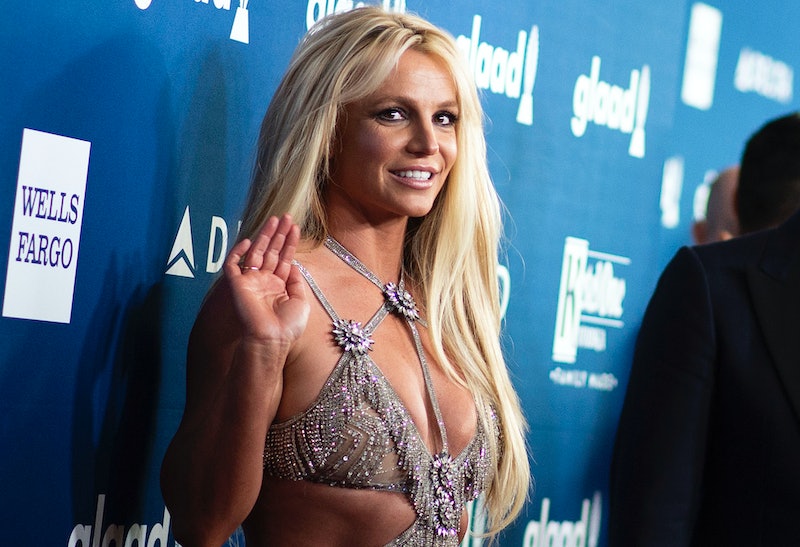 Three days after the bombshell premiere of FX and Hulu's Framing Britney Spears documentary, Britney Spears posted a new video addressing her Instagram followers directly. The latest New York Times Presents installment depicts the highs and lows of Spears' decades-long career, from her pop music stardom and the late-2000s breakdown that followed to her controversial court conservatorship and its confusing implications. Since the documentary dropped, many have been awaiting Spears' response as fans and celebrities voice their support for the #FreeBritney movement on social media and apologize for failing her.

The time finally came this afternoon. Wearing a black top with sheer sleeves and sporting dark eyeliner, the 39-year-old seemingly addressed the conversation unfolding online by not talking about the documentary at all. "The moment we've all been waiting for last week," Spears began. But she quickly made it clear that she's not going to expend any energy talking about the documentary series' latest. "The Super Bowl!" she shouted, slighting buzz surrounding Framing Britney Spears and the current condition of her mental health. She continued, "I was so excited. But honestly, I was rooting for [the] Kansas City [Chiefs], but I was also rooting for the other team [the Tampa Bay Buccaneers]. So, it was a little confusing for me." In the next cut, Spears whispered, "I love sharing!"

This isn't the first time Spears has posted on social media since the documentary's release. Over the weekend, she shared two additional videos with fans. On Feb. 6, Spears posted a brief clip of herself in a plaid button-down, denim capris, and Birkenstocks with socks. "Where is everybody?" she said, referencing the COVID-19 lockdown. Spears wrote on Instagram, "This is what we’ve all been saying this past year in quarantine 🤷‍♀️🤷‍♀️🤷‍♀️🤷‍♀️🤷‍♀️ !!!! Stay safe this weekend folks !!!!"

More like this
Britney Spears Celebrated Her Birthday With Loving Messages To Jamie Lynn & Her Sons
By Brad Witter
The Britney Spears Disney Princess Musical Is Finally Opening On Broadway
By Jake Viswanath
Taylor Swift Reacts To The Ticketmaster Controversy After Twitter Outrage
By Jake Viswanath
The 'Love, Lizzo' Harry Styles Scene Is Just 1 Moment That Made Fans Feel Seen
By Brad Witter
Get Even More From Bustle — Sign Up For The Newsletter