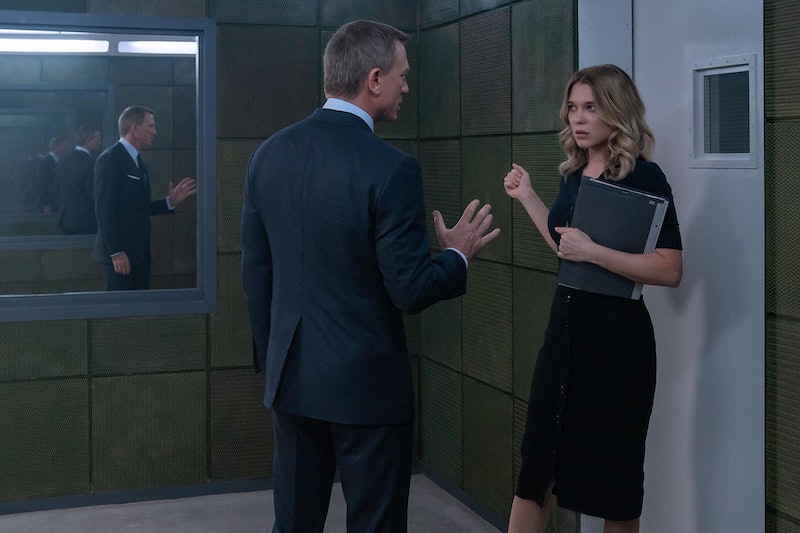 MGM Studios / No Time To Die

I have a horrible secret. When I was at school, I wrote an essay. About James Bond. And feminism. You’re right to shudder. I recently siphoned the essay off my old, beaten-up laptop, and gave it a read. In a piece of writing which rightly made my female teachers wince, I argued that Honeychile Rider, the ‘Bond girl’ in Dr. No, was actually a feminist icon. The fact that she first enters the novel naked was, I argued, "empowering." The fact that Bond only respects her when he’s likening her to a man was, I said, "deconstructing gender stereotypes." My teachers half-heartedly praised me for "being inventive," then slapped me with a generous C minus. In my defence, I was 15, and while I’m far from a fully-fledged intellectual now, I’ve developed enough to cringe when I think of it. I’ve changed since then. Lots of us have. But has James Bond changed too?

Modern men have a complicated relationship with Bond. That’s because Bond has always had a complicated relationship with women — men have just, until now, tended to turn a blind eye. This is troubling, when you consider that there are very few more enduring male role models than Bond: since Ian Fleming first dreamed him up in 1953, he’s been held up time and time again as a bastion of masculinity. He’s spawned one of the longest-running film franchises in the world, a series which regularly makes billions of dollars at the box office and idols out of its leading men. Yet only now – 26 films, 56(ish) books and 67 years later – is Bond starting to face up to a decidedly sexist legacy.

James Bond is sexist. That’s no secret. Just look at any of Fleming’s books, or any of the films, for evidence: the "man talk" scene; the descriptions of "blithering women who thought they could do a man’s work;" the existence of two totally unrelated characters called Octopussy and Pussy Galore. What’s most surprising, though, is how much Bond’s sexism has persisted, and how it’s created an extremely weird dichotomy in the recent films: they want to make it clear that they know they’re sexist, even if they’re not doing much about it. In the Pierce Brosnan era, M calls him a "sexist, misogynist dinosaur," but he doesn’t seem to care. He’s too busy flirting with Xenia Onatopp, who crushes men to death with her thighs, or a skimpy tank top-touting scientist called, ahem, Dr. Christmas Jones. "I thought Christmas only came once a year," Brosnan quips after — well, you can probably guess.

You’d think post-Brosnan Bond might be a bit better. After all, Daniel Craig himself echoed M’s sentiments in an interview with Esquire, calling the character a "lonely, sexist misogynist." His solution? "Cast great actresses and make the parts as good as you can for the women in the movies." Yet for every bit of nuance in Craig’s Bond films, there’s still a touch of hypocrisy. Just look at Casino Royale, a film in which Bond’s seduction results in violent drownings for not one, but two separate female characters. It’s the old Bond girl character arc, played out once again by Gemma Arterton’s character in follow-up Quantum of Solace: they have sex with him, then they die to serve the plot. Casino Royale even keeps Bond’s reaction to Vesper Lynd’s death, verbatim from the 1953 book: "The bitch is dead."

It’s understandable that, for many, Bond has started to leave a bad taste in the mouth. But it’s only recently that producers have begun to do something about it. It figures. And perhaps it is unfair to judge Craig’s first forays into the world of Bond by post-#MeToo standards. Casino Royale came out in 2006. For context, that’s almost a decade before the discontinuation of Page 3, a full seven years before the release of Robin Thicke’s Blurred Lines, and at least three full years before I wrote my essay expounding Ian Fleming’s feminist virtues. As I said: I’ve changed. I swear. Whilst I used to envy Don Draper, now I wish to be more like real-life Jon Hamm. And with the cultural shift we’ve seen over the last decade, plenty of men have changed with me. It’s no surprise, then, that Bond is changing too.

Let’s talk about post-Skyfall Bond, the 2012-onwards Bond who parachuted into the Olympic opening ceremony with the Queen in tow. The Bond of Skyfall and Spectre is responsible for no post-coital drownings – in fact, he’s kept a steady girlfriend for a two film streak, played masterfully by Léa Seydoux, with a complex backstory and everything. This Bond is respectful to Miss Moneypenny, who even gets a first name (it’s Eve). This Bond even takes his mum – well, Judi Dench’s M, but it’s basically the same thing – on cross-country road trips to the Scottish Highlands. He’s thoughtful, principled, and almost entirely lacking in lascivious jokes. Bond is, finally, something close to the man of today, finally.

There are those who hope for the discontinuation of Bond. Time’s Up for James Bond, declared the Guardian in 2018. There’ve been calls to replace the character with a woman (Gillian Anderson has a strong fan base), or to scrap him entirely in favour of more contemporary action heroes (here’s looking at you, John Wick). And while long-time producer Barbara Broccoli told Variety "there’ll never be a female Bond," she definitely seems in favour of shaking off his old-fashioned trappings. "We don’t have to turn male characters into women," she says. ‘Let’s just create more female characters and make the story fit those female characters." And she’s put her money where her mouth is, at least when it comes to this year’s No Time To Die. Not only was Fleabag creator Phoebe Waller-Bridge enlisted to polish off the script, but British actor Lashana Lynch has a starring role as the first black woman to hold the title of 00 agent.

Still, the question persists. Is it enough? There are those who’d argue that the continued existence of Bond itself is proof that we haven’t yet shaken off sexism. Can’t men aspire to be something better? Ideally, yes. But perhaps Bond can be a conduit for that. At the risk of repeating myself, I’ve changed. We’ve all changed. And Bond can change too. If not by changing gender, then by changing what he stands for. Good male role models do exist in modern cinema – look at Chris Pine in Wonder Woman, Johnny Flynn in Emma, Chadwick Boseman in Black Panther and Jake Gyllenhaal in, well, everything except Nightcrawler. These are decent guys who don’t make disparaging comments, and definitely don’t ditch women to unceremonious post-coital drownings.

Sure, men will always aspire to be James Bond. But James Bond will also always be informed by men’s aspirations. If men aspire to be decent, respectful, generally good, it makes sense that Bond would change to reflect that. So, if he takes a leaf out of his peers’ book, perhaps Bond can genuinely become an unexpected beacon of "being a good bloke."

Or perhaps I’m wrong. Perhaps he’ll always be a sexist dinosaur. And perhaps I’ll cringe just as hard when I read this back in 10 years’ time.