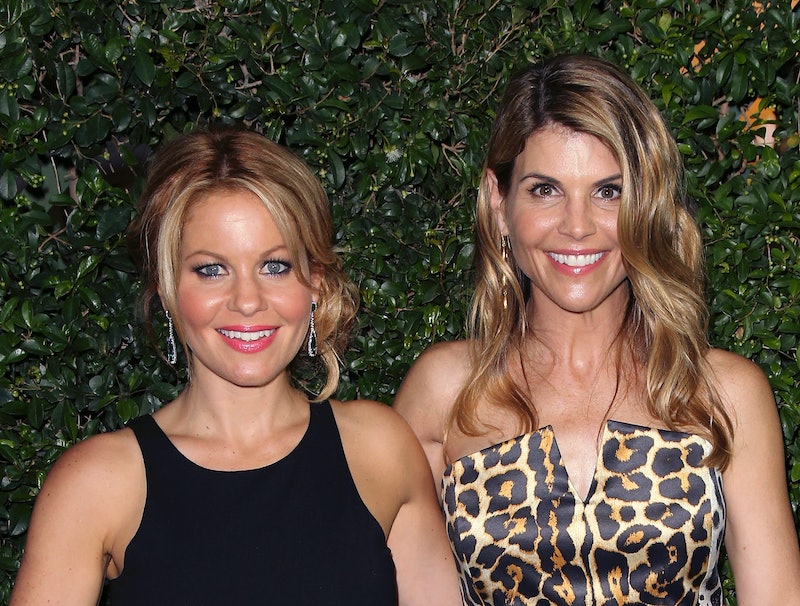 Now that it's been decided Lori Loughlin and her husband, Mossimo Giannulli, are going to serve time in federal prison for their involvement in the University of Southern California admissions scandal, many are giving their opinions about their short sentences. One criticism even got the attention of the Full House star's TV niece. Candace Cameron Bure reacted to a comment about Loughlin's sentencing by using one single emoji.

On Aug. 21, Entertainment Tonight posted on Instagram about the five-month sentencing of Giannulli, to which one Instagram user reacted, "They should have 4 years each for the college kids that should have gotten in — ugh." Cameron Bure responded with a sad face emoji. She may have not commented directly about Loughlin's sentencing, but the emoji seems to be the former Fuller House star's way of expressing her sadness about the entire situation.

Prior to the couple's sentencing, Cameron Bure opened up about Loughlin and Giannulli paying $500,000 in bribes to get their daughters, Isabella Rose and Olivia Jade, into USC under the guise of being rowing team recruits. Cameron Bure told the Today show in August 2019, "It's too personal to us. We would never want to talk about someone that’s such a dear and close friend. I've already said that we are family and we stand by each other and pray for each other and we'll always be there for each other."

Many have criticized Loughlin and her husband's short jail times, just as they did when Felicity Huffman only served 11 days of her two week-sentencing as a result of the college admissions scandal. The Desperate Housewives star pleaded guilty to one count of conspiracy to commit mail fraud and honest services mail fraud in May 2019. Huffman also took "full acceptance of her guilt" and "responsibility" for her actions.