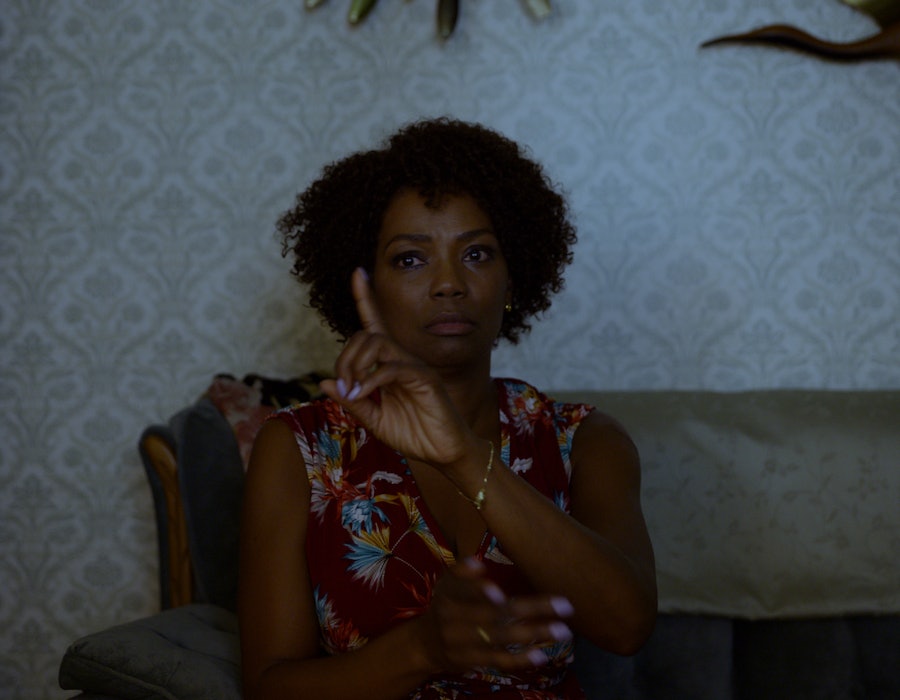 Vanessa Estelle Williams is a self-proclaimed “scaredy cat.” Always wary of horror movies, she didn’t dare watch the likes of The Exorcist until she was well into adulthood — and even then, “I was watching from behind my fingers,” the actor tells Bustle. And yet, in her professional life, she finds herself taking one blood-spattered role after another.

Her two latest projects, the box-office hit Candyman and an episode of American Horror Stories, are terrifying — as was the first Candyman, released in 1992. Williams was cast in Bernard Rose’s movie as Anne-Marie McCoy, a single mother living in Chicago’s Cabrini-Green projects (the real Chicago neighborhood that hosts Candyman’s fictional reign of terror). Almost 30 years later, Williams returns to a very different Cabrini-Green in the newly released sequel, directed by Nia DaCosta and produced by Jordan Peele.

Like Cabrini-Green, now filled with $6 coffees and buzzy art galleries, the ethos of Candyman has evolved. Rather than jump scares and hook-tears (of which there are many), the new film is interested in another type of terror — one even more horrifying, Williams says, than the slasher flicks she can barely stomach. “Of course it’s scary to see bodies ripped apart with a hook, but there is a long history of violence against my community. Even gentrification is an act of violence against these communities of color, and how they come back to re-colonize these spaces,” Williams says. “The film goes out of its way to not re-traumatize the audience it’s trying to serve, [which can] only come from people who look like me.”

Not everyone feels this way. Many writers, particularly Black film critics, are panning Candyman for the same reasons Williams applauds it, arguing that it oversimplifies and whitewashes the centuries of brutality Black Americans have endured. They’ve questioned who exactly the film is intended to serve. But no one person can speak for an entire community — and to Williams, Candyman is a movie made by and for Black people.

Below, Williams discusses how Candyman and his world have transformed in tandem with our own, and why she believes this new film has the power to heal.

Take me back to when you were filming Candyman in 1991. What did your life and career look like at that point?

I was around 28 years old. I finished my second play on Broadway and was opening my first feature film, New Jack City. I had just arrived in Los Angeles.

I’m a New Yorker, do or die. I’m a Brooklyn girl, and while I wasn’t looking for some great escape, I did feel like it was time to check out Hollywood ... Candyman was one of the first auditions I had when I got there. I had no expectations — I came in, did the audition, and waited for them to call me. It was marvelous to finally get that call and know I’d be doing another feature film. It was a great segue to the next phase in my career.

Where in Brooklyn are you from?

Bed-Stuy. I grew up on a street between Patchen and Ralph.

There are a lot of parallels between Bed-Stuy and Cabrini-Green.

For sure. In the original film, Bernard Rose brought me to Chicago so I could research. My scenes weren’t even shooting there — they actually re-created the Cabrini-Green projects in California for the film. Cabrini-Green was a daunting space — there were bars on every window, and there was all this apprehension about where we were going and where production was moving. I remember thinking if there would still be this foreboding energy as we walked in if the production wasn’t predominantly white. Physically, the place would’ve been the same, but I still wonder, even now having gone back to the new film all these years later.

When we got there, I met the person my character is based on. She was this wonderfully warm person, and her apartment was bright and well-organized and orderly. She reminded me of the women I knew in Brooklyn, like the working-class families I grew up with. Growing up in Bed-Stuy, there were also a lot of negative stereotypes about the neighborhood that were antithetical to my experience. It was home for me. I never felt the ominous energy that many people said was there. I feel similarly about the people living in Cabrini-Green and all marginalized communities.

Candyman is rooted in broader social issues, and there are elements from the first film that tie into the new one.

The way the movie plays with mirrors and reflections, and how this film expands on that from the original, was really well done. Not all reflective surfaces are mirrors — there are windows and makeup compacts that also give way to Candyman. [Editor’s note: Traditionally, Candyman is summoned after characters say his name in a mirror.] It also serves the audience, to guard them from being so traumatized. All of the violence is indirect, if that makes sense. It’s a great way to heighten the terror, and that has to do with Nia DaCosta’s vision and her aesthetic as a director, as well as Jordan Peele.

What was the energy like on the set of the new Candyman? How did it differ from the first time around?

Well, all these Black faces in the new one made me feel very warm and welcomed! My experience on the first Candyman set was still fantastic. It was only my second film, and there were no regrets on my part or anything overwhelmingly negative about it. But the biggest difference was that the script felt more potent in terms of reflecting the times. This film is about reclaiming the story of Candyman and delving into Black trauma and its history.

What’s it been like to see — and now be a part of — the renaissance of horror movies addressing social issues?

It’s marvelous. As an artist and actor, I want to continue to grow. That’s always been my desire and mission. I want to use my talent to make the world better, and to heal myself and my community. I feel so humbled and grateful for the opportunity to be part of this next wave ... I’m grateful to have witnessed and been part of the change.

At [a panel for Candyman called “The Impact of Black Horror”], Tananarive Due was one of the panelists, and she said, “This remake of Candyman can help us heal.” And I think so too. This movie was supposed to be released before the murder of George Floyd, which is just one of many violent incidents that have occurred and still occur. Ian Cooper, one of our producers, expressed concerns about what this film will mean after what we’ve been through the last year, both in the pandemic and the murders of innocent Black people. I feel this film has the power to move us toward healing and will keep us going. There is a reckoning happening now that is so valuable and necessary that cannot be moved.